Justices to examine importance of compliance with Copyright Office formalities

It is fair to expect that the argument on Monday in Unicolors v. H&M will be a real mess. The basic problem is that the parties disagree so much about what issues are before the court that I have to give you paragraphs of introduction before you can even have a good sense of what issues the court might consider.

Let’s start with the idea of copyright formalities. Traditionally, the United States (and Great Britain), unlike most countries, have conditioned copyright protection on formalities like putting a copyright notice (©) on the work, depositing a copy with the Library of Congress, and (of importance here) registering the work with the Register ([sic] – not the Registrar) of Copyrights. Generally speaking, the author of a work has a valid copyright even if it ignores all of those formalities. The only reason to comply with the formalities is a variety of limitations on the ability to enforce the copyright in litigation without first complying with those formalities.

Registration of course requires the registrant to fill out a form with various pieces of information about the work of authorship. Inevitably, those forms include errors. Congress recently adopted a rule (in Section 411(b) of the Copyright Act) that tells courts when those errors should make the registration ineffective. That provision says that a certificate of registration is effective unless the applicant included “inaccurate information … on the application … with knowledge that it was inaccurate.” The statute provides that a court to which it “is alleged” that such an inaccurate application was made should refer the matter to the Register of Copyrights. The certificate will be effective unless the register responds that she would have denied registration had she known the true information.

This case involves an allegation of copyright infringement brought against H&M, the multinational clothing retailer, by Unicolors, a fabric-design company and frequent copyright plaintiff (pejoratively labelled a “troll” by H&M and its supporters). Unicolors in recent years has brought hundreds of copyright infringement suits against such diverse parties as Amazon, Dillard’s, JCPenney, Neiman Marcus, Nordstrom, and Walmart.

The parties bitterly disagree about the underlying historical facts, but it is clear that Unicolors registered a set of 31 fabric designs with a single filing. The filing listed the date of publication for the designs as Jan. 15, 2011. On that date, some of the designs were available for public viewing in its showroom but others were not. Later, H&M sold a jacket with a design that was strikingly similar to one of the registered designs. 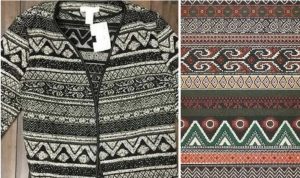 Unicolors sued H&M for copyright infringement. Eventually, after a jury trial (that it lost), H&M argued that the registration was invalid. The parties don’t agree as to exactly what H&M’s complaints have been – but in the Supreme Court H&M emphasizes allegations that some of the 31 designs had not been published on Jan. 15. If they in fact were not available for public viewing, that is almost surely correct. Also, it seems pretty clear that the differential treatment of the designs made it inappropriate under the register’s regulations to file all the designs in a single registration. Faced with those allegations, the court of appeals remanded the case to the district court with instructions to refer the matter to the register under Section 411.

Seeking review, Unicolors asked in its cert petition whether referral was appropriate in the absence of “indicia of fraud or material error” in the application. After hiring new counsel at the merits stage, Unicolors briefed the question whether the “‘knowledge’ element [in Section 411] precludes a challenge to a registration where the inaccuracy [reflected a] good-faith misunderstanding of a principle of copyright law.” Basically, Unicolors argues that it couldn’t know that information on an application was false if the only errors in the application were purely legal – if Unicolors in fact believed that everything on the application was correct.

H&M argues forcefully that the case is a classic “bait-and-switch,” that Unicolors got the justices to review the case by alleging a circuit conflict about “intent to defraud” as a requirement for a referral, and that the retention of elite Supreme Court counsel at the merits stage has led to a choice of a different challenge to the decision below. H&M’s central argument is that the question that Unicolors presents in its brief is so far removed from the question on which it sought review that the case is not properly before the justices. Moreover, it presents a strong case that Unicolors’ arguments were not even presented to the lower court, much less decided. Finally, H&M argues that all now agree on the answer to the question on which the justices granted review: H&M need not establish that the applicant intended to defraud the register.

I expect that the court’s reaction to the bickering between Unicolors and H&M will be influenced by an amicus brief supporting H&M from a group of distinguished law professors. They say relatively little about the legal issues that the parties debate, but rather decry the systemic problem that copyright trolls pose for the copyright system, presenting statistics about the large share of copyright litigation brought by a small number of plaintiffs, and the powerful incentives defendants face to settle even patently meritless claims. I would be surprised if the large group of justices traditionally skeptical about the value of speculative securities litigation do not take a visceral skepticism about Unicolors from that filing.

This case should produce a lively argument, as the justices are certain to probe the allegations that the positions Unicolors now advances are just not fairly included in the questions on which it sought review. Those questions are so inherently fact-laden that it is hard to be sure what the justices will conclude. It is hard to doubt, though, that Unicolors has moved quite far from the arguments it advanced in the petition and in the court of appeals. If the justices come away from the argument uncertain that the court of appeals was faced with (and answered) the contentions that Unicolors now presents, there is a very real chance the court will dismiss the case from its docket as “improvidently granted.” We’ll know a lot more about the court’s likely approach by Monday afternoon.