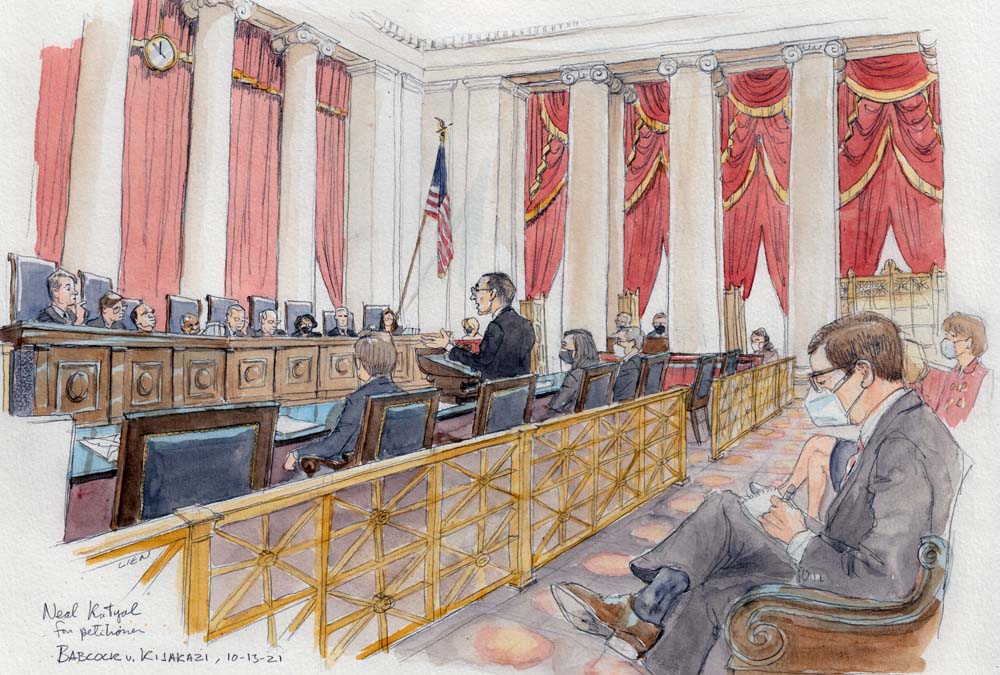 Wednesday’s argument in Babcock v Kijakazi displayed a bench still uncertain about how to resolve a problem about the Social Security benefits available to a small group of National Guard workers.

The case involves a special rule that protects certain members of the “uniformed services” from a rule that limits Social Security benefits for people with irregular work histories over the course of their lifetime. The argument on Wednesday suggests that the resolution of the matter will emphasize the specific language of that rule, which protects any “payment based wholly on service as a member of a uniformed service.” The case involves a group of about 50,000 people still living who worked before 1984 as a “dual-status military technician.” Although paid as civilians, those technicians provide a variety of services involving the National Guard and are obligated to maintain membership with an appropriate rank in the National Guard and to wear the corresponding uniform while on duty. At bottom, the question is whether the pay they receive for that work is “wholly” based on service “as” a member of a uniformed service, even though much of it is civilian rather than military work.

None of the justices seemed to approach the case with certainty. Two main threads of analysis dominated the argument. For Chief Justice John Roberts, it seemed obvious that some of the pay was for the serviceman’s work “as” a member of the National Guard, but much of it was for the various civilian duties of his technician status. He pointedly asked Neal Katyal (counsel for the serviceman, David Babcock): “Why is he receiving a civilian pension and a military pension? … If your argument is right, it would seem that it would be all military. … It is a dual position, so part civilian, part military. And I don’t understand how you can have that and now argue that it’s all military.”

For Roberts, because Babcock “is not acting as a member of the National Guard of the United States all the time,” his salary as a dual technician is not a payment “wholly” for work “as” a member of that service. Justice Elena Kagan – the only justice who seemed to state a settled view during the argument – seconded Roberts’ perspective, commenting “that we can sort of make this simpler” by following his lead, “and this is the way I read the language too.”

Conversely, Justice Neil Gorsuch found most relevant the statutory requirement that dual technicians must be members of the National Guard. In a colloquy with Nicole Reaves (appearing on behalf of the government), Gorsuch commented that “the work may be civilian for a bunch of other purposes, but it can only be performed by someone who is serving in the capacity of a National Guardsman.” And so, he reasoned, “if the work … can only be performed by someone who is a member of the National Guard, why doesn’t that take care of the word ‘wholly’ for you?” Gorsuch pressed his perspective emphatically and repeatedly, consuming about half of Reaves’s time before commenting that he was “beating a horse that’s pretty dead, I think.”

Still, unable to wait out the waning minutes of the argument, he returned in the last moments of her time to ask whether, “if no man alive can figure this out, does the veterans canon have any role to play here,” referring to the principle that ambiguities in statutes regarding the benefits afforded veterans should be construed in favor of the veterans. When Reaves predictably insisted that the statute was not ambiguous, Justice Brett Kavanaugh chimed in with his lone comment of the argument – asking her to acknowledge that such a canon does exist.

The argument was so devoid of deep-seated conviction or detailed analysis that it is hard to draw any firm conclusions about a likely outcome. It is fair to say that a few of the justices (Roberts and Kagan) start more likely to rule for the government, and one or two (Gorsuch and perhaps Kavanaugh) start as more likely to rule for the claimant. But all of the views seemed sufficiently tentative that a unanimous result in either direction would be no more surprising than any divided outcome in between. One thing I can say, though, is that I can’t see this case lingering much past the turn of the year.