A search for coherence in the interplay between AEDPA and Brecht 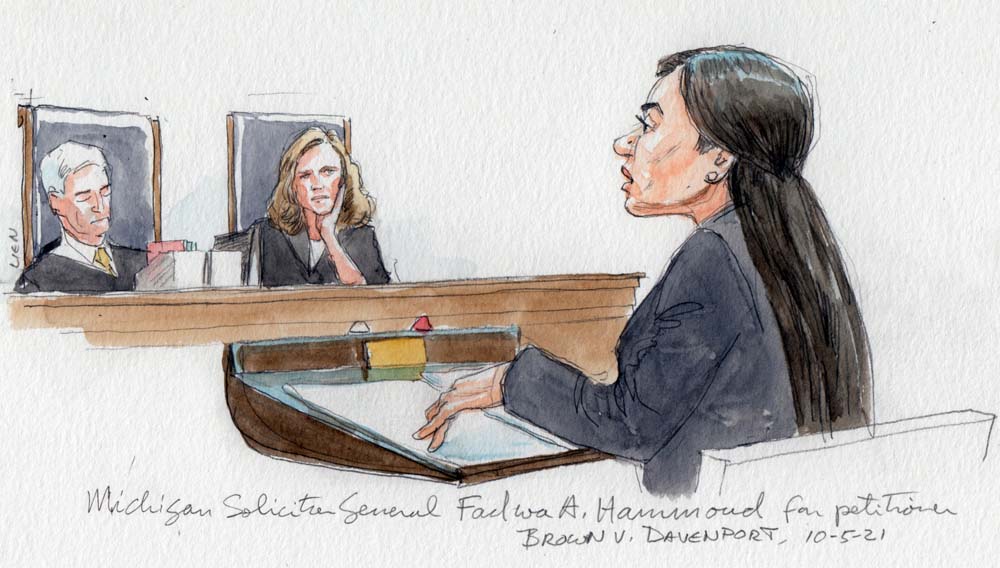 The Supreme Court heard oral argument Tuesday in Brown v. Davenport to consider whether a Michigan prisoner, whose constitutional right to a fair trial was violated when he was visibly shackled before the jury, is entitled to habeas corpus relief. Both sides agree that there was a constitutional violation when Ervine Lee Davenport was shackled in front of the jury while facing a murder charge. The dispute centers on whether that error was harmless and, more specifically, what test a federal habeas court should apply when addressing a state prisoner’s claim that the state courts incorrectly deemed a constitutional violation harmless.

As the case preview explained, in Brecht v. Abrahamson the Supreme Court adopted a harmless-error standard for federal habeas review, holding that a habeas petitioner is not ordinarily entitled to relief unless a constitutional violation had a “substantial and injurious effect or influence on the verdict.” Three years later, Congress passed the Anti-Terrorism and Effective Death Penalty Act, which required federal habeas courts to show deference to state courts’ constitutional decisions. Under AEPDA, habeas relief is only available to a prisoner whose claims were adjudicated on the merits in state court if the prisoner can show that the last reasoned state court decision was contrary to or involved an unreasonable application of Supreme Court precedent. But what if, as in Davenport’s case, the last reasoned state court decision was one finding a constitutional error harmless? Does the state prisoner have to satisfy both AEDPA and Brecht, or is Brecht alone enough?

During Tuesday’s argument, the justices seemed to struggle to find an answer to that question that is coherent and also consistent with precedent and AEDPA’s deference to state court decision-making. Justice Stephen Breyer was the most upfront about the complexities involved, stating, “I have a terrible time understanding where all these different standards are and how they fit together … and I doubt that a lot of habeas judges will understand it either.” But Fadwa Hammoud – the solicitor general for the state of Michigan – argued that instructing lower courts to formally apply Brecht and AEDPA separately would provide the necessary guidance and was the only way to show proper deference to state court decision-making.

Many of the justices seemed to agree. Chief Justice John Roberts emphasized that AEDPA created “a sea change in habeas law” that required federal judges not just to consider their own opinions but to show deference to the reasonable judgments of state court judges. Justices Clarence Thomas and Samuel Alito focused on the fact that AEDPA was a statute that post-dated the Supreme Court’s equitable harmless-error decision in Brecht, and both justices asked litigants if the statute should take precedence if there is a conflict between the two. Neither Hammoud nor Tasha Bahal – counsel for Davenport – were willing to say that a conflict existed. Both attorneys argued that AEDPA and Brecht should both apply to state prisoners’ claims. But Bahal claimed that, in a case like Davenport’s where the sources that the lower federal court relied on were all permissible sources under AEDPA, a finding of harmful error under Brecht automatically satisfies AEDPA.

Justices Sonia Sotomayor and Elena Kagan seemed sympathetic to Davenport’s view. Their questions suggested that there was a hierarchy of harmless-error standards and that a finding under Brecht that a constitutional violation had a substantial and injurious effect on the verdict necessarily meant that no fair-minded jurist could find the error harmless beyond a reasonable doubt under Chapman v. California. That would make the resulting state court decision unreasonable under AEDPA. Kagan suggested that the court’s prior decisions in Fry v. Pliler and Davis v. Ayala already held that Brecht alone was enough, prompting Hammoud to argue that neither Fry nor Ayala directly addressed the question.

Ultimately, Kagan expressed doubt about how much was at stake, asking Hammoud if there had ever been a case where a court wanted to grant relief under Brecht but could not because the state prisoner’s claim failed under an AEDPA/Chapman analysis. Hammoud admitted that there was no prior case, but argued that Davenport’s case could be that case.

It is unclear after oral argument whether Davenport will get Breyer’s vote. He, along with Alito and Roberts, seemed convinced that Brecht and AEDPA address different questions. He and Alito posed hypotheticals to Bahal involving cases where a federal judge personally believed that a constitutional trial error had a substantial and injurious effect on the verdict but simultaneously thought a fair-minded jurist could reach the opposite conclusion. Bahal likened such a situation to a prosecutor arguing during closing arguments that there is more than a reasonable possibility that the defendant is innocent but that the state had still proved him guilty beyond a reasonable doubt. But, Alito responded, there is a difference between a federal judge’s personal judgment and his sense of what another fair-minded jurist could do. Hammoud agreed. She repeatedly emphasized the differences between the inquiry under Brecht – where a federal judge may exercise her own independent judgment and where there are no limits on the sources that the judge can consider – and the inquiry under AEDPA – where a federal judge must show deference to the state court judgment and where the record and the sources of law upon which the federal judge may rely are more limited.

Very little argument time was focused on how to conduct an AEDPA inquiry in Davenport’s case if one is ultimately required. Sotomayor suggested a remand would be appropriate if the court concluded that a separate AEDPA analysis was required, but both sides have argued that they should win outright at the Supreme Court. We will have to wait until later in the term to see if the court is able to address Breyer’s concerns and fit all of these standards together in a way that provides clarity and guidance to lower courts.

Recommended Citation: Eve Brensike Primus, A search for coherence in the interplay between AEDPA and Brecht, SCOTUSblog (Oct. 6, 2021, 3:05 PM), https://www.scotusblog.com/2021/10/a-search-for-coherence-in-the-interplay-between-aedpa-and-brecht/