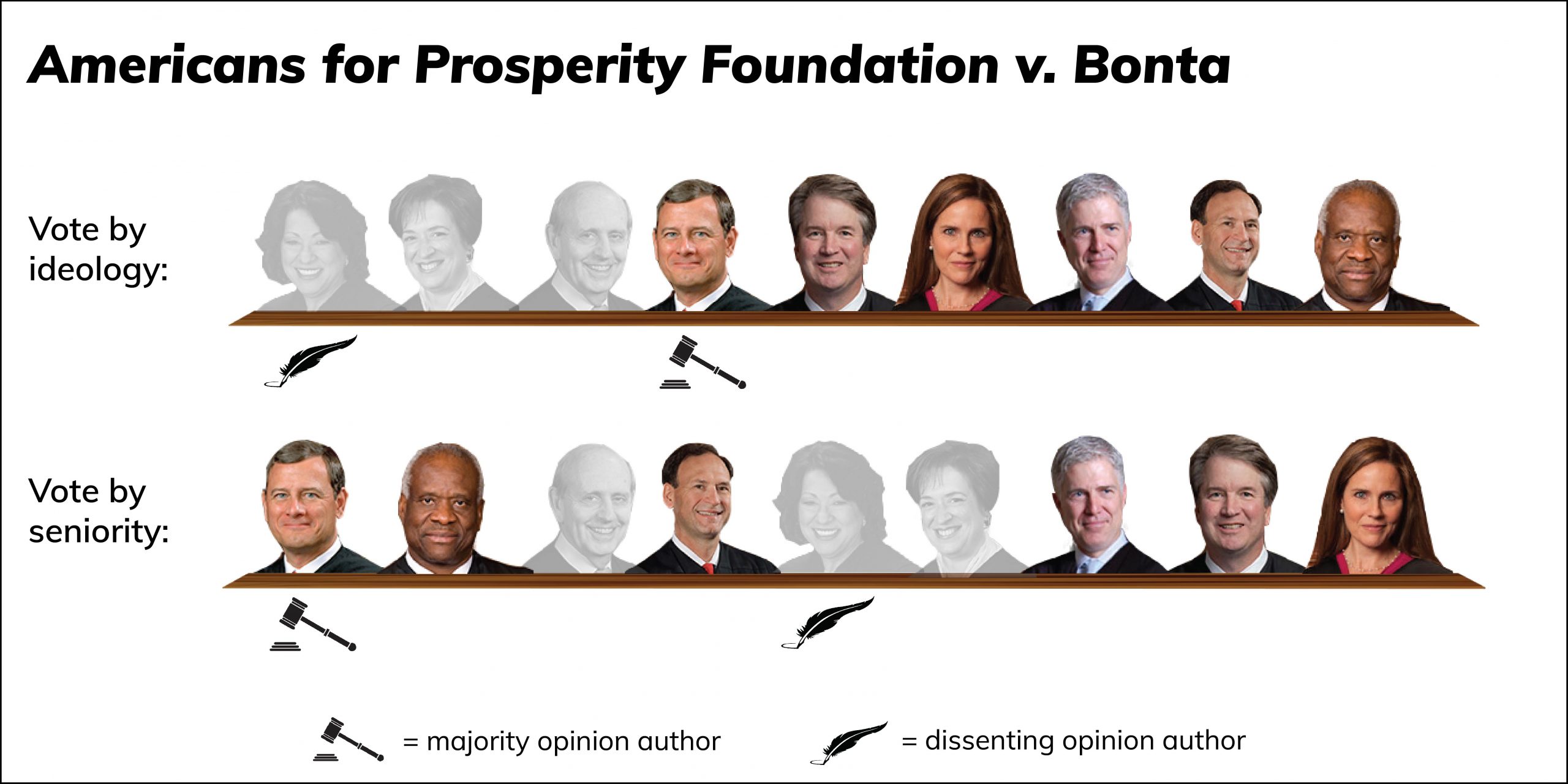 This article was updated on July 1 at 6 p.m.

The Supreme Court on Thursday struck down California’s requirement that charities and nonprofits operating in the state provide the state attorney general’s office with the names and addresses of their largest donors. The 6-3 ruling in Americans for Prosperity Foundation v. Bonta was a major victory for the two nonprofit challengers, which had argued that the rule violates the First Amendment by deterring their donors from making contributions. In a dissent, Justice Sonia Sotomayor suggested that the ruling could have an effect beyond the nonprofit and charitable spheres, including on campaign contributions, writing that the ruling “marks reporting and disclosure requirements with a bull’s-eye.”

The dispute before the court began in 2014, when two conservative advocacy groups – the Thomas More Law Center, a Christian public-interest law firm whose founders include Domino’s Pizza founder Thomas Monaghan, and the Americans for Prosperity Foundation, a nonprofit group linked to the influential conservative billionaire Charles Koch – went to federal court to challenge the disclosure requirement. A federal district court agreed with the groups that the requirement violates the First Amendment, but a panel of the U.S. Court of Appeals for the 9th Circuit reversed. It concluded that the policy, which requires charities to provide the state with the same information that they already give to the IRS, was related to an important state interest in policing charitable fraud. The court of appeals acknowledged the groups’ concern that their donors might face “substantial harassment” if their contributions became public – but, the court of appeals stressed, the state collects the information only for its own uses. After the full 9th Circuit refused to reconsider the panel’s ruling, the groups went to the Supreme Court, which agreed in January to take up the case.

In an opinion by Chief Justice John Roberts, the Supreme Court reversed the 9th Circuit. Roberts began by addressing a threshold issue: What constitutional test should courts use to review a First Amendment challenge to a compelled-disclosure requirement? In a part of his opinion joined only by Justices Brett Kavanaugh and Amy Coney Barrett, Roberts rejected the challengers’ argument that the most stringent constitutional test, known as strict scrutiny, should apply. Instead, Roberts wrote, courts should use “exacting scrutiny,” which looks for a “substantial relation between the disclosure requirement and a sufficiently important government interest.” But, he continued, although exacting scrutiny does not require a disclosure requirement to be the least restrictive way for a state to achieve its goals, it does require the disclosure rules to be narrowly tailored – that is, closely drawn to target only the problem or interest at issue.

Roberts acknowledged that “California has an important interest in preventing wrongdoing by charitable organizations.” Of course, Roberts agreed, the government needs to be able to protect people from fraud. But there “is a dramatic mismatch,” Roberts continued, between the desire to prevent fraud and California’s donor-disclosure requirement: Although the state requires “nearly all” of the 60,000 charities that do business in the state to file the form that contains information about their top donors, Roberts noted, “that information will become relevant in only a small number of cases” after complaints have already been filed. The state does not rely on those forms to initiate investigations, and there are other ways for the state to obtain the forms if it needs them after the investigations are underway. “In reality, then, California’s interest is less in investigating fraud and more in ease of administration,” Roberts concluded.

Roberts reasoned that it was appropriate for the court to deem the disclosure requirement invalid in all circumstances, rather than only in the challengers’ case. In First Amendment cases, he explained, the Supreme Court has allowed challengers to seek to invalidate a law in its entirety “if a substantial number of its applications are unconstitutional.” That is the case here, Roberts wrote, because the problems in the state’s scheme will be present in every scenario. “Every demand” for information “that might chill association,” Roberts stressed, is therefore unconstitutional.

Justice Clarence Thomas joined most of the Roberts opinion and agreed that the disclosure requirement should be struck down, although he expressed doubts that the court should have deemed the requirement unconstitutional in all cases.

Like Thomas, Justice Samuel Alito agreed with the result that the court reached, even if he too parted ways with the Roberts opinion on some of its reasoning. In an opinion joined by Justice Neil Gorsuch, Alito explained that he was “not prepared at this time to hold that a single standard applies to all disclosure requirements,” and he did not agree that the Supreme Court’s cases “have broadly resolved the question in favor of exacting scrutiny.” But, he concluded, it ultimately didn’t matter which standard applies in the case, because either way the disclosure requirement should be struck down.

Roberts rejected the state’s argument that the disclosure requirement did not broadly discourage donations because the forms are kept confidential. He noted that although “assurances of confidentiality may reduce the burden of disclosure to the State, they do not eliminate it.” And in a footnote, he rebuked California, adding that “the State’s assurances of confidentiality are not worth much.” The groups here, Roberts indicated, have “introduced evidence that they and their supporters have been subjected to bomb threats, protests, stalking, and physical violence.” Roberts added that “[s]uch risks are heightened in the 21st century and seem to grow with each passing year, as ‘anyone with access to a computer [can] compile a wealth of information about anyone’ else, including such sensitive details as a person’s home address or the school attended by his children.”

Justice Sonia Sotomayor dissented, in an opinion joined by Justices Stephen Breyer and Elena Kagan. Sotomayor lamented that although the court normally “requires that plaintiffs demonstrate an actual First Amendment burden before demanding that a law be narrowly tailored.”  But with Thursday’s ruling, she contended, “reporting and disclosure requirements must be narrowly tailored even if a plaintiff demonstrates no burden at all.” Sotomayor agreed with Roberts that the challengers in this case “have shown that their donors reasonably fear reprisals if their identities are publicly exposed,” and she indicated that she would be “sympathetic” if the court opted to rule for the specific challengers on their claims. But because “the Court’s decision,” she contended, “is not nearly so narrow or modest,” she instead dissented.