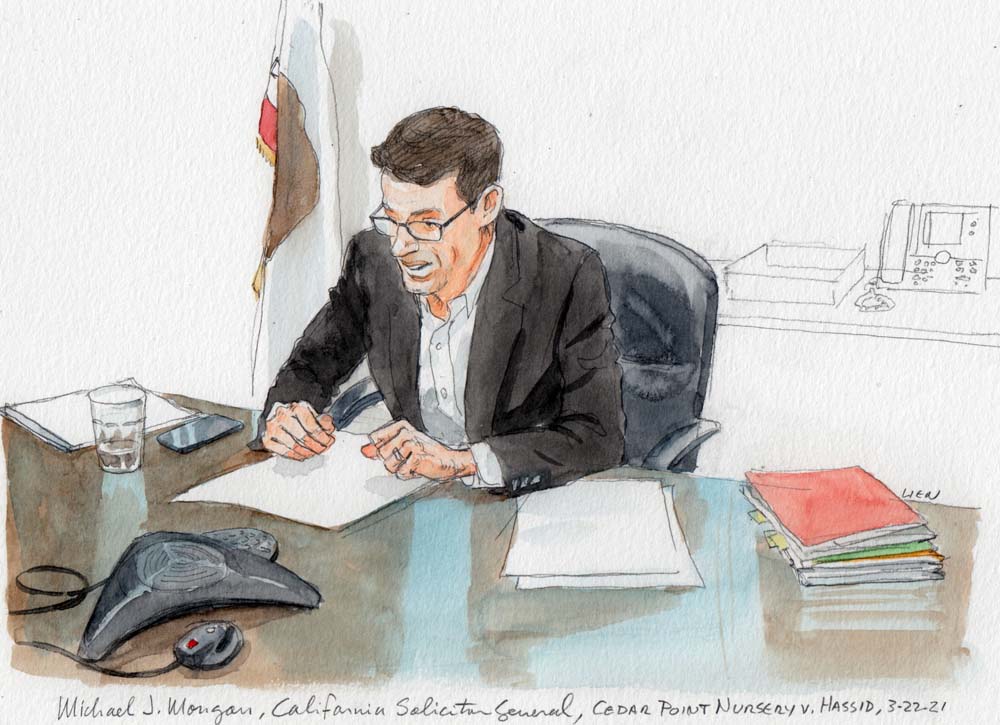 Update (Monday, March 22, 6:30 p.m.): This article has been updated with expanded analysis.

The Supreme Court heard oral argument on Monday in a clash between property rights advocates and union organizers. The dispute in Cedar Point Nursery v. Hassid centers on a nearly half-century-old California regulation that allows union organizers to enter the property of agriculture businesses to speak to employers about supporting a union. The two California businesses challenging the regulation argued on Monday that the regulation violates the Constitution’s Fifth Amendment, which bars the government from taking property without compensation. During 70 minutes of oral argument, the justices struggled with both sides’ arguments, even as some of them seemed inclined to give the businesses a narrow win.

First up on Monday was Joshua Thompson, the lawyer representing Cedar Point, a strawberry grower in northern California, and Fowler Packing Company, a Fresno-based shipper of grapes and citrus fruit. Thompson told the justices that because the regulation gives union organizers the right to enter and stay on the businesses’ property, it is a “taking.” The limitations that the regulation places on the organizers’ ability to occupy the property – allowing them to remain there for up to three hours per day, 120 days per year – are relevant only to determine how much compensation the businesses are owed, and not to whether a taking occurred in the first place, Thompson stressed. The regulation denies the businesses the right to exclude organizers from their property. 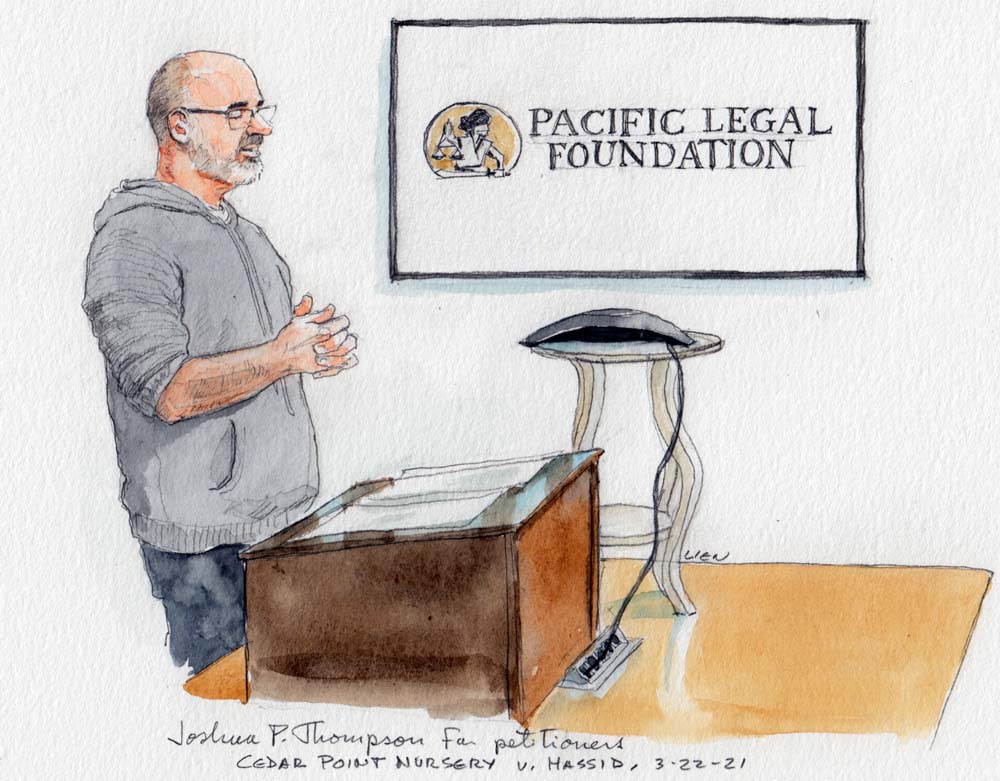 Michael Mongan, the solicitor general of California, defended the regulation. He emphasized that the regulation was narrow: It allows only a limited number of organizers to enter the farm at certain times and for the limited purpose of speaking with employees. The only question before the Supreme Court, Mongan continued, is whether the regulation is treated as a categorical taking, and the answer is no, he argued. The Supreme Court has carved out only two kinds of regulatory actions that are always treated as takings, and this does not fall into either category, he concluded.

Thompson and Mongan faced tough questions from both sides of the virtual bench. Some justices pressed Thompson on whether the California regulation in fact created an “easement” under California law at all. Justice Clarence Thomas was the first to raise this issue, asking Thompson whether there was a finding that the access given by the regulation amounted to an easement.

Thompson responded that there was no such finding, but that it didn’t really matter whether the access given to union organizers would be recognized as an easement under state law. “What matters,” Thompson told Thomas, “is that the right to exclude” people from the property “has been denied in a way that is more than a series of mere trespasses.”

Justice Elena Kagan was unconvinced. She told Thompson that she didn’t think that “the denial of a right to exclude counts as a discrete interest in property.” Kagan conceded that “the right to exclude is one of the sticks in the bundle that a property owner has.” However, she continued, “usually, when people talk about discrete interests in property, it’s like a legal form” – such as an easement.

Mongan picked up on this point sometime later, telling Justice Stephen Breyer that the access allowed by the regulation was “not a classical easement.” “It is a regulatory scheme that applies to a particular type of business conducted on the land, and the access,” Mongan contended, “is not to a particular pathway or parcel” but instead “to the employees, where they are.”

Several justices also pressed Thompson on whether a ruling for the growers would make it harder, as the state and some “friend of the court” briefs contended, for the government to carry out routine health and safety inspections. Chief Justice John Roberts broached this point almost immediately. Thompson sought to reassure the court that such concerns were overblown, telling the justices that because the government had the power under early English and American law to “undertake reasonable searches,” property owners cannot bar the government from entering their property to conduct such searches.

Breyer echoed Roberts’ question, asking Thompson whether the government would have the authority to go on someone’s property to inspect a spaceship. “They had no spaceships” in early English and American history, Breyer observed.

But a real concern was what Justice Amy Coney Barrett described as “line-drawing”: If the government requires landowners to allow access to their property, at what point does that access become a taking? She asked Thompson whether a state regulation that allowed union organizers to enter an employer’s property for one hour a day, one day a year would always be a taking. Thompson responded that it would be.

Mongan faced questions on the other end of the scale. When he agreed that an access right that was in effect 24 hours per day, 365 days a year, would always be a taking, Kagan pushed him to identify a lower number at which the access right would not always be a taking. What about 200 days, she queried? Mongan also sought to reassure the justices that line-drawing problems would be rare “because we don’t have access regulations that are anywhere close to continuous.” Justice Brett Kavanaugh suggested that the court could put aside questions about line-drawing and arrive at what he characterized as a “very simple” resolution to the case that would result in a win for the businesses, even if it was not the sweeping property-rights win that they had hoped for. In 1956, Kavanaugh observed, in NLRB v. Babcock & Wilcox, the Supreme Court ruled that an employer’s right to exclude union organizers from its property must yield when employees would be otherwise unreachable through normal channels. You’re asking us, he told Thompson, “to reinvent the wheel” when the growers would likely win under Babcock.

Justice Sonia Sotomayor also pressed this point. You are saying, she told Thompson, that this case is different from Babcock because the workers don’t live on the grounds of the business, “they’re easily accessible, they speak English more than Spanish.” She concluded, “[D]on’t you win under Babcock?” It wasn’t clear whether there were at least three other justices who agreed, but Kavanaugh and Sotomayor’s questions might provide a simpler way out of a complicated case.

A ruling in the case is expected by summer.