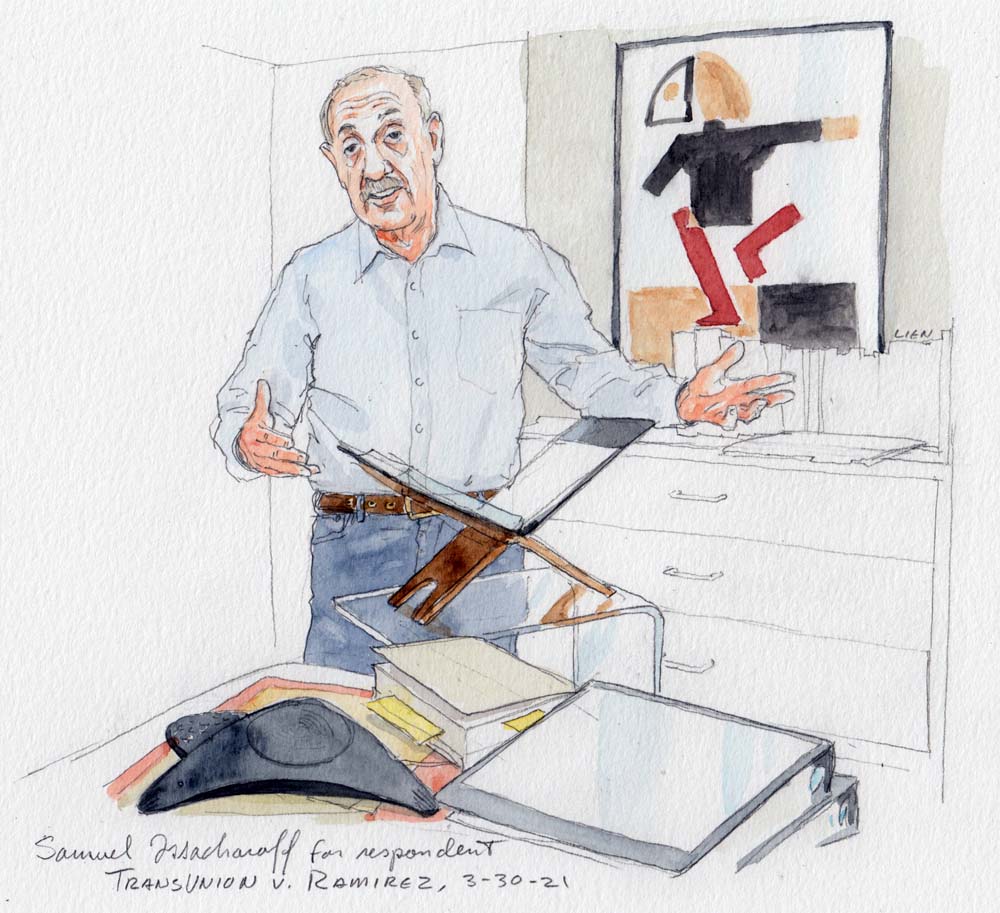 The Supreme Court on Tuesday seemed to favor a middle-ground approach in a dispute over the rules that limit when consumers can bring class-action lawsuits against corporations. Some justices suggested that an 8,000-member class action against TransUnion, one of the country’s three major credit-reporting companies, should be significantly narrowed — but not tossed out entirely.

The case, TransUnion v. Ramirez, was filed by a California man who went to buy a car at a Nissan dealership, only to be wrongly told that his name matched two names on a list of suspected terrorists and criminals with whom U.S. companies are barred from doing business. The man, Sergio Ramirez, then contacted TransUnion, which provided both the credit report to the Nissan dealership and the notification that Ramirez’ name matched names on the list maintained by the Treasury Department’s Office of Foreign Assets Control. TransUnion sent Ramirez two separate mailings – which, he says, did not comply with federal consumer protection laws – again indicating that his name was considered a “potential match” to two in the OFAC database. He sued the company on behalf of more than 8,000 people who were identified as potential matches and received a similar pair of mailings over a six-month period in 2011.

The question in the case is whether the lower courts should never have allowed it to proceed as a class action. Does the case boil down to a matter of “no harm, no foul,” as some justices put it during Tuesday’s oral argument, because there is no evidence that every member of the class suffered the kind of real harm that gives them a legal right to sue, known as standing, even if a federal law was technically violated? After over 90 minutes of debate, it appeared that some justices might be ready to split the difference.

Lawyer Paul Clement argued on Tuesday on behalf of TransUnion, which came to the Supreme Court after the U.S. Court of Appeals for the 9th Circuit upheld a jury award of more than $40 million against TransUnion in the class action. Clement told the justices that the class suffered from two separate problems. First, he contended, not all of them have standing. Members of the class, he observed, will collect thousands of dollars in damages, even if they didn’t know they were harmed at all until they receive the check, simply because TransUnion sent them their credit report and the OFAC alert in two envelopes instead of one. Second, Clement continued, even if everyone in the class did have standing to sue, the unusual circumstances of Ramirez’ case are “entirely atypical and unrepresentative of the average class member.” Therefore, Clement concluded, he cannot satisfy the requirement, imposed by the federal rules governing class actions, that the claims of the person representing the class be typical of the class’s claims.

Clement ran into questions, however, on both of these points. Even some of the court’s more conservative justices seemed to agree with Ramirez that, at least when it came to the roughly 1,800 class members whose personal information was given to someone else, it was not a matter of “no harm, no foul.” Justice Samuel Alito raised this point early on, asking Clement whether someone would suffer a psychological injury if a third party saw that an individual had been flagged as a potential OFAC match. Alito continued with this line of questioning, broaching the issue of the potential remedy if the Supreme Court were to agree that the district court should have certified a smaller class instead.

Justice Neil Gorsuch weighed in a few minutes later, returning to the issue of the roughly 1,800 people whose information was disclosed. Under early English and American defamation law, Gorsuch observed, publication was presumed to give rise to an injury. Why wouldn’t that be true in this case, Gorsuch queried, and be enough to give those class members standing?

Justice Brett Kavanaugh also seemed to suggest that he was inclined to give TransUnion only a partial victory. If we agree with you on the roughly 6,000 class members whose information was not disclosed, but not on the 1,800 whose information was published, he asked Clement, what instructions should the Supreme Court give the lower courts when the case returns there?

Two of the court’s liberal justices were skeptical of Clement’s assertions on a different point – the idea that Ramirez could not serve as the named plaintiff because he was not typical of the average class member. Justice Stephen Breyer suggested that it was too late for TransUnion to raise this question now. Shouldn’t TransUnion’s lawyers have objected at trial, Breyer asked, to efforts to introduce information about the special circumstances in which Ramirez learned about the inaccurate OFAC alert – at a car dealership, in front of his wife and father-in-law – on the ground that it had nothing to do with the “typical” injury sustained by members of the class?

Justice Sonia Sotomayor also pressed this issue, telling Clement that the federal rule governing class actions requires “typical claims and defenses.” Ramirez has the same claims as everyone else, she said: They were all designated as OFAC matches because of the flaws in TransUnion’s procedures, and they all received the same two mailings from TransUnion. TransUnion’s real objection, Sotomayor continued, is to dissimilar harms and damages, but that is not covered by the rule. “I just see this as a trial error,” Sotomayor concluded, “not as an error in certifying the class.”

Arguing on behalf of Ramirez, New York University law professor Samuel Issacharoff countered that all members of the class suffered the same “concrete harm” that they had shown at trial. “Being labeled a potential OFAC match is not,” Issacharoff stressed, a trivial mistake like “a misreported zip code.” “It is the scarlet letter of our time” and “banishes individuals from the marketplace.”

But despite several justices’ apparent sympathy for the class members whose personal information was actually disclosed, some of the same justices seemed dubious that other members of the class had suffered real harm when their information had not been disclosed. Alito asked Issacharoff about a hypothetical in which TransUnion had a computer program to flag anyone whose first and last names match a name on the OFAC list. Would anyone flagged by the program be injured, Alito queried, even if there was no inquiry about that person? Alito continued this line of thinking, asking Issacharoff for an analogy in which a lawsuit could be brought for having been subjected to a risk in the past even though the plaintiff had not been aware of the risk at the time.

Gorsuch was also skeptical, pointing to the Supreme Court’s cases governing conspiracies. You are relying on the idea that TransUnion published information about the majority of the class members within the company, without disclosing it to anyone else, he told Issacharoff. But under our case law “that normally suggests what happens within a corporation doesn’t count for purposes of conspiracy,” Gorsuch continued, “wouldn’t it be odd to speak of publication within a company” as an injury?

Kavanaugh quoted his former colleague, Judge David Tatel of the U.S. Court of Appeals for the District of Columbia Circuit, to express his doubt that most class members had standing to seek damages when their information had not yet been published. “If inaccurate information falls into a database,” Kavanaugh said, “does it make a sound?” Tatel’s answer, Kavanaugh emphasized, was “no.” Kavanaugh appeared to agree with him; we’ll know more by summer.