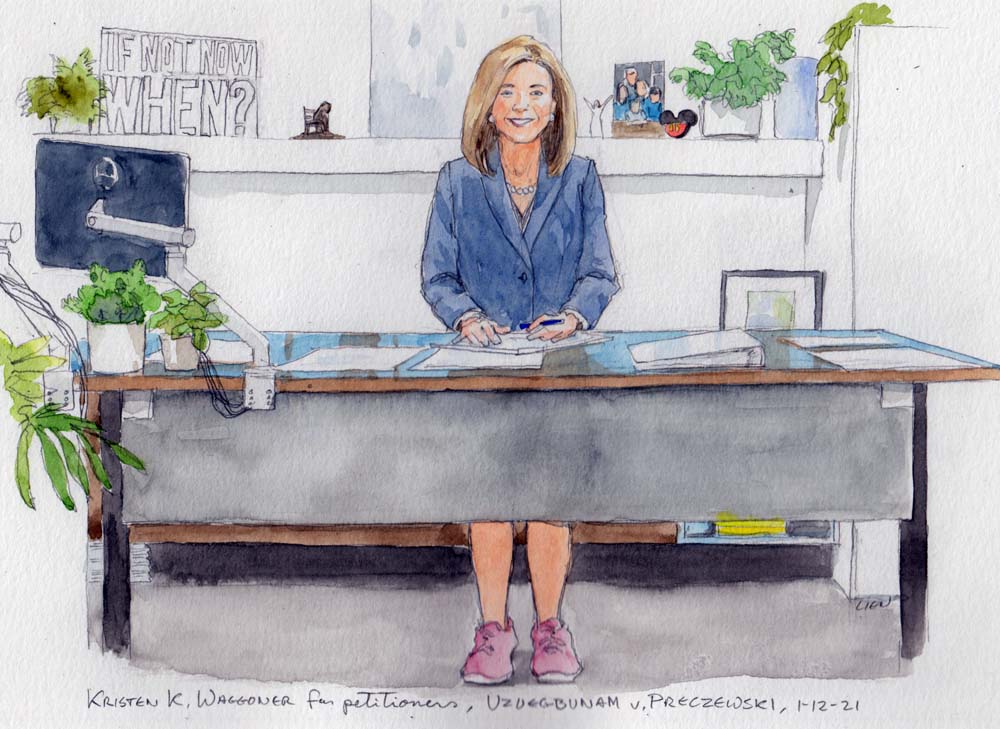 The Supreme Court heard oral argument on Tuesday in the case of a Georgia student who was stopped from handing out religious literature and speaking about his faith on the campus of his public college. The student, Chike Uzuegbunam, argued that the college’s policies violated the First Amendment, but shortly after the lawsuit was filed the college changed its policies to allow students to generally speak anywhere on campus without a permit. The question before the court on Tuesday in Uzuegbunam v. Preczewski was whether the lawsuit can still go forward given that Uzuegbunam is seeking only symbolic damages, or whether the case is instead moot – that is, no longer a live controversy. During just over 90 minutes of debate, the justices had tough questions for both sides, making it difficult to predict how they might ultimately rule. 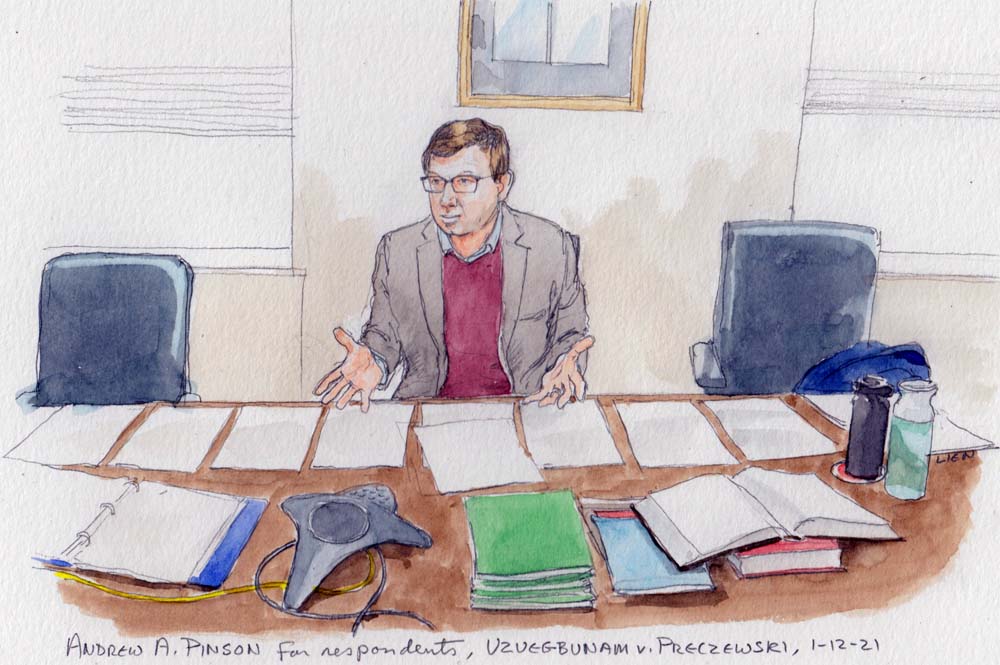 The lawsuit began after Uzuegbunam, who is an evangelical Christian, was handing out religious literature outside the campus library at Georgia Gwinnett College, a public college in a suburb of Atlanta. A campus police officer told Uzuegbunam that he was allowed to distribute literature only if he had reserved one of two designated areas in advance. But when Uzuegbunam later booked one of those zones to speak and share literature, another police officer told them that he was violating the college’s ban on “disorderly conduct” because his speech was disturbing others.

A federal district court threw out Uzuegbunam’s lawsuit after the college changed its policy and Uzuegbunam (as well as Joseph Bradford, another student who had joined the lawsuit) graduated. Although Uzuegbunam had asked for nominal damages – that is, symbolic damages, such as a dollar – in addition to his request for an order barring the college from enforcing its now-rescinded policies, the court reasoned that the nominal damages were not enough to allow Uzuegbunam’s case to continue. After the U.S. Court of Appeals for the 11th Circuit upheld that decision, Uzuegbunam went to the Supreme Court, which agreed last summer to weigh in.

Representing the students, lawyer Kristen Waggoner told the justices that when college officials stopped Uzuegbunam and Bradford from sharing their faith, they caused “concrete injuries” for which nominal damages can provide a remedy. Those damages, regardless of the label, would put money in the students’ pockets, Waggoner said, and they therefore satisfy the Constitution’s requirement that federal courts are limited to resolving active disputes with real interests at stake.

Despite Waggoner’s assertion, the justices spent much of the argument trying to determine for themselves what role nominal damages actually play in a lawsuit. Chief Justice John Roberts was the first to raise this issue, telling Waggoner that as a practical matter the only relief she and her clients were seeking was a “declaration that you are right,” with the nominal damages – a dollar — standing in as a symbol of that vindication.

Waggoner pushed back, stressing that nominal damages represented not only a declaration that the defendant’s conduct was wrong but also an award for the plaintiff’s past injury. But Justice Samuel Alito echoed Roberts’ question a few minutes later, asking her to explain why nominal damages vindicate an earlier violation of a constitutional right. If nominal damages provide merely a statement that there was a violation of rights, Alito observed, that sounds like an advisory opinion – which the Constitution does not allow courts to provide.

Justice Neil Gorsuch suggested to Waggoner that most lawsuits would still be able to go forward even if a request for nominal damages, standing alone, was not enough to keep a case alive. That’s because everyone agrees that even small amounts of compensatory damages – which provide remuneration for a measurable loss – are enough to prevent a case from becoming moot. When Waggoner responded that victims of government misconduct might not be able to show any damages other than nominal damages, Gorsuch posited that such plaintiffs might be able to recover their bus fare, or compensation for the time that it took them to walk to the site where they were injured. We have “very imaginative lawyers with imaginative damages theories,” Gorsuch quipped.

Justice Elena Kagan had similar questions for Hashim Mooppan, the counselor to the U.S. solicitor general who argued on behalf of the federal government in support of the students. Kagan acknowledged that the students and the federal government had “a lot of history on your side,” but she seemed to regard it as not particularly relevant to today’s world. We now monetize claims that are difficult to quantify all the time, Kagan stressed, in the form of claims for emotional distress, for example. But what the students really want in this case, Kagan continued, is vindication – which is not a case or controversy for purposes of the Constitution.

Andrew Pinson, the solicitor general of Georgia, also faced tough questions about the significance of nominal damages and, in particular, the difference between nominal damages and an award of compensatory damages for small amounts of money. Roberts asked him about a scenario in which Congress passed a law and provided for damages of one dollar for plaintiffs who prevail in private lawsuits to enforce the law.

Pinson responded that for an award of just one dollar, the question of whether the lawsuit could go forward would hinge on the injury being redressed. If all Congress was really doing was providing a vehicle for courts to issue advisory opinions, he said, “I think the court would have to look carefully at that.” But, in response to a question from Roberts, he acknowledged that an award for the cost of the gas that it took to drive to the campus would not be too trivial because compensatory damages, regardless of the amount, “are recognized as relief of a past injury.”

Alito pressed Pinson, asking whether an award of $10 in statutory damages would be large enough for the lawsuit to go forward. Pinson answered that if the award was compensation for “difficult-to-prove injuries,” then it would provide the kind of relief that would allow the lawsuit to continue.

Kagan brought up the case of music superstar Taylor Swift, who was the plaintiff in what Kagan described as “the most famous nominal-damages case I know of in recent time.” Swift filed a sexual assault case against a radio host seeking only a dollar, Kagan observed, because she said she didn’t want his money, just a dollar to represent what she and others had experienced. There was “unquestionable” physical harm, Kagan stressed, but Swift only asked “for this one dollar to say that she had been harmed.”

Pinson resisted the characterization of Swift’s case as one seeking nominal damages, arguing that Swift had “alleged clear compensable injuries.” If so, Kagan countered, “why isn’t that the same as this?”

Suggesting that what Swift really wanted was vindication, Justice Amy Coney Barrett queried whether courts should look at the motivation for a lawsuit, so that nominal damages could “actually be compensatory for one person but not for another?” Barrett noted that under a variety of consumer-protection statutes, like the Telephone Consumer Protection Act and the Fair Debt Collection Practices Act, statutory damages are relatively low, but courts may order defendants who are found liable to pay the plaintiff’s attorney’s fees. Those statutes deter wrongdoers in the regulated industries and allow consumers to vindicate their rights. If Congress reduced the available damages for violations of those statutes to a dollar, would it call into question whether lawsuits brought under those laws are constitutional? When Pinson appeared to agree that those lawsuits would still be constitutional, Barrett shot back, “So you concede the damages for receiving a couple annoying texts but not for having your First Amendment rights violated?”

Justice Brett Kavanaugh (as well as Justice Sonia Sotomayor) focused on the federal government’s suggestion that, when a plaintiff is only seeking nominal damages for conduct that occurred in the past, the defendant can end the litigation by accepting the entry of an award of nominal damages, without a ruling on the merits of the claims against it. Such a move might minimize the practical effect of a Supreme Court ruling in favor of the students, because their lawsuits might not move forward anyway. What is really at stake in these sorts of cases, Kavanaugh proposed, is not the award of nominal damages but concern about an award of attorney’s fees. If a plaintiff filed a lawsuit and the defendant changed the policy being challenged, Kavanaugh noted, the plaintiff wouldn’t be entitled to attorney’s fees if the lawsuit only sought injunctive relief – that is, an order barring the defendant from acting in the future.

Pinson contended that the situation might be more complicated than the defendant simply paying a dollar or so of nominal damages in order to end a lawsuit. A default judgment, he argued, is treated as a conclusive resolution of the case. Moreover, he added, in a case like this one, involving public officials who have been sued in their individual capacities, it might not be fair to require them to accept liability to avoid drawn-out litigation.

In one of her questions for Mooppan, Barrett reminded her colleagues that the potential implications of their ruling extend beyond the First Amendment. In last term’s challenge to New York City’s ban on the transport of guns outside the city, the justices ruled that the case was moot because the city had changed its policy. If the challengers had sought nominal damages, she asked, would the decision have come out the other way?

Yes, Mooppan responded, because it would have been a live claim. When the justices sent the New York case back to the lower court last year, Alito – in a dissent joined in part by Thomas and Gorsuch – wrote that “a claim for nominal damages precludes mootness.” After Tuesday’s argument, it wasn’t entirely clear whether there were at least five votes for that proposition; we’ll know the answer by summer.