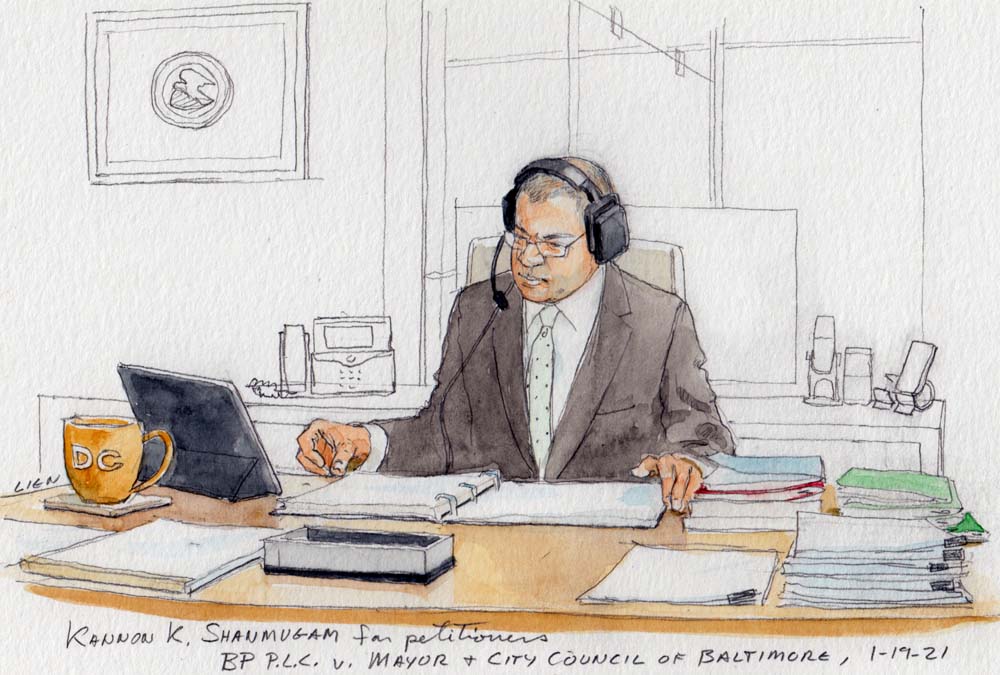 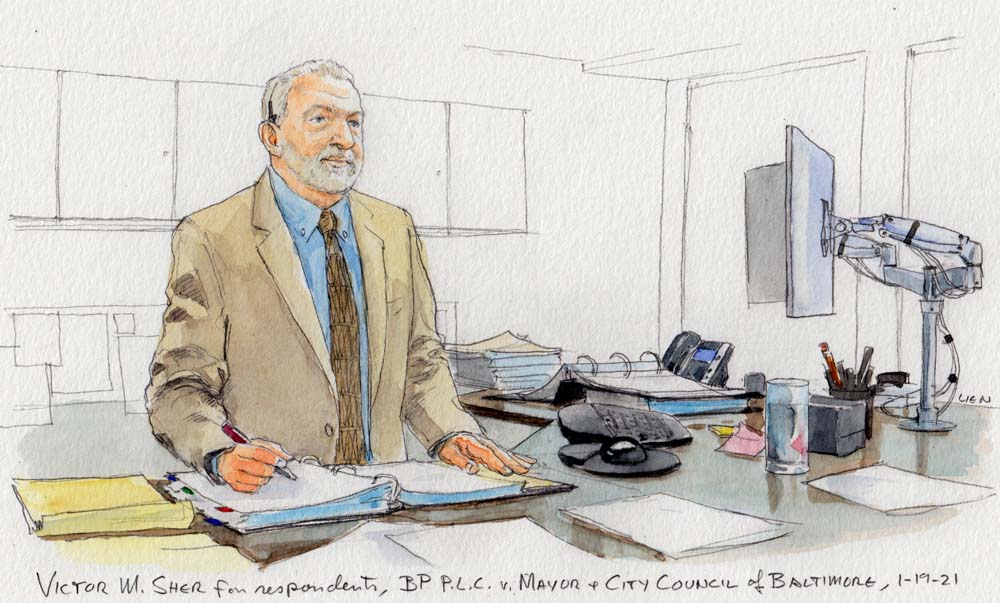 In a speech at Harvard Law School in 2015, Justice Elena Kagan told the audience that “we’re all textualists now” – that is, that any effort to interpret a statute begins (and often ends) with the language of the statute. That principle may ultimately prove dispositive in BP v. Mayor and City Council of Baltimore, in which the justices heard oral argument on Tuesday regarding a procedural aspect of a major climate-change lawsuit. Although the justices expressed concerns about the implications of a ruling for the oil and gas companies who are defendants in the lawsuit, several of them also seemed persuaded by the companies’ argument that their interpretation of the federal law at the heart of the dispute was more consistent with the actual text of the law.

The case began in 2018, when the city of Baltimore sued a group of oil and gas companies, including BP, Chevron and Exxon Mobil, seeking to hold the companies responsible for their role in climate change. Chevron transferred – the technical term is “removed” – the case to federal district court in Maryland, a move allowed by federal law. One of the grounds on which Chevron relied to remove the case was a law known as the “federal officer removal statute,” which allows the removal of lawsuits filed in state courts against federal officers or anyone acting as a federal officer: Chevron contended that the city was trying to hold the oil companies liable for actions that they took at the direction of federal officials, such as the production of fossil fuels offshore under leases with the federal government.

After the district court sent the case back to state court, the companies appealed to the U.S. Court of Appeals for the 4th Circuit. Under federal law, most orders remanding a case to state court cannot be appealed, but there are two narrow exceptions, allowing appeals in cases in which removal was based on either the federal-officer removal stature or a different statute that allows for the removal of civil-rights cases. The court of appeals ruled that removal under the federal-officer removal statute was not proper, and it rejected the companies’ argument that it could review the rest of the district court’s order sending the case back to state court.

Shanmugam fielded several questions from justices who were concerned that defendants could use the exceptions for federal-officer and civil-rights removals as a loophole to ensure that they could have the court of appeals review the entire order sending the case back to state court, even if the grounds for federal-officer or civil-rights removals were frivolous. Chief Justice John Roberts raised this possibility first, asking Shanmugam why “everyone who wants to keep their case in federal court” wouldn’t “put in as many grounds for removal as they can,” and “all they have to do is tack on one of these federal officer or federal civil rights grounds? Is that right?”

Shanmugam assured Roberts that courts could sanction a defendant that raised a frivolous ground for removal. Moreover, he added, there was no evidence that defendants actually tried to use the exceptions to obtain review of the entire remand order.

Justice Stephen Breyer appeared unconvinced. If you are right, he told Shanmugam, a defendant will rely on the federal-officer removal statute or a civil-rights statute as a ground to remove the case to federal court. Because there’s a “big difference” between a ground being frivolous and meritorious, Breyer suggested, defendants will add one of those grounds. Assuming that the federal court doesn’t find that it’s frivolous, a defendant “will appeal on everything,” which will result in additional delay – directly contrary to the purpose of the statute, which was intended to “cut down on the time and delay caused by appeal.”

Justice Clarence Thomas also confessed skepticism. He told Brinton Lucas, the assistant to the U.S. solicitor general who argued on behalf of the United States in support of the companies, that although his reading of Section 1447(d) may or may not be correct, “I can’t avoid the odd sense that it seems as as though we are smuggling into appellate review … other issues that are not necessarily the issues that are front and center,” like federal-officer removal.

Lucas countered that such a scenario “really isn’t that unusual.” In other contexts, he observed, the grounds that trigger appellate review don’t “necessarily define the scope of that review.” And in any event, Lucas later added, the theoretical possibility of undesirable consequences is no reason to “carve up” remand orders.

Some justices also suggested that the companies’ position was undermined by Congress’ 2011 decision to add the federal-officer removal statute as an exception to the general bar on appellate review of remand orders. Congress made that change in the face of repeated rulings by the courts of appeals limiting appellate review of remand orders to the ground for removal – which, Justice Sonia Sotomayor posited, suggested that Congress understood that the scope of appellate review would not include other grounds for removal and had “ratified” the lower courts’ rulings.

Justice Brett Kavanaugh similarly identified the “ratification” doctrine as a problem for the companies. What do we say to that, he asked at one point? The law was settled, and “no one had gone the other way.” But Kavanaugh later acknowledged that the doctrine was, in his view, sometimes “overused.”

Both Shanmugam and Lucas stressed that the text of Section 1447(d) was on the companies’ side. There is no way, Shanmugam argued, to interpret the provision allowing appellate review of an “order remanding a case” to permit review of only a “portion of an order.”

Sher urged the court to look at the sentence as a whole, including the first clause, which imposes a general ban on appellate review of remand orders. Congress’ use of the words “order” and “reviewable” does not mean that the court of appeals has to address all of the issues raised in an order. Courts have “frequently disentangled” issues, Sher said.

Justice Neil Gorsuch also focused on the text of Section 1447(d). Everyone agrees, Gorsuch said, that the first reference in Section 1447(d) to “an order remanding a case” – in the general bar on appellate review of remand orders – refers to the whole order. And the Supreme Court usually interprets a term the same way throughout a statute, which would suggest that the second reference to “an order,” as part of the exceptions to the general bar, also refers to the entire order.

Kavanaugh also posited that the “text in isolation” is a problem for the city, and this time he appeared skeptical about the weight that the court should give the “ratification” doctrine. “It looks like it’s often used,” he observed, “like icing on a cake already frosted.” “I just wonder,” he continued, “how much work it can do here” when it isn’t clear “that Congress actually focused on this and intended in any way to ratify the interpretation.

Justice Amy Coney Barrett pressed Sher on his argument that a case hasn’t been removed “pursuant to” the federal-officer or civil-rights removal statute “unless it has been correctly removed” under those grounds. “Has any court of appeals,” she asked, “ever adopted that argument?”

After over an hour of argument, the justices appeared divided, and it was hard to predict exactly how the case is likely to come out, especially because Justice Samuel Alito is recused from the case. A decision is expected by summer; however the court decides the case, its ruling will have an impact not only in this case but also in 19 other similar cases around the country in which local governments are seeking to force the fossil fuel industry to pay compensation for coastal flooding, adverse health outcomes and other effects of climate change.