Empirical SCOTUS: The importance of state court cases before the Supreme Court 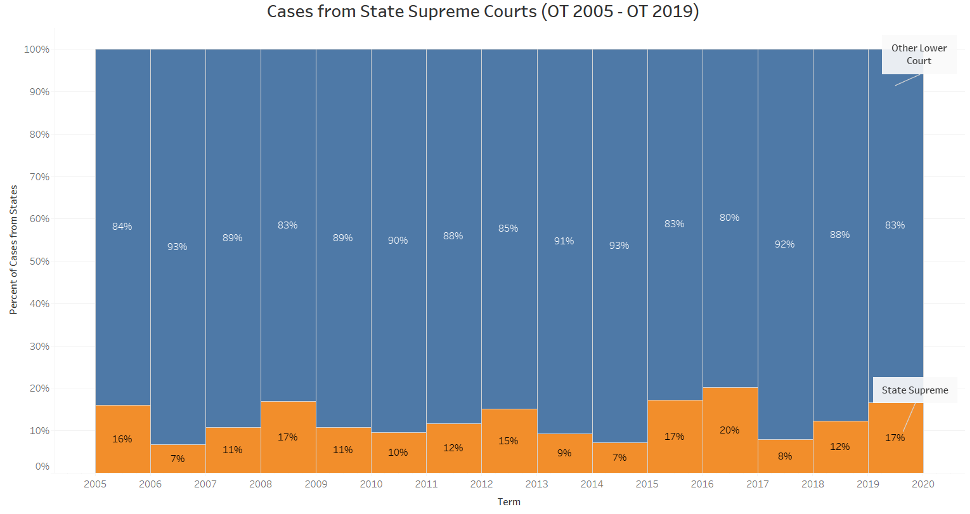 Supreme Court review is often thought of as mainly monitoring the federal courts and circuit splits. The reasons for this are obvious. Article III of the Constitution gives the Supreme Court broad authority to review questions of federal law, but the court’s power to supervise state courts has been limited since the Judiciary Act of 1789, which made clear that the Supreme Court cannot review state court judgments on questions of purely state law. Rule 10 of the Supreme Court Rules, which sets forth the types of cert petitions the court will grant, speaks first about federal courts, particularly cases raising a circuit split or federal question.

Surprising to some, the bulk of the cases the court heard during the 2019-20 term came not from any federal circuit. More cases came to the Supreme Court cumulatively from state supreme courts — 11 cases or around 17% of the court’s merits docket — than from any single federal court. Of the federal courts, the U.S. Court of Appeals for the 9th Circuit had the most cases reviewed by the Supreme Court with 10, which equated to 14% of the court’s docket.

The cases from state courts were primarily criminal in nature, with seven criminal cases and just four civil ones. While this article focuses on the last few terms of Supreme Court review of state court decisions, Empirical SCOTUS took a longitudinal look at the topic in a previous post.

So far, the court has granted argument in two sets of cases reviewing state court decisions for the 2020-21 term. The first argument, in Jones v. Mississippi, will look at Eighth Amendment limits on life sentences for juveniles. The second argument, in Ford Motor Company v. Montana Eighth Judicial District Court and a consolidated case, will focus on issues of civil procedure and jurisdiction relating to lawsuits against Ford Motor alleging problems with its cars.

Since the beginning of the Roberts court, the percentage of SCOTUS cases from state courts has, for the most part, hovered between 10 and 20%.

During the 2019-20 term, almost 73% of the court’s cases reviewing state court decisions were criminal rather than civil. Over the last five terms, though, there has been considerable fluctuation in this balance between criminal and civil cases coming from state courts. 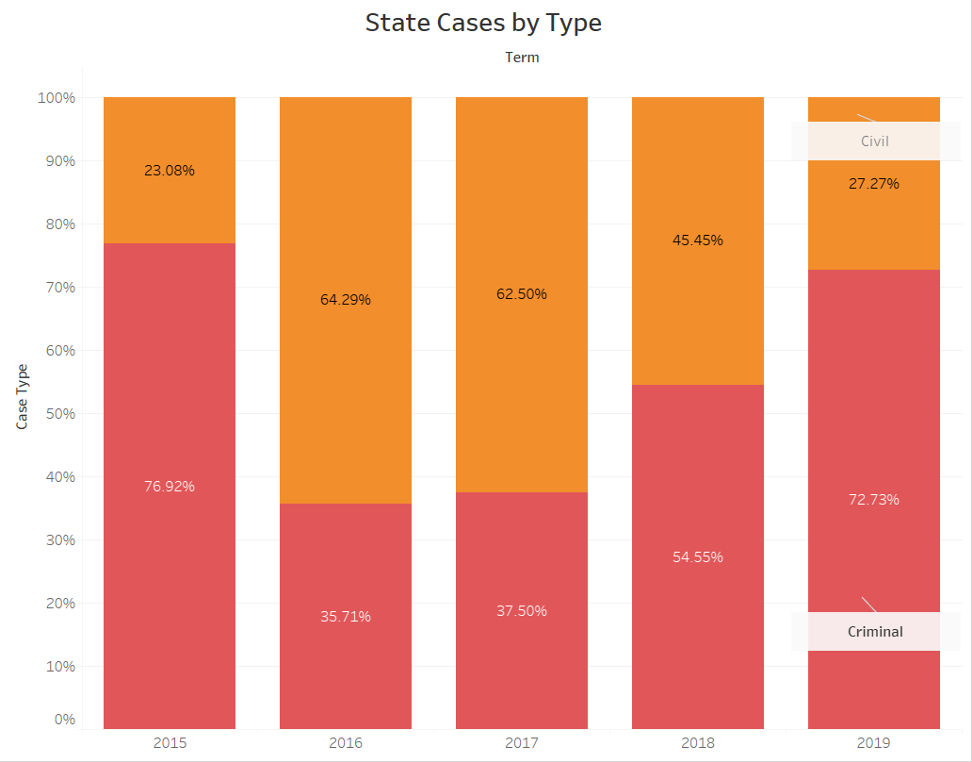 Amici play a large role in cases coming from state courts. These amici, while sometimes overlapping those who frequently file in cases from federal courts, also include state-based organizations that handle more local policy matters. These amici assert different interests than groups with a nationwide focus and offer the court a glimpse of policy forecasts based on different sectors of the population. For this article, state and local-level amici were coded in each case from a state court over the past five terms. 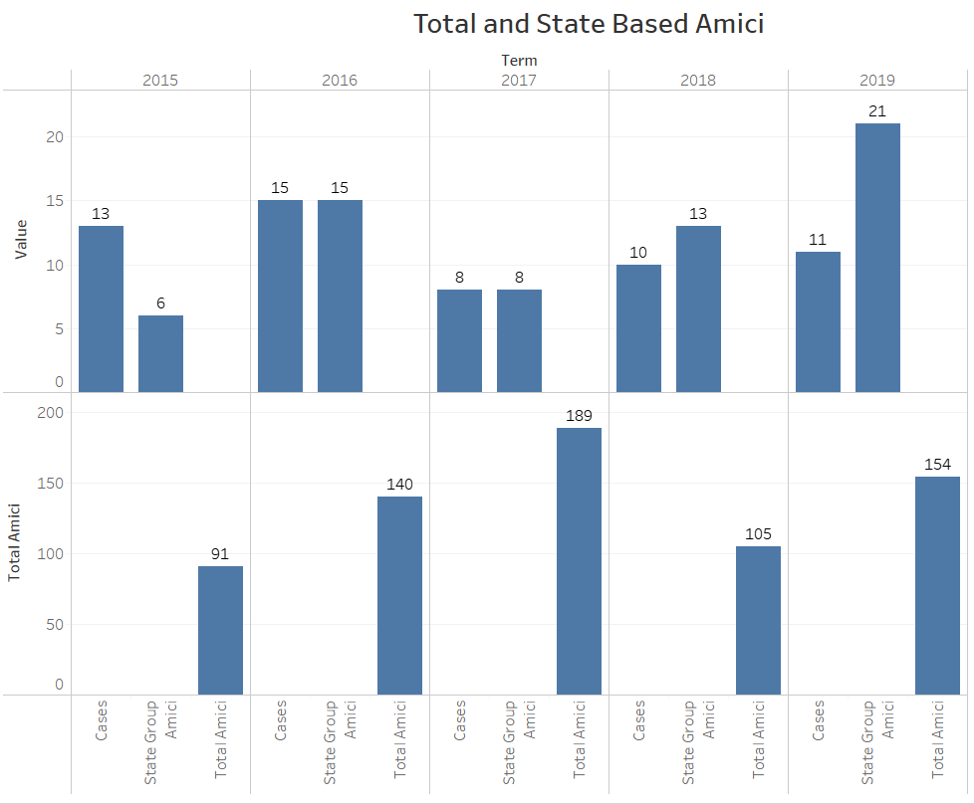 This past term saw the most filings from state-based amicus groups. The 2017-18 term saw the most total amicus filings in these cases, more than twice as many as the 2015-16 term. The bulk of the 2017 filings came in two civil cases arising from state courts: South Dakota v. Wayfair Inc. with 46 amicus briefs, and Masterpiece Cakeshop, Ltd. v. Colorado Civil Rights Commission with 99 amicus briefs.

The state cases from these five terms with the most amicus filings, including the two cases mentioned above, are covered in the following graph. 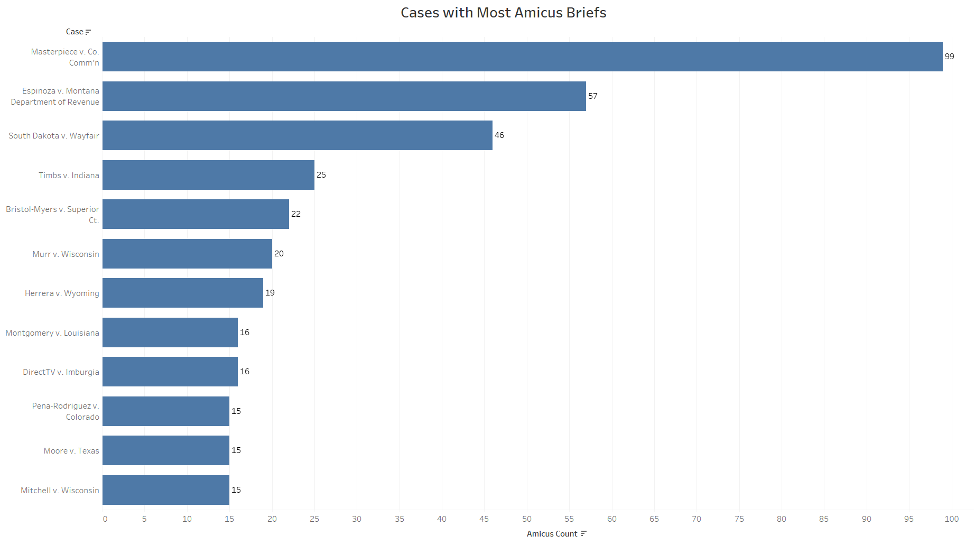 The only case from the most recent term that made the list for most amicus filings was the religious-school funding case Espinoza v. Montana Department of Revenue.

To focus on the most active amici during this period, the following graph based on entries from the Supreme Court dockets shows groups that filed amicus briefs in three or more state cases. 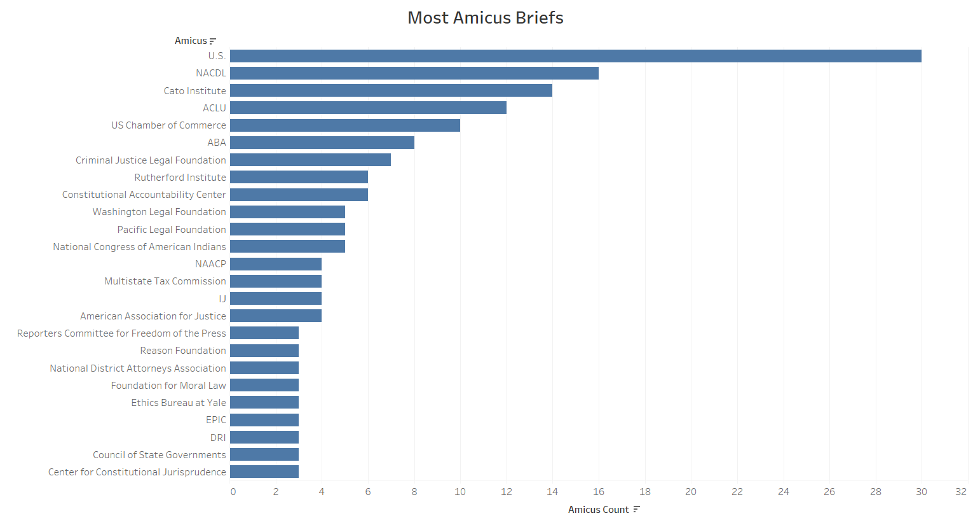 The prominence of criminal law is evident from the high placement of the National Association of Criminal Defense Lawyers, which filed amicus briefs in more state cases during this period than any group other than the United States. National groups that file amicus briefs in both federal and state Supreme Court cases also led the filings here. The Cato Institute, the American Civil Liberties Union and the American Bar Association are regular filers in cases from both federal and state courts. The U.S. Chamber of Commerce participates in many business-related cases before the court. The Criminal Justice Legal Foundation is another example of a large organization focused on criminal law that participates in many of these cases.

Certain clusters were removed from this graph but are relevant amici in this set of cases. These include 63 briefs filed in this case set by academics, 43 by states, 32 by individuals, 25 by politicians/judges/lawyers and six by cities and local entities.

When viewing the following graph from a previous post looking at the most successful amici from 2000-2016, many of the same groups are evident.

The overlap between groups in the two graphs highlights the importance of these state court cases to the most prominent amici before the court. Groups that are on the state court list but not on this list of winningest amici are those like the National Congress of American Indians, Multistate Tax Commission and Reason Foundation, which might have distinct interests in the state subset of cases.

Because this post looks to nuances in state court cases that might be different from other litigation before the Supreme Court, a final measure of interest is attorneys with the most oral arguments in this set of cases. In the graph below, these attorneys are divided into private attorneys from firms or groups, attorneys for state governments and attorneys for the federal government as an amicus. 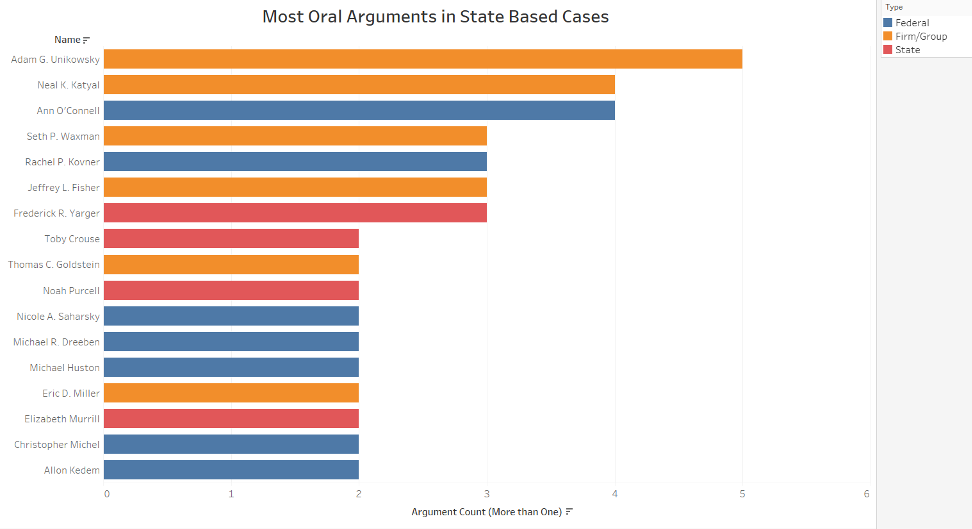 With five oral arguments, Jenner & Block’s Adam Unikowsky argued more of these cases than any other attorney. Hogan Lovells’ Neal Katyal argued the second most with four, along with federal government attorney Ann O’Connell. Other private attorneys on this list include some of the most prolific members of the Supreme Court bar: Seth Waxman, Jeff Fisher, Tom Goldstein and current 9th Circuit Judge Eric Miller. State government attorneys on this list include former Colorado Solicitor General Frederick Yarger, Kansas Solicitor General Toby Crouse (who was nominated in May to serve on the U.S. District Court for the District of Kansas), Washington Solicitor General Noah Purcell and Louisiana Solicitor General Elizabeth Murrill.

While the world of Supreme Court litigation coming from state courts holds clear differences from Supreme Court cases coming from lower federal courts, the similarities are often more prominent than the differences. Although the types of cases and amicus filers subtly differ between the two group, many of the amicus filers in both are the same big-name interest groups. The recent prominence of state criminal litigation, compared to the prominence of federal civil suits, might be noteworthy as well. At the end of the day, the law firm litigators that argue many of these state cases are the same familiar faces who argue the bulk of other cases before the court. The bottom line is that Supreme Court cases from state courts are just as important as those from federal courts, and more focus should be placed on comparing and contrasting cases from these two spheres.