Book review: In two new scholarly works, a shared critique of the court’s approach to church and state

Steven Green is the Fred H. Paulus professor of law and director of the Center for Religion, Law & Democracy at Willamette University College of Law. 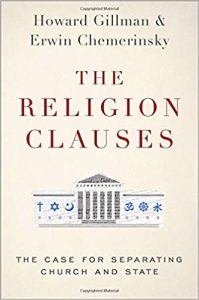 It is rare for two books on the same subject – and written by some of the nation’s leading scholars – to be published not only in the same year but practically in the same month. But that’s what has happened with two new works on the First Amendment’s religion clauses. (Possibly, there is less of a coincidence than meets the eye in that they share the same publisher: Oxford University Press.) Howard Gillman, who co-wrote The Religion Clauses: The Case for Separating Church and State (which is due out Sept. 1), is the chancellor of the University of California, Irvine, a political scientist by training and the author of several well-received books about the Constitution and the Supreme Court. His co-author, Erwin Chemerinsky, is the dean of U.C. Berkeley law school and is a leading expert on constitutional law through his scholarship, advocacy and commentary. And Jack Rakove, who wrote the recently released Beyond Belief, Beyond Conscience: The Radical Significance of the Free Exercise of Religion, is a Pulitzer Prize-winning scholar of American intellectual history. When such outstanding scholars write new books about the history and meaning of the religion clauses, they deserve our attention. 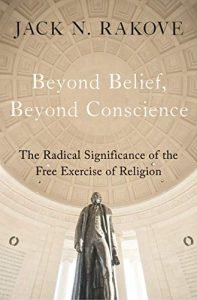 The Religion Clauses and Beyond Belief, Beyond Conscience are very different books. The Religion Clauses is chiefly a critique of the current Supreme Court’s approach to adjudicating church-state conflicts, focusing primarily on case analysis and doctrine. Beyond Belief, Beyond Conscience is chiefly a historical analysis of the rise of the American concept of religious freedom. At the same time, the books share some common elements. The first is their timeliness, with both books filled with a sense of urgency. They both, in different ways, caution that the court’s interpretations of the religion clauses over the last decade or so have gone astray, historically and jurisprudentially. A second shared element is their critique – so well deserved – of the justices’ (mis)use of history in adjudicating church-state conflicts. And finally, both books conclude with pleas for rediscovering the positive values inherent in church-state separation.

Of the two books, The Religion Clauses assumes a more argumentative style, possibly reflecting Dean Chemerinsky’s legal expertise. At the risk of understating its comprehensive coverage, The Religion Clauses is in a sense a legal primer on the religion clauses. That is intended to be a compliment; one could read The Religion Clauses with little prior understanding about the concerns that motivated members of the founding generation, the modern development of church-state jurisprudence, or the competing perspectives that drive the debate today, and then afterwards, have a solid appreciation for those various issues.

Both the legally trained and lay reader should find The Religion Clauses approachable. It is well organized, with a lucid writing style and a careful and precise argumentation. It begins by discussing the recent transformation in church-state jurisprudence through decisions like Burwell v. Hobby Lobby Stores, Town of Greece v. Galloway, Trinity Lutheran Church v. Comer, Masterpiece Cakeshop v. Colorado Civil Rights Commission and American Legion v. American Humanist Association, an approach that has subordinated church-state separation to free exercise values. The book assigns responsibility for the jurisprudential shift to the conservative make-up of the court and to the growing rebuke of church-state separation by conservative jurists, politicians and members of the academy.

It then segues to a chapter on the historical context behind the adoption of the religion clauses. While the authors do not argue that a consensus existed among the Founders over the principle of church-state separationism, they do demonstrate the strength of the disestablishing impulse, the dynamic evolution in attitudes toward church-state relations, and the agreement on the idea of a secular identity for the new government. The authors argue strongly for a non-originalist approach to history, one that considers only the broad principles that have vitality and relevance today.

The next two chapters consider, in turn, the establishment clause and the free exercise clause. Here the book becomes more doctrinal, examining the leading court decisions for each clause through a balanced analysis, with each chapter then concluding with the authors’ perspective. The former chapter ends with a plea for a separationist approach, arguing that it promotes pluralism, inclusion and the independence of religion, as well as the integrity of secular government. A “separationist approach is consistent with advancing [a] more inclusive vision of religious liberty in our constitutional system,” Gillman and Chemerinsky write. The latter chapter concludes by advocating against granting exemptions from neutral laws and regulations for religiously motivated actors. Here, the book criticizes the Hobby Lobby line of decisions that have expanded free exercise protections at the expense of salutary policies intended to provide greater access and equality. The final chapter offers a final plea for efficacy of church-state separation, insisting that separationism does not promote hostility toward religion but, again, fosters equality and inclusion.

One critique of the book — or, at least, an observation about what is otherwise a balanced and convincing presentation — is in how it addresses the issue of the distinctiveness of religion. In the establishment clause chapter, the authors highlight religion’s distinctive quality in arguing against government financial aid or permitting government’s use of religious symbols and rhetoric. In the free exercise chapter, however, the authors downplay religion’s distinctiveness in their argument against providing religious exemptions to neutral regulations, insisting that exemptions “give[] undue favoritism to people with religious convictions over people with similarly strong secular convictions.” That tension can be reconciled, in part, by distinguishing between exemptions/accommodations that are relatively cost-free and chiefly enhance pluralism, and those that transfer costs to third parties and chiefly reinforce positions of privilege, a distinction that the authors acknowledge.

Beyond Belief, Beyond Conscience is a different book, structurally and thematically. Whereas The Religion Clauses reserves only one chapter to discussing the relevant history, with the remainder focusing on case analysis and argument, Beyond Belief, Beyond Conscience has the opposite organization. It is chiefly a history of the development of the idea of religious liberty, with the final chapter being reserved for comparing that history against the modern court’s application of that principle. The book’s subtitle – The Radical Significance of the Free Exercise of Religion – is somewhat misleading. While the primary focus of the study is to trace the evolution of conscience rights from a position of persecution, to toleration, and then to equality, Professor Rakove does not limit his coverage solely to free exercise matters but spends considerable space analyzing the disestablishment impulse as well. He sees the two impulses as interrelated and mutually reinforcing: “Disestablishment promoted free exercise, and free exercise made disestablishment superfluous.”

For a mid-sized book (186 pages), Beyond Belief, Beyond Conscience is quite comprehensive in its coverage. For much of the book, Rakove uses James Madison and Thomas Jefferson as our guides – an approach that will likely draw the ire of conservatives who argue that the attention (and credit) given to these two Founders is overdone. But Rakove demonstrates that that attention and credit is well deserved. The book traces the gradual acceptance of the ideas of religious toleration and free religious conscience, crediting both Enlightenment and pietistic traditions. Those impulses, combined with the ever-expanding religious pluralism of colonial British America, made religious equality necessary, although Rakove shows that it wasn’t necessarily inevitable. Madison and Jefferson then built on that foundation, with both men championing the idea of free exercise as the most visible manifestation of freedom of conscience and as a means – though not the only means – of countering the corruptions and inequities of religious establishments. Yet Rakove shows that Madison and Jefferson did not advocate for an unrestrained free exercise right or abandon their suspicions of religious authority and religious factionalism. For Madison, religious excesses were to be controlled through the marketplace of competition.

After a chapter on the 19th century — when Madisonian-Jeffersonian notions of religious equality and government disengagement were subordinated to a de facto Protestant “moral establishment” — Beyond Belief, Beyond Conscience transitions to a final chapter on modern free exercise development and current controversies. The first half of that chapter is relatively conventional; the second half is where Rakove uses his authority as a leading historian to critique the more recent shifts in free exercise jurisprudence. Like Gillman and Chemerinsky, Rakove questions the historical basis and normative efficacy of an emboldened, exemption-driven application of free exercise: “[T]he [modern] advocates of accommodation and exemption are not concerned with the issues that troubled our ancestors. It is not the freedom to believe or disbelieve or to disseminate religious truths that bothers them.” He also laments, although less prominently than in The Religion Clauses, the declining appreciation for church-state separation among members of the court and the academy. Rakove also rejects an originalist approach, and he has a subtle but clear message for those conservatives who use it in their quest to remake church-state jurisprudence: You have your history wrong – this is not Madison’s idea of free exercise.

Though different in their coverage and approach, The Religion Clauses and Beyond Belief, Beyond Conscience serve as complementary bookends to the current debate over church-state matters. They are worth having on anyone’s bookshelf, but only if they are read.