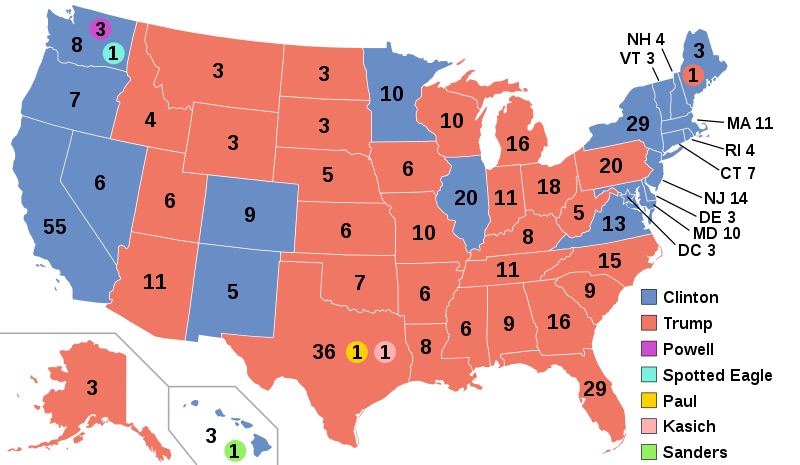 Voters in the United States do not directly elect the president and the vice president. Instead, the Constitution instructs the states to appoint “electors,” who vote for the president and vice president. In Washington and Colorado, along with almost all other states, the electors are appointed from the same political party as the ticket that won the statewide popular vote, and they meet in early December to cast their ballots. Next week the Supreme Court will consider whether state laws that seek to control the electors’ votes violate the Constitution. It’s a fascinating legal question, but it’s also an issue that could have a significant effect on the outcome of presidential elections in the future.

The question comes to the court in two different cases, involving two different sets of electors. The first set of electors, Peter Bret Chiafalo and two others, were three of the 12 electors for the Washington Democratic Party in the 2016 presidential election. At the time, the state’s law imposed a $1,000 fine on “faithless” electors – that is, electors who do not comply with their pledge to vote for the candidate who wins the statewide vote. The second set of electors – Micheal Baca, Polly Baca and Robert Nemanich – served as three of nine electors for the Democratic Party in Colorado, which did not impose a penalty on faithless electors but instead simply required electors to vote for the candidates who won the popular vote. All the electors were appointed to serve as presidential electors after Hillary Clinton and Tim Kaine won the popular vote in both Washington and Colorado.

Before the presidential electors actually voted, the electors in these cases went to court, asking federal judges to block the governments in their states from enforcing the “faithless elector” laws on the ground that the laws interfered with their right to vote freely. They wanted to be able to vote for someone other than the Clinton/Kaine ticket in the hope that doing so might move the fate of the election to the House of Representatives, which would eventually select someone other than Donald Trump as president. To that end, each of the faithless electors in Washington voted for Colin Powell for president and for someone other than Tim Kaine for vice president; their votes were sent to Congress and counted, but the state fined them $1,000 each for failing to vote for the nominee of their party. In Colorado, Micheal Baca was removed as an elector after he tried to vote for John Kasich, a Republican then serving as the governor of Ohio, instead of Clinton; Colorado election officials referred Baca to the state’s attorney general for possible perjury charges, but none were filed. The other Colorado electors, Polly Baca and Robert Nemanich, ultimately cast their ballots for Clinton.

The cases were originally scheduled for argument last week, but the arguments were postponed because of the COVID-19 crisis. And although the cases were originally consolidated – that is, slated to be argued and decided together – the court announced in early March that Justice Sonia Sotomayor would recuse herself from the Colorado case because she is friends with Polly Baca.

Before the justices can reach the merits of the two cases, they need to decide a threshold issue in the Colorado case: whether Micheal Baca has a right to sue (known as standing) at all. The state argues that he does not because as an elector he is a state official, and the Supreme Court has ruled that such officials cannot bring federal lawsuits challenging the constitutionality of state laws that outline their official duties when they are not actually affected by the laws. (The court of appeals ruled that Polly Baca and Nemanich did not have standing because they were still able to serve as electors.) Moreover, the state adds, Micheal Baca did not suffer the kind of injury required to bring a lawsuit in federal court: “Colorado did not fine him, prosecute him, or impose any other” negative consequence that the Constitution would recognize. All that happened, the state concludes, was that Baca lost some political power.

Baca counters that because of his effort to cast a ballot for Kasich, he was removed from office and barred from voting. Colorado election officials also referred him to the state’s attorney general for possible perjury charges. That is exactly the kind of “concrete injury” that would be addressed by a ruling in his favor, Baca says, and he therefore has a legal right to sue. But in any event, he points out, the justices undoubtedly can reach the issue presented in the Washington case.

Turning to the merits of their cases, the electors argue that although Article II of the Constitution gives states the power to “appoint” electors, nothing in the Constitution suggests that the state has the power to bind electors to follow the popular vote. If it did, the electors note, the states could also – for example – ban electors “from voting for candidates who fail to release” their tax returns or visit the state.

Quoting Alexander Hamilton, the electors contend that the Framers specifically contemplated that electors would be “free agents” who could choose the best-qualified candidates for president and vice president, even if that did not correlate with the popular vote. The 12th Amendment, ratified in 1804, requires electors to vote separately for president and vice president. But that amendment did not affect the role of the electors themselves – even after electors in presidential elections in the years leading up to the amendment voted contrary to expectations. “The rule that had existed before the Twelfth Amendment would thus continue after the Twelfth Amendment,” the electors assure the justices: Electors “could vote as they wished.”

Historical practice also confirms that electors have the right to make their own choices when voting, the electors suggest. Congress “has counted more than 180 anomalous electoral votes for either President or Vice President” – including seven such votes in January 2017 –  and “no such votes have ever been rejected.”

The electors acknowledge that “our current political culture views the power of presidential electors differently” from the Framers, so that electors are now regarded primarily as “mere delegates” who implement the will of the people, rather than exercising their own discretion. But changes in the public’s expectations, the electors stress, cannot change the text of the Constitution.

The states, not surprisingly, have a very different view. By giving the state legislatures the right to “direct” the “Manner” by which electors will be appointed, they contend, the text of Article II allows states not only to select but also to control their electors – including by requiring them to vote for the candidate who wins the popular vote in a state’s election. This makes sense, the states say, because “the power to establish requirements for state elections, including the selection of presidential electors, ‘would mean little without the [states’] ability to enforce them.’” Indeed, the states tell the justices, unless the states had this power, they wouldn’t be able to remove electors who, for example, couldn’t meet residency or age requirements. Electors also would be able to freely “violate their oath, take a bribe, or cast a ballot for a constitutionally ineligible candidate” – all of which would render voters’ choices meaningless – unless states had the power to remove electors.

As a historical matter, the states suggest, the Electoral College was intended to be a compromise that gave the states a role in electing the president. There was no consensus at the Constitutional Convention on the role of electors, and some Framers actually had the opposite view from Hamilton, they say. The 12th Amendment was ratified so that electors could cast separate ballots for president and vice president, the states acknowledge. But by the time it was adopted, everyone understood that the role of an elector was to follow the will of a state; the amendment does not “purport to confer unbridled discretion on electors” anywhere.

The historical practice in the years following the ratification of the Constitution also confirms that “the public understood” that “electors were expected to support the prevailing party’s nominees,” the states assert. And that has in fact been the practice, as “[l]ess than one percent have ever been faithless.” Indeed, the states note, most states no longer even list the names of electors on ballots: Because there is an assumption that the electors will follow the voters’ choice, the electors’ “identities are irrelevant.”

The fact that Congress may have counted faithless ballots in the past, cast by electors from states that did not have faithless elector laws, “says little about the States’ authority to enforce their binding statutes,” the states argue. Indeed, in 2016 Congress did count ballots from states that require their electors to cast ballots conforming with the popular vote: Not only did it count the vote from the elector who replaced Micheal Baca, but it also accepted the ballot for a Minnesota elector whom the state substituted for the original elector, who had tried to vote for Bernie Sanders instead of Clinton.

The states caution the justices that a ruling in favor of the electors would lead to “bizarre and dangerous consequences. It would mean that elections for the most powerful office in our government are and always have been hollow exercises,” because electors would vote however they wanted, no matter what they had promised to do or what the popular vote in a state was. “Such a ruling would profoundly undermine public confidence in the value of participating in our democracy,” the states conclude.

When the electors urged the justices to take up their cases, they emphasized that the justices should resolve the conflicting legal views on the constitutionality of faithless elector laws now, rather than run the risk that they might have to do so in the middle of a presidential election, when the Supreme Court’s resolution of the question might determine the outcome of the election. But even if the ruling in this case does not decide the 2020 presidential election, it has the potential to be very significant indeed. A decision is expected by summer.