Argument analysis: Will a broad statute be saved by a narrowing construction? 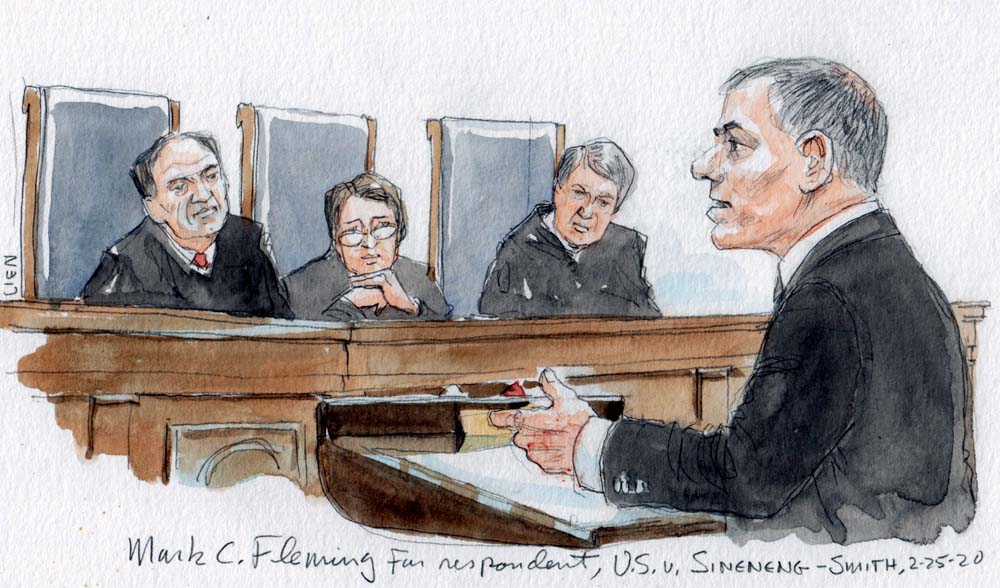 Yesterday the Supreme Court heard argument in United States v. Sineneng-Smith, a government appeal from a reversal of criminal convictions by the U.S. Court of Appeals for the 9th Circuit. At issue was 8 U.S.C. § 1324(a)(1)(A)(iv), which imposes criminal penalties on any person who “encourages or induces an alien to come to, enter, or reside in the United States, knowing or in reckless disregard of the fact that such coming to, entry, or residence in is or will be in violation of law.” Evelyn Sineneng-Smith had a large business helping noncitizens obtain lawful permanent resident status. When a major federal program she used expired, she kept doing paperwork under it anyway, charging fees for filing forms that she knew could not lead to legal status. Her mail fraud convictions for this conduct were affirmed and are no longer at issue. However, the 9th Circuit reversed her convictions for encouraging and inducing noncitizens to come to, enter or reside in the United States, concluding that the statute is unconstitutionally overbroad in violation of the First Amendment.

At argument, the fundamental question was what it means to “encourage” or “induce” unlawful presence: Do the words have their ordinary meaning as the 9th Circuit found, or, as the government argued, do they really connote the criminal law terms “aiding and abetting” and “solicitation”? The work of two law professors was prominent in the argument: Eugene Volokh, whose amicus brief induced many questions from the justices, and Wayne LaFave, whose “Criminal Law” treatise was referred to repeatedly.

The justices pushed Deputy Solicitor General Eric Feigin, representing the government, on the law’s application to relatively benign conduct. Justices Ruth Bader Ginsburg and Sonia Sotomayor asked about a prosecution of a Massachusetts woman who warned her noncitizen housekeeper that if she returned to her home, she would not be allowed to reenter the United States; Feigin “acknowledge[d] that that case is very close to the line of what we think the statute could permissibly cover.”

In response to a question by Justice Brett Kavanaugh, Feigin noted that there was no express exception for charitable activities such as providing food to hungry noncitizens, although he noted that other provisions of law might create a defense. Justice Stephen Breyer worried that universities, church groups and sanctuary cities might be liable for helping noncitizens under the statute. Chief Justice John Roberts asked Feigin whether a grandmother who encouraged her undocumented granddaughter to remain in the United States could be liable for saying, “I hope you will stay because, you know, I will miss you, things will not get better if you go back, so I encourage you to stay.” Justice Neil Gorsuch also invoked the grandmother later in the argument. Feigin denied that these words would violate the statute, because “complicity and solicitation … really requires substantial participation in some unlawful venture or trying to gin up some unlawful venture with the goal that the unlawful venture actually occur.”

Feigin also denied that the law would criminalize an attorney’s seeking a form of immigration relief for a client that is actually available. This is a potentially dramatic concession, given that every unauthorized migrant is theoretically eligible for relief via a private bill, comprehensive immigration reform or the exercise of some sort of executive discretion. Although these may well be astronomically remote possibilities in many cases, there is no unauthorized migrant whose status cannot be regularized.

Breyer asked Feigin if the problem could be solved by accepting the proposal in Volokh’s amicus brief that the statute be read as prohibiting solicitation and aiding and abetting, and limiting it to cases in which “what you are soliciting is a crime.” Gorsuch was also interested in this idea. Read that way, the statute would not apply to Sineneng-Smith, the housekeeper’s employer or the hypothetical grandmother, because being in the United States without authorization is generally not a crime unless the individual has previously been deported. But Feigin declined this invitation, noting that in many instances, the law criminalizes solicitation when the underlying conduct is only a civil violation, such as asking a minor to purchase alcohol, or posting a “White Applicants Only” sign when hiring. In the last words of his main argument, Feigin claimed that under the statute “you could decide to make prostitution a civil offense and still criminally punish recruiting prostitutes.”

Justice Samuel Alito picked up this point in Mark Fleming’s argument for Sineneng-Smith. Fleming conceded that the First Amendment would not be violated by prosecuting encouragement of suicide even if suicide itself were decriminalized. In a colloquy with Breyer, Fleming agreed that the statute would be constitutional if it only prohibited solicitation of crime, but he argued that to construe it that way would be “a bridge too far. It would be permissible if Congress had written ‘solicit,’ but it didn’t. It wrote ‘encourage’ or ‘induce.’”

Roberts wondered, presumably facetiously, if it would be necessary to get the approval of Congress and the president if the statute were dramatically narrowed to apply only to solicitation of crime. Kavanaugh and Justice Elena Kagan further explored the role of narrowing constructions and constitutional avoidance. Kagan asked: “When is it possible for us to narrow statues without being subject to the critique that we’re rewriting them?” Kavanaugh wondered: “Can you read the statute not to be the best interpretation but … a second best so as to save the statute?” Fleming responded that constitutional avoidance would not work in this case, in which such an interpretation would make the language “duplicative and redundant” of other provisions in the section.

Alito pushed Feigin on precisely what the statute requires. Feigin said that a defendant has to intend to bring about the result, that the noncitizen has to be aware of the inducement or encouragement and that “it requires some substantial amount of encouragement.” Alito and Kagan asked what “substantial participation” means, and Feigin admitted that words alone could be sufficient. If this is so, in the case of the hypothetical grandmother who really wanted her granddaughter to stay in the United States, one wonders why sincere inducement, known by the noncitizen, would not be enough to violate the statute.

Kagan pressed Fleming on the point that there have been few, if any, prosecutions infringing on First Amendment rights. Fleming answered that “one can expect that if this Court upholds the statute, it will continue to be threatened and used. And whether it it’s ultimately used does not matter because the First Amendment does not require us to rely on the grace of the executive branch.”

A majority of the justices seemed to be concerned that the statute as written is quite broad. This would imply sympathy for the analysis of the 9th Circuit. But a number of justices may also be reluctant to strike down the statute entirely if there is a reasonably available alternative interpretation. What is not clear is whether a majority of the justices think that the task they face is one of permissible narrow construction or impermissible rewriting. Sineneng-Smith may have reason for cautious optimism, because even if the statute is saved by a narrow construction, it would be different from the law presented to the jury. Therefore, as Alito noted, she would have an argument that she is entitled to a new trial.

Recommended Citation: Jack Chin, Argument analysis: Will a broad statute be saved by a narrowing construction?, SCOTUSblog (Feb. 26, 2020, 11:25 AM), https://www.scotusblog.com/2020/02/argument-analysis-will-a-broad-statute-be-saved-by-a-narrowing-construction/