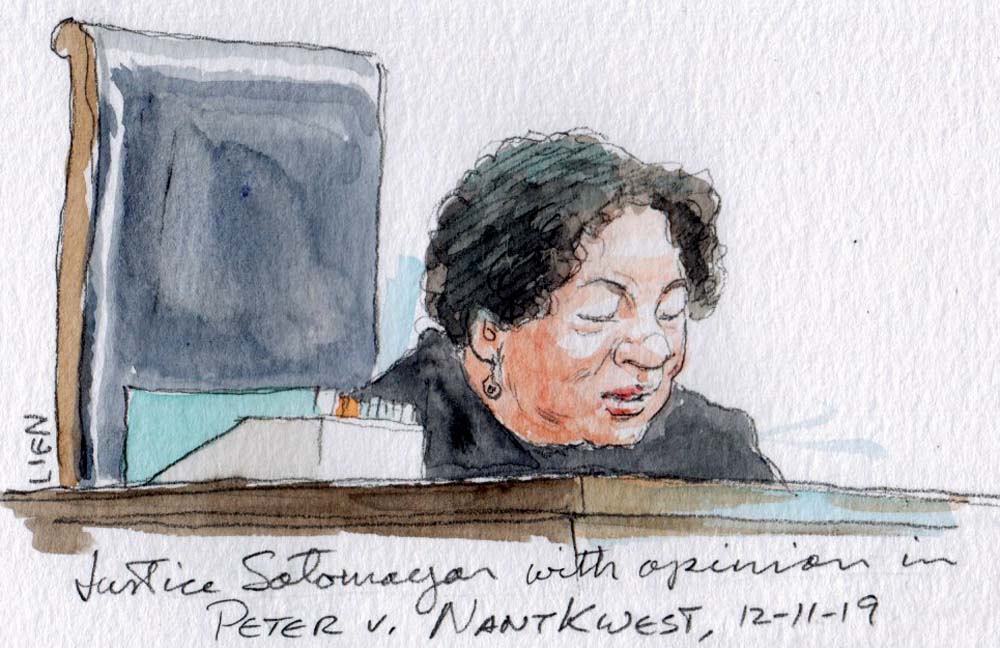 My assessment of the argument in Peter v. NantKwest viewed the case as a likely candidate for an early decision. To be sure, this morning’s opinion wasn’t the first of the 2019 calendar, but it was a close second – coming only one day after Tuesday’s decision in Rotkiske v Klemm.

A brief overview of the case confirms why it was so easy for the court to resolve quickly. The case involves an eccentric provision of the Patent Act (Section 145) that deals with procedures for disappointed patent applicants. Typically, a failed applicant appeals the decision of the Patent and Trademark Office to the U.S. Court of Appeals for the Federal Circuit (in Washington, D.C.), which reviews the PTO decision on the administrative record. Section 145 gives the applicant a second route: a lawsuit in the federal district court for the Eastern District of Virginia (think Richmond, Norfolk or Alexandria). Because that lawsuit offers a chance for the trappings of conventional civil litigation (discovery, expert reports, motion practice, zzzz), it has the potential to be much more expensive. Responding to that possibility, the statute always has provided (since its first adoption more than 180 years ago) that disappointed applicants, win or lose, must pay the government’s “expenses.”

Let me add a few words about the “American Rule,” under which litigants in American (as opposed to British) courts ordinarily pay their own attorney’s fees, even if they win. The Supreme Court has taken a “clear-statement” approach to the American Rule, under which a federal statute will be construed to require one litigant to pay the other side’s attorney’s fees only if the statute includes a clear or explicit statement to that effect.

So it should be no surprise that Justice Sonia Sotomayor was able to release a brief and unanimous opinion less than 10 weeks after the argument, concluding that the reference in Section 145 to “expenses” is not enough to justify obligating the private litigant to pay the attorney’s fees of the PTO (in this case, the allocable time of the in-house attorneys that the PTO employs). Her opinion predictably started from the American Rule, for her a “bedrock principle” and “basic point of reference.” She dismissed as “incorrect” the government’s argument that the American Rule applies only to statutes that shift fees to favor a prevailing party (as opposed to a statute like Section 145 that awards fees without regard to the result of the suit), pointing to a “line of precedents” that “confirms that the presumption against fee shifting applies to all statutes.”

Turning to the language of Section 145, Sotomayor had no trouble concluding that the unadorned reference to “expenses” does not exhibit the “clarity” that earlier cases “have required to deviate from the American Rule.” The ability of the government to offer numerous general definitions of “expenses” sufficiently “capacious” to include attorney’s fees provides, in Sotomayor’s view, only “scant guidance.” As she explained, “the failure to foreclose a fee award” is not enough to justify a departure from the American Rule. Nor is it important that the statute refers to “all” expenses: “Although the word [‘all’] conveys breadth, it cannot transform ‘expenses’ to reach an outlay it would not otherwise include.” In sum, she concludes, “Section 145’s plain text … does not overcome the American Rule’s presumption against fee shifting to permit the PTO to recoup its legal personnel salaries.”

The history of the provision certainly didn’t help the PTO’s case. For one thing – as Sotomayor pointedly noted – this case seems to be “the first time in the 170-year history of § 145” that the PTO included attorney’s fees in a reimbursement request. For another, Congress has explicitly provided for attorney’s fee awards in five distinct provisions of the Patent Act. “Congress[’] fail[ure] to make its intention similarly clear in § 145” provides yet more support for the court’s decision.

Perhaps the most surprising thing about this case is that the government appealed, and the Supreme Court chose to review, the Federal Circuit’s en banc decision refusing to award the fees the government sought.