Argument analysis: “Small potatoes” or not, court explores the meaning of the “presumption of judicial review” 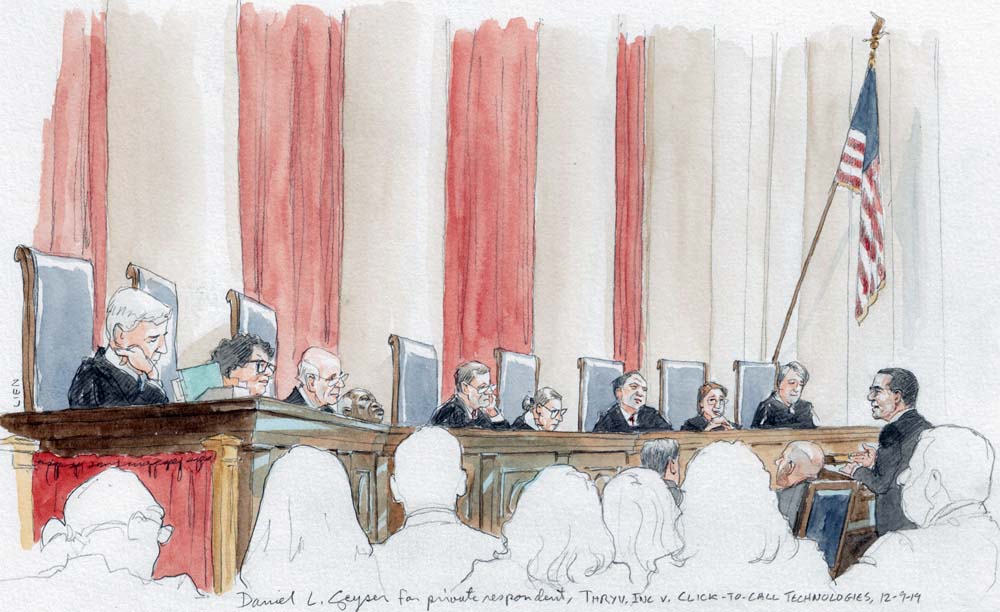 If you have become depressed about the current state of American government—the shouting, the posturing, the endless spinning—please read the oral-argument transcript in Thryv Inc. v. Click-to-Call Technologies LP. And for good measure, you might as well read the transcript in the immigration case argued earlier the same morning, Guerrero-Lasprilla v. Barr, which the justices repeatedly referenced during the Thryv argument. Both cases involve the extent to which federal courts can review executive-branch decisions when Congress has by law clearly precluded some judicial review. In both cases, the statute precluding review is ambiguous in crucial ways. In both, the justices are trying to figure out whether, and to what extent, the American “presumption of judicial review” applies.

You’ll find no shouting, no posturing, no spinning, but instead a complex and erudite exploration of the appropriate allocation of powers in our government. In the Thryv argument alone, you’ll find references to the constitutional “separation of powers,” the threat of “whimsical executive decisions” and even “what we were fighting over at Yorktown.” All of this in a patent case that, as Chief Justice John Roberts recognized, may be “small potatoes” even within the narrow realm of patent law. It’s the Supreme Court, and the U.S. government, at its best.

That’s the big picture, but now let’s dive into the details of the case, as the justices themselves did. Under the Patent Act, any person can seek to initiate an administrative procedure known “inter partes review” to challenge the validity of an issued patent, provided that the person has not been served with a complaint alleging infringement of the relevant patent “more than 1 year” before the petition seeking the IPR. That one-year time bar is contained in section 315 of the Patent Act. The government has conceded in its briefs, and again at oral argument, that the IPR in this case was wrongly instituted well after the one-year time bar had expired.

The question in this case is whether the federal courts can review and correct the Patent Trial and Appeal Board’s mistake in instituting the IPR given that, under Section 314(d) of the Patent Act, the decision “whether to institute an [IPR] under this section shall be final and nonappealable.” Click-to-Call and the court of appeals below have emphasized that the statute precluding review insulates agency decisions made “under this section”—i.e., under Section 314—and the agency’s error in this case arises from a misreading of another section—Section 315. Thryv and the government, both respondents in the case, argue that the agency’s mistake was still an error in a decision to institute the IPR and thus should be nonreviewable.

Three points during the argument seemed to give some insight into the justices’ thoughts.

It was to be expected that the court’s prior decisions in Cuozzo Speed Technologies v. Lee and SAS Institute Inc. v. Iancu would be discussed extensively during oral argument, but Justice Stephen Breyer’s characterization of the two cases appeared surprisingly unfavorable to Thryv’s and the government’s arguments for precluding judicial review.

“[L]ook at Cuozzo, and look at SAS,” Breyer began his question to Jonathan Ellis, the assistant to the solicitor general arguing on behalf of the government. “Everybody,” he continued, before correcting himself to say, “I think several of us have the same problem.” The initial slip suggests that many and perhaps even all the justices might see the two cases the same way Breyer does. “In Cuozzo,” the agency was “making a decision about this claimed patent,” and review of that decision was precluded. “SAS doesn’t say that’s wrong [but] it tries to take that [precedent] and narrow it somewhat by focusing really on the heart of what that was about, which is this individualized decision.” SAS, in which judicial review was permitted, and this case both concern “a statute” that presents “a general question.”

Perhaps Breyer was merely asking the government a tough question, but his preface suggests that several justices are thinking that the court’s prior precedents in Cuozzo and SAS can be reconciled by emphasizing that judicial review is more likely to be precluded when the agency is making an “individualized decision” about a “claimed patent,” and less likely to be precluded when the agency is interpreting a statutory constraint on agency power like the one-year bar in Section 315. That’s the way Click-to-Call would like the justices to view their prior precedents, and Breyer’s question shows that the argument has some resonance with the court.

If Breyer’s question to Ellis might have seemed to favor Click-to-Call, several other questions seemed to help Thryv and the government by playing down the statutory constraint on the agency’s power. Roberts was the main proponent of this theme. He called the underlying issue—about whether the agency should commence an IPR—“small potatoes” because the agency’s decision about “the basic issue of the patent validity is something you’re going to get” judicially reviewed. He also correctly noted that the agency had “a number of avenues to” review the validity of an issued patent even if this particular one is not available.

Later in the argument, Roberts again emphasized (to much laughter) that, concerning whether the agency can institute administrative review of an issued patent, “I don’t think it’s what we were fighting over at Yorktown.” And again, he stressed that “the ultimate question, the ultimate issue that affects the property rights in a patent, it’s going to be reached” in judicial review.

Roberts’ point came up time and again. Justice Neil Gorsuch, for example, asked Daniel Geyser, Click-to-Call’s counsel, “[W]hat’s the big deal? If you’re stuck going to ex parte review anyway [referring to another administrative avenue that remains open to the agency], why should we care?” Justice Elena Kagan pointed out that even “if this Petitioner is thrown out, somebody else can bring another petition.” Justice Ruth Bader Ginsburg also made the point that, because the “Board has already made the decision that the patent is no good” in this case, “[t]here’s something unseemly about nullifying the determination on the merits” based on a mistake in the decision about whether to institute an IPR.

If Thryv and the government win this case, I expect that this theme will be very important in the court’s opinion. It provides a limit on the claim that the traditional “presumption of judicial review” should put a thumb on the scale favoring review, even when Congress has clearly precluded some review. It also provides a possible basis to distinguish Guerrero-Lasprilla—the immigration case on preclusion of review argued the same day—if the justices want to permit judicial review in that case and deny it in this one. The issue in Guerrero-Lasprilla could be viewed as concerning the ultimate rights of noncitizens to stay in this country, while the issue in this case could be seen as a less significant procedural point.

If there’s a counter to this argument, it might be found in a point Gorsuch made while questioning Ellis. He noted that, while “traditionally, executive branch agencies have considerable discretion in evaluating the merits of claims in deciding whether to proceed with enforcement actions,” it’s also true that “traditionally, statutes of limitations or repose were deadlines that are clear and written in law, tend to afford enforceable judicial rights to citizens.” This acknowledges the theoretical core of the “small potatoes” assessment—that the agency’s error here was just an error in making its institution decision—but parries that point with an analogy favorable to the Click-to-Call—that at least some deadlines in statutory law are thought to be judicially enforceable. It also provides a basis to distinguish Guerrero-Lasprilla in the other direction—denying review in that case (because the underlying issue there arguably involves a mixture of law and facts), while permitting it here (because the issue involves pure statutory interpretation).

A final point concerns the issue discussed in my preview: The appointments of the administrative patent judges who made the erroneous, but possibly unreviewable, agency decision have been held unconstitutional in a decision by the U.S. Court of Appeals for the Federal Circuit. Although that issue is plainly not presented in this case, oral argument gave some hints that the justices are aware of the problem.

Repeatedly, the justices referred to the decision below as one made “by the director” of the Patent and Trademark Office. In one single question, Breyer three times stated that the case is about “where the director” makes an institution decision. Why such a great emphasis on the director’s making the decision when, in this case, the decision was actually made by a panel of three administrative patent judges?

In closing, I’ll make no prediction about the outcome of this case. It’s a genuinely hard case. But if you love law, reading this oral argument transcript is a joy. It’s filled with careful analysis of statutory law, constitutional principles, prior precedents and pragmatic consequences of the issue presented. It’s not an earthshaking case, but it shows the justices working hard to prove the truth in the adage that those who are trustworthy in small things can be trusted with large ones as well.