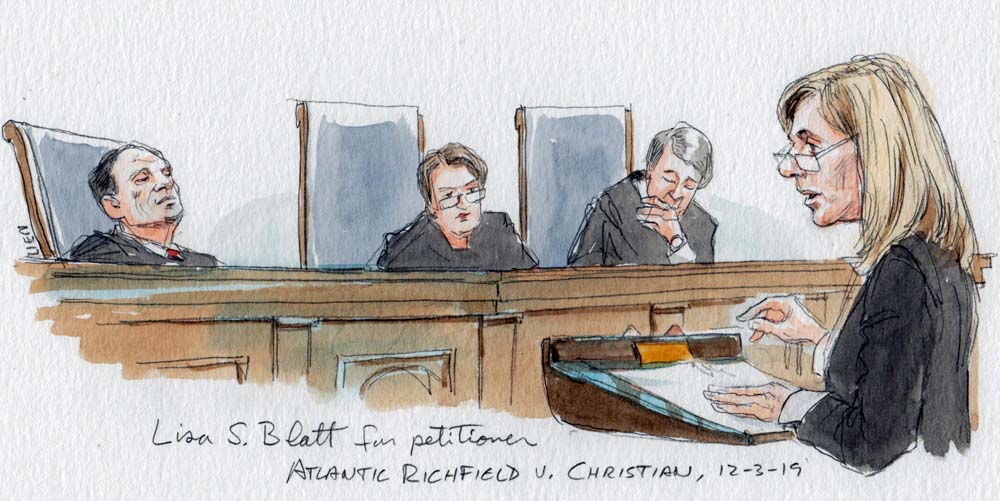 For decades, the Anaconda Smelter refined copper ore in southwestern Montana. The smelter provided copper for use in phone wires and power lines, but it was also a major polluter, spewing tons of arsenic and lead into the surrounding area. Atlantic Richfield Co., which owned the smelter when it shut down in 1980, has spent nearly a half-billion dollars cleaning up the hazardous waste created by the smelter, following a plan created by the federal Environmental Protection Agency. Landowners in the area want the company to go further and restore their property to its original condition, but Atlantic Richfield argues that their claims are trumped by the Comprehensive Environmental Response, Compensation, and Liability Act, the federal law that Congress enacted nearly 40 years ago to manage and clean up hazardous-waste sites. The Montana Supreme Court allowed the landowners’ claims to go forward, and this morning the U.S. Supreme Court heard oral argument in the dispute.

Arguing on behalf of Atlantic Richfield, lawyer Lisa Blatt framed the question before the Supreme Court as whether “hundreds of thousands of landowners” would be able to implement their “own piecemeal hazardous-waste cleanups.” It is “profoundly wrong,” Blatt told the justices, to assume that it is always better to remove hazardous waste than to leave it in place, and the EPA – rather than “jurors on an ad hoc basis” – should be responsible for evaluating the risks of leaving such waste where it is.

Blatt faced a flurry of questions from the court’s more liberal justices. Justice Sonia Sotomayor asked whether CERCLA would allow a state court to order a remedial plan that supplements, rather than conflicts with, the remedy that EPA had ordered.

Using a phrase that would surface again and again throughout the argument, Blatt stressed that an EPA-ordered remedial plan under CERCLA imposes both a floor – a minimum level of remedial action – and a ceiling – a maximum level. But what if I think that there is only a floor, Sotomayor countered, and that the EPA has the power to decide whether any plan can supplement the EPA’s own plan?

Blatt responded that the EPA would have to change the law to approve a supplement to its own plan. Justice Ruth Bader Ginsburg disagreed, telling Blatt that it “isn’t the law” but instead just “the Superfund plan for this site.” If the EPA wanted to allow the landowners to go forward with an additional cleanup, Ginsburg suggested, that approach wouldn’t be trumped by CERCLA.

Blatt pushed back, emphasizing that a CERCLA cleanup plan is in fact the law. “It’s a binding administrative order where Atlantic Richfield would incur massive penalties each day if it violated” the plan, Blatt said.

Justice Elena Kagan chimed in, telling Blatt that if Kagan were writing CERCLA, she would give all the power over hazardous-waste cleanups to the EPA. “That’s the sensible solution to have one party that makes all the rules in this.” But instead Congress gave states a “significant role,” particularly when it comes to imposing additional requirements regarding the release of hazardous substances. What if the Montana legislature, Kagan asked, believed that a lower level of arsenic in the soil would be better? Could the state do that?

Blatt responded that it could not. Otherwise, she cautioned, states could order “independent warring cleanups” that would “utterly destroy EPA’s whole design.”

Arguing for the federal government, which filed a brief supporting Atlantic Richfield, Assistant to the Solicitor General Christopher Michel warned the justices that what the landowners are seeking would jeopardize the EPA’s efforts to clean up hazardous waste, both at the Superfund site in this case and elsewhere.

Much of Michel’s time at the lectern was spent discussing whether the landowners are “potentially responsible parties” under CERCLA – the people or entities who may be liable for paying cleanup costs. Kagan observed that there are “obvious consequences” to labeling someone a PRP, most notably that the label can “deprive someone of doing some significant things they want to do to their land.”

Michel answered that, for purposes of remedial action, the PRP label would prevent a landowner from interfering with the remedy that the EPA had chosen to address the contamination, but that response drew complaints from Justice Brett Kavanaugh, who lamented that it “seems a very indirect way for Congress to have gone about this” to, “in essence, hinder a landowner from doing any significant action for decades.”

But Ginsburg saw an opportunity, noting that if the court concluded that the landowners in this case are PRPs, who under CERCLA would need the EPA’s permission to make any additional changes to their land, the justices could resolve the case without needing to address any of the more complicated questions lurking in it. Michel agreed, telling the justices that the federal government is “ready to listen” “to any proposals from the landowners.” 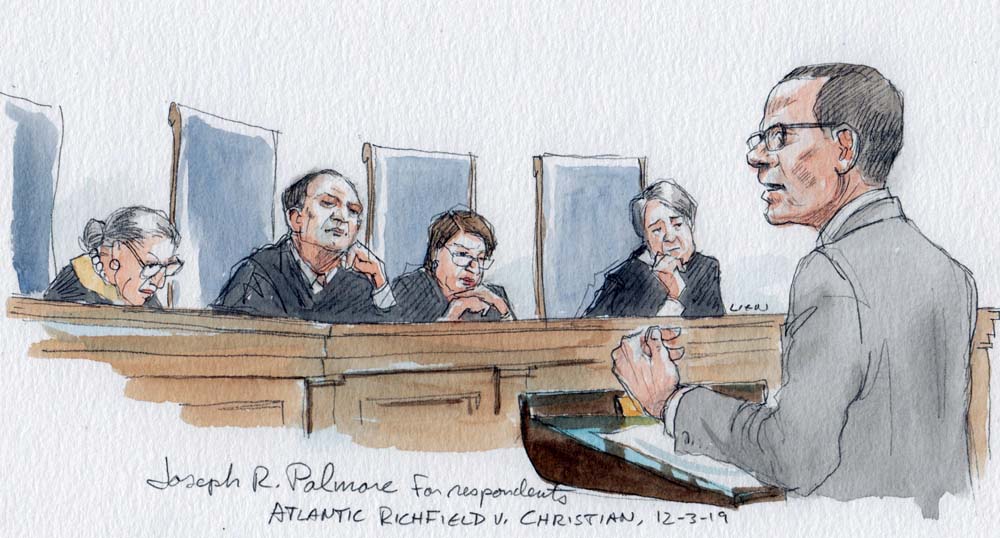 Arguing for the landowners, lawyer Joseph Palmore was less enthusiastic. The justices should not, he said, give the EPA the ability to control forever the landowners’ ability to remove even a shovel of dirt from their own yards. Palmore resisted any suggestion that the landowners’ remedial efforts might interfere with the EPA’s plan, telling the justices that, on 95% of the land at issue in this case, “literally nothing has been done.”

Chief Justice John Roberts pushed back, responding that nothing had been done because the EPA was worried about the effects of remediation on the local groundwater. But Palmore stood his ground, countering that the EPA had characterized the remedy for the groundwater as “technically impractical” – which, Palmore said, actually meant that it was just too expensive.

But a consensus seemed to form that, given the possibility that more remediation could also unleash additional hazardous waste, the EPA would need to be involved in approving that supplemental remediation. The only question, as Kavanaugh put it, seemed to be whether the owners would have to go to the EPA to seek permission or whether the EPA would have to go to court to block the owners’ efforts. Sotomayor seemed to speak for several of her colleagues when she reiterated that, if the landowners were regarded as PRPs, they would need to seek the EPA’s approval for the new remediation, and they would have administrative remedies available to them if the EPA rejected their request. At least, Sotomayor posited, there would be clarity for the landowners. “What’s wrong,” she asked, “with that?”

Palmore lamented that, under such a rule, landowners would need to go to the EPA for permission even if they wanted to dig out space in their yard for a child’s sandbox. There’s no evidence, he concluded, that Congress intended to give the EPA that kind of vast control forever.

But Kagan noted that it would be hard for the EPA to know when landowners were digging up their yards – a point that Blatt reiterated in her rebuttal, reminding the justices that the EPA would have no way to know if someone was removing uranium or digging up arsenic in his yard. And by the time Blatt sat down, it seemed likely that she would prevail.