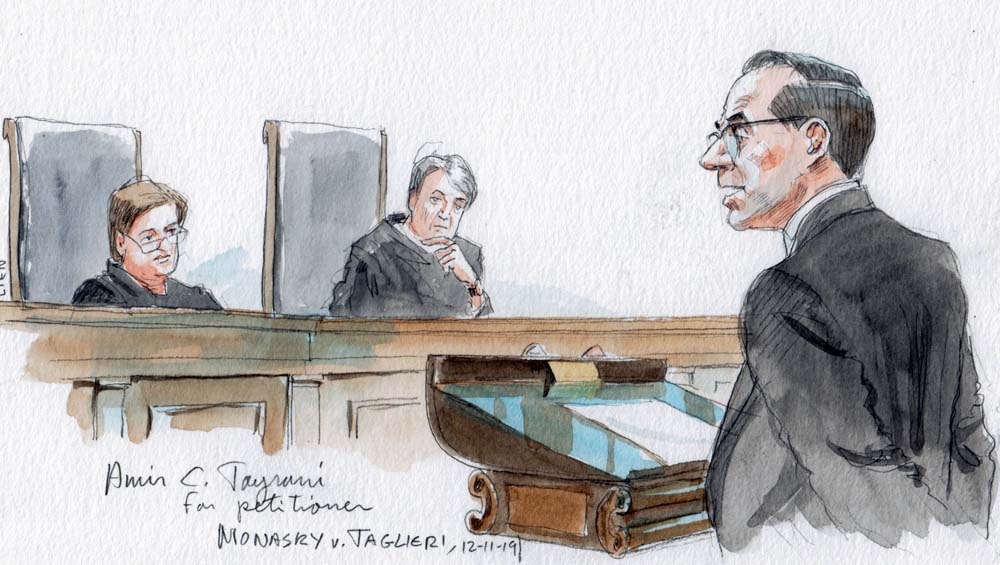 In 2015, Michelle Monasky left the domestic-violence safe house in Italy where she had been staying with her newborn daughter and traveled to her parents’ home in Ohio. Domenico Taglieri, Monasky’s estranged husband, later filed a lawsuit in Ohio, asking a federal court to order his daughter’s return to Italy. He relied on the Hague Convention on the Civil Aspects of International Child Abduction, which requires a child who is wrongfully removed from her country of “habitual residence” to be sent back to that country. But how should courts determine the “habitual residence” of a child, like Monasky and Taglieri’s daughter, who is too young to really know where she is? This morning the Supreme Court heard oral argument in the couple’s case. After roughly an hour of argument, they seemed likely to give Taglieri at least a partial victory, even if they didn’t necessarily agree with him on what rule should apply or how the case should proceed next.

The child at the center of the dispute, known as A.M.T., was born in Italy in February 2015. Monasky, who is a U.S. citizen, married Taglieri, an Italian citizen, in 2011, and the couple moved to Milan, Italy, in 2013. Monasky has testified that after they arrived in Milan, she was the victim of domestic violence, and although she was pregnant by then she did not move with Taglieri when he took a job a few hours away in Lugo. After A.M.T.’s birth in Milan, Monasky told Taglieri that she wanted a divorce and to return to the United States, but Monasky and A.M.T. then went to stay with Taglieri in Lugo. After an argument with Taglieri, Monasky went to the police and then to the safe house, where she stayed for two weeks before departing for the United States with A.M.T., who was then eight weeks old.

Taglieri went to court in Italy to terminate Monasky’s parental rights. And he filed this suit in the United States under the Hague Convention to have A.M.T. returned to Italy. A federal district court agreed with him that A.M.T.’s “habitual residence” was Italy and ordered that she be returned to that country, and a federal appeals court upheld that order. A.M.T., who was by then two years old, traveled back to Italy and stayed there while her mother’s appeals were pending.

Arguing on Monasky’s behalf this morning, lawyer Amir Tayrani observed that the Hague Convention was designed to protect children from wrongful removal from their habitual residences. But here, he stressed, the convention separated A.M.T. from her mother, the only caregiver she had known, and A.M.T. was forced to return to Italy even though she had only spent eight weeks there. The court of appeals, Tayrani told the justices, was wrong to conclude that Monasky and Taglieri could “share an intent to raise A.M.T. in Italy even if they had no meeting of the minds” about where their daughter would grow up. And there is no way that A.M.T.’s habitual residence could be Italy, he continued, when – as the district court found – Monasky intended to return to the United States with A.M.T. as soon as possible after the baby’s birth.

Tayrani faced a series of questions about potential problems that the justices saw in his position. Justice Ruth Bader Ginsburg started things off, asking whether under his approach some infants might not have a habitual residence at all for purposes of the convention, because their parents had never agreed on where to raise their child.

Tayrani allowed that such a scenario could occur but suggested that it would be relatively rare, because it would only happen during the “unusual case” in which a couple’s relationship broke down during the mother’s pregnancy or immediately after birth. Normally, he said, a child will have a habitual residence.

But Ginsburg’s concerns were not necessarily assuaged. She pointed out that many relationships that result in cases being brought under the Hague Convention are often “so acrimonious that the chances of agreement” between the parents about the child’s habitual residence are “slim to none,” which would leave children without a habitual residence.

Justice Samuel Alito also seemed skeptical. Under that position, he told Tayrani, “either parent could snatch her. Possession would be ten-tenths of the law?”

Chief Justice John Roberts noted that no other signatory to the Hague Convention had adopted a rule requiring the parents to have a “meeting of the minds” about the child’s residence. Indeed, he observed, some countries had specifically rejected such a rule. “We have said one of the important guiding principles when interpreting the Convention is what other countries do. Why,” Roberts asked Tayrani, “should we depart from that guideline here?”

Several justices worried aloud about the possible impact of a ruling that would lead to A.M.T.’s return to the United States, after spending three years in Italy. Roberts asked Tayrani whether there is any other case in which a re-return order has been entered after such a long time. When Tayrani responded that he did not know, but that Taglieri could raise any concerns about A.M.T.’s return in the Italian courts, Roberts interjected that the additional proceedings would only further prolong the case, which had already been “delayed far longer than the Convention contemplated.”

Alito also addressed the other issue that the justices had agreed to tackle: whether the U.S. Court of Appeals for the 6th Circuit should review the district court’s ruling on A.M.T.’s habitual residence “de novo” – that is, from the beginning – or instead use a more deferential test. Tayrani, whose client lost in the district court, urged the justices to use a “de novo” standard, but Alito expressed puzzlement. If the key question in determining the habitual residence of a baby is whether there is an agreement between the parents, isn’t that a question of pure fact, which is usually reviewed more deferentially?

Justice Brett Kavanaugh chimed in, asking whether “de novo” review would generally prolong Hague Convention cases by increasing the likelihood that the losing parent would file an appeal, knowing that the court of appeals would start over again with its review. Tayrani countered that these cases are hotly contested, so that the losing parent is likely to appeal no matter what the standard of review is.

Justice Elena Kagan proposed a different rule, championed by Judge Danny Boggs of the 6th Circuit, to determine the habitual residence of a baby: If a baby has lived somewhere her whole life, Kagan suggested, courts would normally presume the baby’s habitual residence to be the country in which she lived. Such a rule, Kagan told Tayrani, is an “administrable rule” that “provides a lot of guidance” to the courts, and it would also deter abductions.

But both Sopan Joshi, the assistant to the U.S. solicitor general who argued on behalf of the United States, and Andrew Pincus, who argued for Taglieri, declined to sign on to that standard completely. Joshi told the justices that “habitual residence” is a “flexible, fact-intensive concept” that focuses on where the child usually lives. Courts should look at the facts, Joshi stressed, rather than using a “rigid test.”

Roberts posited that “habitual residence” is a “meaningless concept for” infants. After all, Roberts observed, eight-week-old infants “don’t have habits. Well,” Roberts joked, “other than one or two.”

Kagan pressed Joshi about whether, in light of the government’s position, Boggs’ rule “is right.” Joshi responded that Boggs “may well be right, absent unusual circumstances.”

Pincus faced similar questions from Kagan, who described the Boggs test as “simpler than what the” government proposes. Why don’t you just say, Kagan asked, that for very young children, a child usually lives where she has lived with both parents all her life? Pincus countered that such a rule would “apply too broadly,” but that led Kavanaugh to ask whether any needed limitations could be provided by the caveat “absent unusual circumstances.”

A few minutes later, Ginsburg told Pincus that this was a “troublesome case.” Monasky alleges that she was abused by Taglieri, Ginsburg explained, so “you’re putting her in the position of, if she wants to escape domestic violence, she has to leave her child behind.” Breyer added that Monasky didn’t speak Italian and didn’t have a job.

Pincus countered that Monasky had other choices besides leaving Italy with A.M.T. She was already in a domestic-violence safe house, Pincus pointed out, and the district court found that she generally seemed to intend to stay in Italy “at least for an undetermined period of time.”

Taglieri and the government parted ways when asked about possible next steps in the case. Perhaps wanting to avoid urging the Supreme Court outright to rule against an American mother, Joshi told the justices that the court’s usual practice when announcing a new standard – for example, if it were to decide to use the “Boggs rule” – is to remand.

Pincus disagreed strongly, telling the justices that virtually all of the factors weigh in favor of Italy’s being A.M.T.’s habitual residence. She was there, he stressed, with both parents, and there are no other facts that would lead to a different conclusion. More broadly, he continued, tomorrow is the three-year anniversary of A.M.T.’s return to Italy. It would be good for the custody case that is currently pending there to go forward without this issue hanging over it.