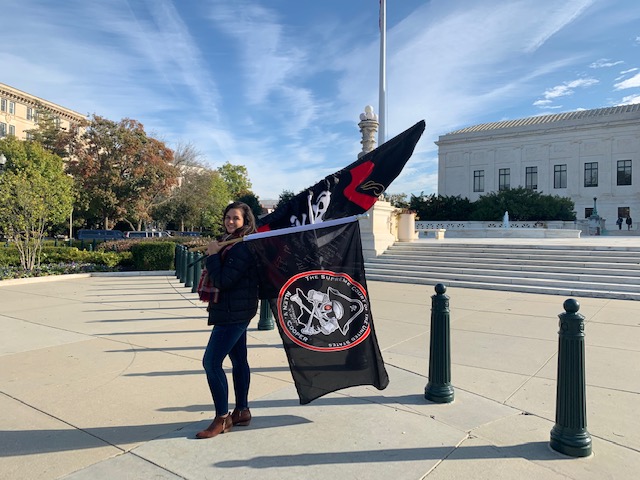 Blackbeard went unmentioned in Tuesday’s arguments in Allen v. Cooper. But the justices plundered North Carolina’s argument that it enjoyed sovereign immunity from suit for damages for copyright infringement.

Representing petitioner Frederick Allen, who sued North Carolina for infringing his copyrights in photographs and videos documenting the salvage of artifacts from Blackbeard’s sunken flagship, Derek Shaffer used his two-minute opening to argue that when “states infringe the exclusive rights that Congress is charged with securing, Congress can make states pay for doing so.” The intellectual property clause of Article I Section 8 of the Constitution provides an “express constitutional mandate for Congress to protect specified private property rights against any and all intrusion,” thus “securing” exclusive rights against “all comers, exclusive against the world, including the government and including states.” Congress can fulfill that mandate only by abrogating sovereign immunity by statute and subjecting states to suit for their infringing conduct.

Shaffer fielded questions from Justices Ruth Bader Ginsburg, Elena Kagan, Samuel Alito and Brett Kavanaugh about Florida Prepaid Postsecondary Education Expense Board v. College Savings Bank, the Supreme Court’s 1999 decision holding that Congress could not abrogate state sovereign immunity under the patent provision of the intellectual property clause. Shaffer argued that abrogation under the patent provision had not been presented or briefed to the court in that case. Rather, the court relied on dicta in Seminole Tribe of Florida v. Florida that Congress could not abrogate under any power under Article I Section 8, dicta undermined by the court’s later decision in Central Virginia Community College v. Katz, permitting abrogation under the bankruptcy clause. Shaffer predicted that the court likely would have to reconsider Florida Prepaid, but insisted that he was not asking the court to overrule it.

Shaffer attempted to limit concerns about ever-expanding Article I abrogation. He explained that the copyright clause is the ideal reflection of the “plan of the convention waiver” of sovereign immunity, because Congress cannot grant exclusive rights in private property if states are free to infringe. In an exchange with Justice Sonia Sotomayor, Shaffer argued that the intellectual property clause states its purpose as to “promote progress,” a unique preamble that James Madison understood as ensuring that authors and inventors would be paid for their creations. It is “antithetical” to say that any government can infringe the rights Congress has secured.

Shaffer then turned to abrogation under Section 5 of the 14th Amendment, which requires that Congress create a statutory remedy that is congruent and proportional to the constitutional rights at issue. Alito wondered whether the record before Congress, showing 16 examples of state infringement, revealed a serious constitutional problem. Shaffer responded that these represented 16 constitutional violations, as it is difficult for a state to infringe a copyright negligently; infringement requires copying, which will be intentional in most, if not every, case. Shaffer denied that he was asking the court to overrule City of Boerne v. Flores, which established the congruence-and-proportionality standard for Section 5 legislation; unlike Boerne, in which Congress redefined substantive constitutional law, Congress in this case responded to a “cardinal sin” of states infringing on protected federal property. Kagan asked why 16 instances were enough here when eight instances of patent infringement did not create a sufficient record in Florida Prepaid. Shaffer focused on the distinction between patents and copyrights—patent infringement could be innocent (for example, when two inventors independently arrive at an invention), whereas copyright violations require copying, suggesting intentionality. In addition, some of the 16 examples in the record involved multiple instances of infringement. And Schaffer insisted those examples represented the “tip of the iceberg”: Congress legislated to get ahead of a growing and serious problem, attempting to predict and prohibit what has come to pass. Alito appeared skeptical on the final point, wondering whether Congress can predict violations.

North Carolina Deputy Solicitor General Ryan Park argued on behalf of the state. Park maintained that the Constitution preserves state sovereignty unless there is “compelling evidence that the states surrendered it when they ratified a particular constitutional provision.” Allen failed to identify any historical evidence that anyone at the founding contemplated damages lawsuits against states for copyright infringement. According to Park, state sovereign immunity limits congressional authority to expose state treasuries both to expansive liability going far beyond the due process clause and to the Copyright Remedy Clarification Act’s “exorbitant” financial remedies of up to $150,000 per infringement.

Kavanaugh and Justice Stephen Breyer questioned Park about the possibility of multiple, rampant state uses of copyrights for which the authors receive nothing, which cannot be squared with a grant of exclusive rights. Park argued that the ordinary remedy for a state violation is an injunction, which Breyer said does nothing for an infringement that occurred yesterday. Park responded that a plaintiff can bring a direct constitutional claim for truly intentional or deliberate infringement for which no alternative remedy is available—because the copyright violation would constitute a due process violation, the statutory remedy would be congruent and proportional as applied to that case. Ginsburg suggested that this case “sounds pretty intentional to me”—North Carolina was alleged to have infringed, potential litigation was settled, then North Carolina resumed identical infringing conduct. Park argued that the case involves not infringement or a copyright violation, but a dispute over the scope of the license petitioners granted to the state in the settlement and a possible breach-of-contract lawsuit.

Kagan and Park had an exchange about the legislative record and what Congress must do to meet the standards of Boerne. Park argued that the record should focus on identifying intentional infringement, which violates both the CRCA and the Constitution. Kagan responded that Congress can devise prophylactic rules—such as saying that 80 percent of violations are intentional and prohibiting all violations in the statute, because an unintentional violation would be rare and difficult. Park conceded that Congress can legislate beyond a pure constitutional violation, but he argued that the remedies must be somewhat tailored, which is not true for the CRCA’s exorbitant damages of $150,000 per infringement. Kagan later asked whether imposing the same remedy—damages—on the states as for everyone else is, by definition, proportional. Park responded that such an argument constitutionalizes copyright law, turning ordinary infringement into a due process violation.

Ginsburg suggested that there is “something unseemly” about a state’s being able to hold copyrights and sue for infringement of their copyrights but also to say, “we can infringe to our heart’s content and be immune from any compensatory damages.” She asked whether Congress could condition states’ copyright privileges on their agreeing to be subject to suit for infringement. Park said this would create an unconstitutional condition, although he agreed that Congress could remove the anomaly by denying states the right to hold copyrights.

Park then offered stare decisis reasons for not overruling Florida Prepaid. Kavanaugh seemed skeptical, because that case’s patent clause analysis consisted of two sentences. Ginsburg and Kagan questioned the state’s argument for reliance, noting that the state seemed to be saying it was relying on precedent to infringe other people’s rights. Park argued that the state acted in the good-faith belief that it was allowed to post the copyrighted materials, something it would not have done if it might be on the line for up to $150,000 per infringed work.