Ask the authors: An innovative approach to learning the court’s biggest cases 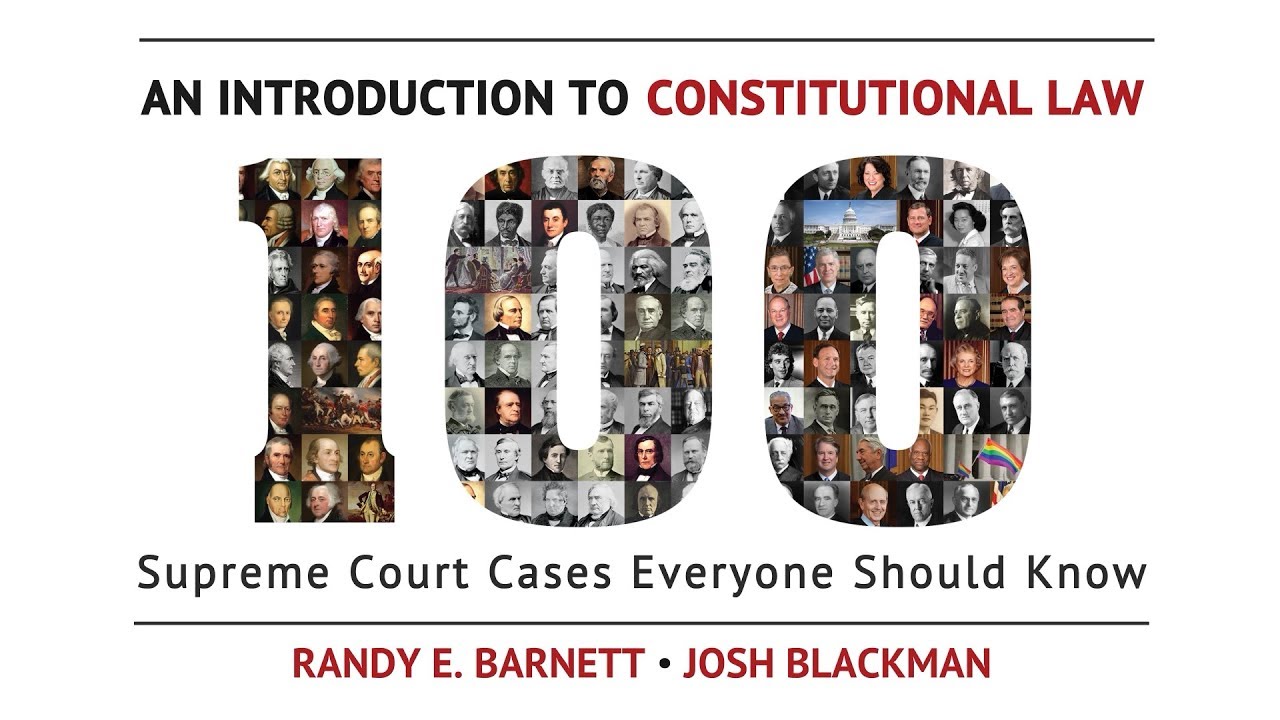 Textbooks of constitutional law have, for decades, followed a similar pattern in their quest to help law students synthesize a surfeit of Supreme Court decisions. In their new multimedia platform, “An Introduction to Constitutional Law: 100 Supreme Court Cases Everyone Should Know” (Wolters Kluwer, 2019), Professors Randy Barnett and Josh Blackman take a different approach. 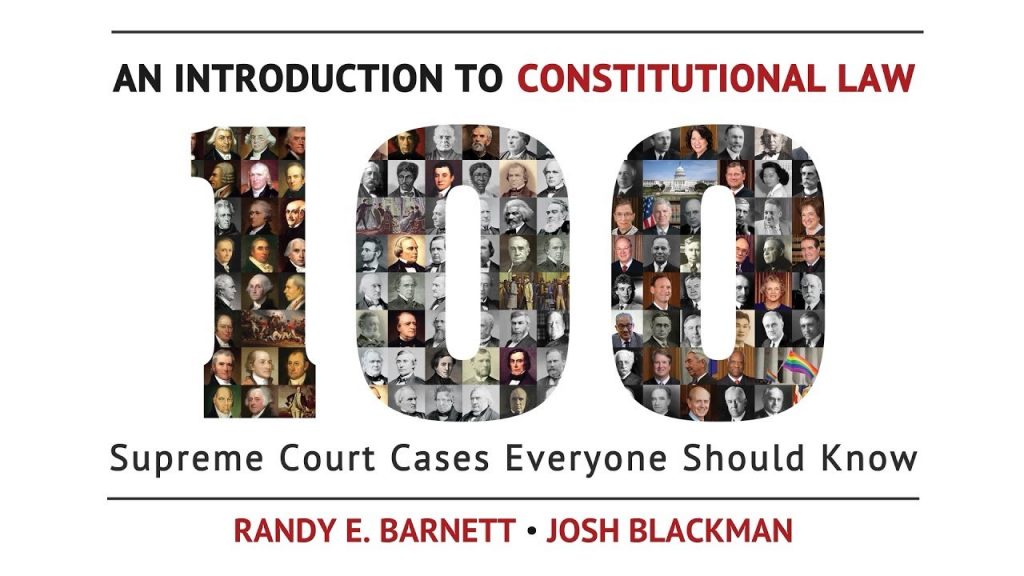 Most of the cases covered in “100 Supreme Court Cases” are traditionally taught in law school. But some are not, and the book has a wider aim: to present an overview of the most significant decisions from our nation’s highest court, in a way accessible to law students and the general public alike. The accompanying 11-hour video library includes short clips for each case, which average about 10 minutes in length. These resources both complement the text and present a novel way of learning the material.

The authors were kind enough to answer questions about “100 Supreme Court Cases” for the blog. Welcome, Randy and Josh, and thank you for doing this.

Question: Can you tell us how this project came about?

Josh: In 2016, Randy invited me to be a co-author on his constitutional law casebook, “Constitutional Law: Cases in Context.” I accepted this opportunity of a lifetime, and — as I am wont to do — quickly proposed another project: to develop a series of videos to teach students about the most important cases in the constitutional canon. These films would incorporate photographs of the parties, as well as audio from oral arguments and opinion announcements. Students would even be able to binge watch a semester of constitutional law in a single sitting. Randy enthusiastically backed the project.

Randy: Once we were into the project of writing and producing the videos — which took two years to accomplish — we decided that we had something that was too important to confine to law students whose professors adopted our casebook. So the idea of a free-standing book was born to enable anyone to gain convenient access to the videos — as well as a written description of these cases that goes beyond what is in the videos.

Question: Is the book intended as a new, stand-alone text for constitutional law students? As a study supplement? As a guide for the general reader?

Randy: The book and videos were originally conceived for law students to read when taking constitutional law from professors who used other casebooks. The narrative we present will enrich any course on constitutional structure or rights.

Josh: We also wrote the text and videos to make constitutional law accessible to college students, as well as advanced high-school students. In particular, we hope A.P. government and constitutional law classes adopt our book. Also, the book and video library will help develop an excellent home-school course on constitutional law. Finally, the general public will benefit from a single resource that can teach the entire canon of constitutional law in 300 pages.

Question: Tell us about your process for picking cases. Was 100 always the goal, a framework in which you aimed to fit your selection? Or was the approach more organic?

Josh: Initially, it was not our goal to select 100 cases. Rather, we selected the cases from our casebook that we thought that all law students should learn. We soon realized that we had 103 cases. We recognize the marketing potential of having an even number like 100, so trimmed off a few.

Randy:  Our goal was to focus on the key cases that are said to be in the “constitutional canon” and “anti-canon” so people can understand how constitutional law came to be what it is today. It is our experience that current constitutional law doctrines are best understood as the result of a 200+ year process of decision-making by a single court: the Supreme Court of the United States. All constitutional lawyers — and all the justices — carry in their heads a narrative of how and why the law developed as it has. This narrative is more important than any single doctrine or rule. We think this narrative is best told as a narrative. And within it are the individual stories presented by each case. When we were done picking the cases, we thought we needed to tell the larger story, and it turned out there were 100 of them.

Randy: A few. For example, Buchanan v. Warley is a much-neglected 1917 case that complicates the received wisdom about the so-called Lochner-era court. In Buchanan, that court invalidated a racially restrictive zoning law in Louisville, Kentucky, that forbade whites from selling houses to blacks in white neighborhoods and vice-versa. For the court it was a straightforward “due process of law” case that unreasonably infringed upon property rights of both buyers and sellers, blacks and whites, without an adequate police-power rationale. But this case is, by far, the exception. With limited space (and budget), we generally confined ourselves to the cases most constitutional lawyers would know and students need to know.

Josh: We also added two cases students seldom study. In Hepburn v. Griswold, the Supreme Court held that Congress could not force people to accept paper money as “legal tender.” This 4-3 decision by Chief Justice Salmon Chase was an important decision that limited the scope of federal power. However, one year later, after two new appointments by President Ulysses Grant, the court reversed course. Knox v. Lee, split 5-4, upheld the federal Legal Tender Act. This decision adopted a broad understanding of implied powers that would presage the court’s post-1937 jurisprudence.

A preview of Knox v. Lee. Previews are available at conlaw.us/cases, with the full videos available for purchase.

Question: Tell us about your division of labor. What was it like to collaborate?

Josh: I would write the first drafts of each of the 63 scripts and storyboards we relied on. Randy would then revise and expand the drafts. Summarizing a complicated case in a few pages is no easy task. We spent countless hours debating about what should be included and excluded. And we didn’t always see eye to eye on prose. Randy likes longer sentences. I don’t mind starting sentences with “however.” But, in the end, we knew that any content that satisfied both of our meticulous standards was ready for primetime.

Randy: Over the course of two years, we spent nearly 60 hours at Trivision Studios in Chantilly, Virginia. After sitting through hair and makeup we took our position under the bright lights and in front of the green screen. The Trivision team skillfully manned the cameras, adjusted the lighting, positioned the microphone and rolled the teleprompter. Each of us monitored the delivery of the other to catch mistakes. Not infrequently we had to revise the script on the teleprompter in the studio because speaking the script out loud revealed errors we had missed when it was just in writing.

Josh: After we wrapped, Trivision produced first cuts of each video. At that point, Randy and I had to review each and every frame to ensure that the scripts and storyboards were faithfully followed. It could take three hours to review a 10-minute video. On average, each video required four or five rounds of edits. Eventually, we signed off on each of the 63 videos. They total nearly 11 hours in length. We are very proud of the project.

Randy: While I proofed all of the videos for errors, it was Josh alone who provided the storyboarding for the graphics and illustrations that make the story of constitutional law come alive. My decision to add him to my casebook was completely vindicated. I would never have conceived of this project — much less executed it — without him.

Question: In the years ahead, the Supreme Court will undoubtedly decide cases that deserve consideration among the 100 most important. And technological progress will make digital aids, like your accompanying videos, more and more advanced. What do you view as the future of this project?

Randy: The “canon” sometimes gets revised over time. If that happens, we will need to revisit some of our videos. But the great majority will hold up as accurate descriptions of how and why the cases were decided the way they were. This is one of the virtues of our casebook. As time goes by, you only need to extend the narrative with some new cases (and drop cases that no longer serve a pedagogical purpose). You don’t need to completely reorganize the book. So, yes, we will need to add additional cases. But this is an expensive process. Our 63 videos covering 100 cases cost about $100,000 to produce. Josh and I had to pay part of that expense out of our own pockets. (That’s why you cannot watch them for free on YouTube, which we would have preferred.) But if the book and videos are a commercial success, I think Wolters Kluwer will pay for some new ones to be added when we revise our casebook, which happens every three to four years. When we do, I know I can count on Josh to find more amazing pictures, audio and graphics to make these cases come alive to a modern audience.