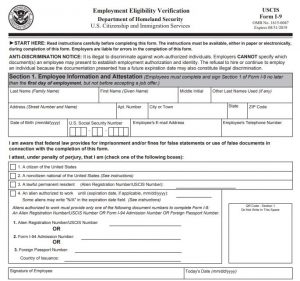 In Kansas v. Garcia, the state of Kansas appeals the Kansas Supreme Court’s ruling that the federal Immigration Reform and Control Act preempts the state’s prosecution, under state identity- and information-theft statutes, of three unauthorized noncitizens who used stolen social security numbers to gain employment. As with other recent immigration federalism cases, Garcia acutely presents the conflict between states interested in immigration enforcement and a federal statutory scheme that conceives of the federal government as the primary, if not sole, enforcer of immigration law.

Since IRCA’s enactment in 1986, the “I-9” procedure it sets out for verification of work authorization is now familiar to anyone, citizen or noncitizen, who has ever been employed in the United States. Although IRCA requires employees to present documentation of their legal eligibility to work, penalties under the act are primarily directed against employers who knowingly hire unauthorized workers. The act also provides for civil penalties against unauthorized employees and for federal prosecution when employees commit fraud in connection with the verification process.

By enacting this federal scheme, Congress preempted several state laws prohibiting unauthorized employment. In addition, IRCA includes a provision restricting the use of I-9 information for law-enforcement purposes. Specifically, Section 1324a(b)(5) of the statute provides that such a form “and any information contained in, or appended” to it “may not be used for purposes other than for enforcement of” IRCA itself or specific federal crimes related to false statements, fraud, misuse of visas and other immigration documents, and perjury.

In the face of IRCA’s limitation, Kansas, in the course of this litigation, abandoned its reliance on the I-9. Instead, the state based its prosecutions on identity information entered on federal and state tax-withholding documents (the W-4 and K-4 forms, respectively). The noncitizens subject to prosecution argued that the fraudulent social-security information entered on the tax-withholding forms was the same as that entered on the I-9, and that the tax-withholding forms were part of the same employment-verification process for which the I-9 was used. They maintained that the text, purpose and structure of IRCA therefore preempted Kansas from prosecuting them under its identity-theft law.

Preemption doctrine is based on the Supremacy Clause of Article VI of the Constitution, which allows federal law to supersede and invalidate state laws when federal law and policy regulate the same subject matter. Doctrinally, the key to preemption is congressional intent. Congress might make its preemptive intent express, by enacting explicit terms clarifying that only federal policy will govern. Alternatively, in the absence of express provisions, Congress’s preemptive intent might be implied. In implied preemption analysis, courts look to the structure of federal law as a whole and other factors to determine if Congress intended for exclusive federal control. State law can be impliedly preempted when it conflicts with federal law, when it presents an obstacle to the accomplishment of federal goals, or when the federal regulatory scheme is so comprehensive as to leave no room for concurrent state regulation.

The Kansas Supreme Court, by a vote of 5-2, found the state prosecutions preempted by IRCA. Four justices held that Section 1324a(b)(5) was an “effective express preemption provision” that prevented application of Kansas’ identity- and information-theft statutes to the petitioners. Because it was engaged in express preemption analysis, the majority declined to apply any “presumption against preemption.” A one-justice concurring opinion concluded that IRCA impliedly, instead of expressly, preempted the state identity-theft statute as applied to noncitizens seeking employment. Indeed, the concurring opinion suggested that the majority’s description of Section 1324a(b)(5) as an “effective” express preemption provision essentially boiled down to an implied preemption approach. Two justices dissented, voting to uphold the prosecutions and cautioning that the ruling would undermine state authority to apply generally applicable state laws to all people in the state.

Before the U.S. Supreme Court, Kansas, supported by a coalition of like-minded states and the federal government writing as amici, attacks the potential breadth of the Kansas Supreme Court’s preemption rationale. The state argues that information contained in the I-9 – for example, the applicant’s name – might also entered on a variety of forms for several types of benefits. Kansas contends that preempting application of state laws based on Section 1324a(b)(5) therefore would create blanket immunity for noncitizens from prosecution under state identity-theft statutes. In addition, the state reasons that although IRCA might cover the field of employment verification, the state laws at issue deal with identity theft and fraud. Thus, IRCA cannot occupy the field inhabited by the state laws used to prosecute the petitioners.

The noncitizen respondents begin with the express preemption rationale offered by the majority below, arguing that the social-security-card information entered on the tax forms was “information contained in, or appended to” the I-9. Based on this reading of Section 1324a(b)(5), and supported by adjacent IRCA provisions and federal law that restrict the use of employment-verification information, they maintain that social security numbers on the tax forms cannot be used for purposes beyond those identified in federal law, namely for enforcement of IRCA or the enumerated federal crimes. Importantly, the respondents also fully engage the implied preemption rationale for invalidating Kansas’ prosecutions. This argument, amplified in an amicus brief filed by immigration law professors as well as one filed by various immigrants’ rights organizations, maintains that IRCA creates a comprehensive scheme for regulating unauthorized employment, and that Congress vested only one sovereign – the federal government – with discretion over enforcement of penalties related to unauthorized employment.

As a limitation on preemptive scope, the respondents urge that IRCA only preempts the application of state identity-theft laws to the employment-authorization and procurement process. Thus, in response to Kansas’ claim that preemption would nullify its identity-fraud laws as applied to noncitizens, the respondents contend that the state could still prosecute noncitizens who use stolen identity information to obtain a benefit outside the work-authorization context, such as a loan or credit card.

Critical to the outcome of the case will likely be the justices’ view of the Supreme Court’s last major immigration federalism case, Arizona v. United States, decided in 2012 with Justices Anthony Kennedy and Antonin Scalia writing the majority opinion and a partial dissent, respectively. The Arizona decision, which struck down several provisions of S.B. 1070, the state’s omnibus immigration-enforcement statute, looms large in Garcia for three reasons.

First, one of the state-law provisions enjoined in that case sought to criminalize work solicitation by unauthorized immigrants. The court found that section conflict-preempted, reasoning that Congress’ purpose in enacting IRCA was to focus criminal sanctions on employers who hired unauthorized employees, not on unauthorized employees seeking employment. Second, in enjoining S.B. 1070’s state alien-registration requirements, the Arizona court found that Congress’s enactment of a federal registration scheme had occupied the field of alien registration. The majority noted that it did not matter that the state was pursuing the same goal as the federal government; what mattered was that the state’s intervention intruded into a registration system designed by Congress to be enforced by the federal government exclusively. Kansas attempts to minimize the import of these holdings, arguing that here, the federal government has been supportive of state identity-theft prosecutions and that IRCA does not have the same preemptive scope as the alien-registrations scheme.

Third, Arizona places in sharp relief the drastic shift in the federal government’s position on IRCA’s preemptive scope. As the respondents note, the United States’ current argument against preemption in Garcia directly contradicts the position taken by the U.S. Department of Justice in Arizona, in which its brief claimed that IRCA left no room for states to impose criminal penalties on noncitizens seeking unauthorized employment. Indeed, even more recently than Arizona, the federal government doubled down on its pro-preemption stance in a 2016 case in the U.S. Court of Appeals for the 9th Circuit concerning application of Arizona’s identity-theft statute to noncitizens seeking employment. In Puente, Arizona v. Arpaio, the United States as an amicus again urged a broad understanding of IRCA’s reach, arguing for invalidation of a state identity-theft statute to the extent that the state law regulated fraud in the work-authorization process. Depending on the weight the Supreme Court accords the solicitor general’s views on IRCA’s preemptive capacity, this about-face from Arizona to Garcia might prove consequential.

The outcome in Garcia could have significant repercussions for state identity-theft prosecutions and beyond. A ruling for Kansas might portend increased involvement by states keen on enhancing immigration enforcement, by allowing them to use existing identity-theft and fraud laws – or to enact new ones – to target noncitizens. A ruling for Kansas might also lead to increased coordination between immigration authorities and state prosecutors, allowing the federal government to amplify immigration enforcement without spending additional federal funds.

The breadth of the court’s preemption analysis could implicate other immigration federalism cases, as well. Foremost among those are the several lawsuits concerning sanctuary or noncooperation policies enacted by states and localities, some of which turn on how to interpret Congress’s preemptive intent in the Immigration and Nationality Act, and whether preemption in the immigration context works differently than in other regulatory areas.

And finally, outside of immigration law, the Supreme Court’s analytic approach might clarify or modify aspects of the preemption doctrine more generally. The court’s opinion may elucidate how to differentiate express and implied preemption cases, which interpretative tools should govern in each instance, and how broadly to apply field and obstacle preemption.