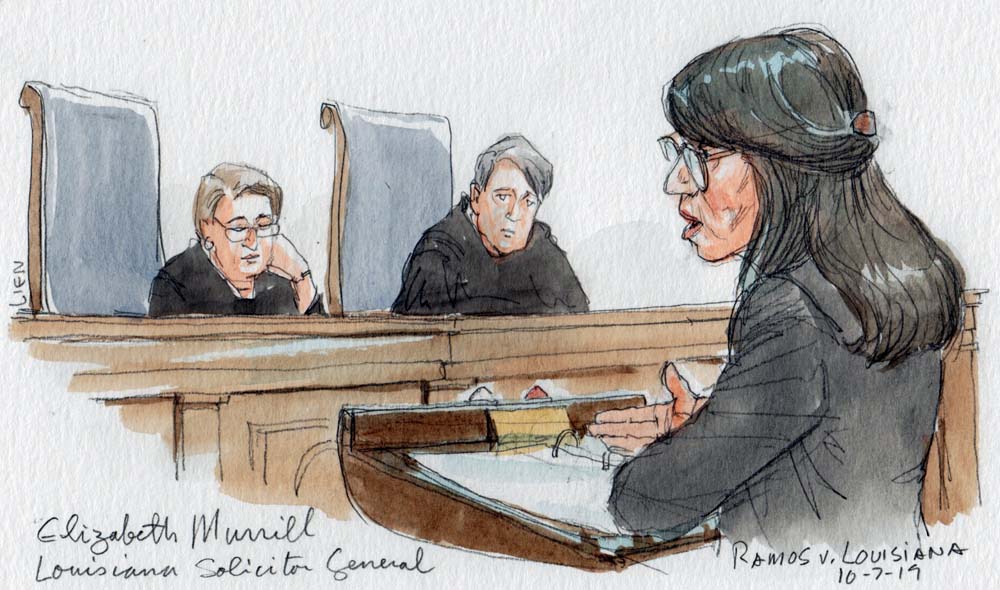 Last year Louisiana repealed a state law that allowed a criminal defendant (except in capital cases) to be convicted without a unanimous verdict from the jury. But the change only applied to crimes committed on or after January 1, 2019. So this afternoon the Supreme Court heard oral argument in a challenge to the constitutionality of Louisiana’s non-unanimity rule filed by an inmate who was convicted of a 2014 murder. In recent years, the Supreme Court has turned down similar challenges, but both the court’s decision to take up this appeal and today’s oral argument suggest that the justices may be ready to strike down the non-unanimity rule, which is still in use in Oregon, once and for all. But complicating the debate over the non-unanimity rule is a broader ongoing dispute over the importance of adhering to precedent, especially as controversial issues like abortion rights arrive at the court.

The inmate, Evangelisto Ramos, has maintained that he was not responsible for the stabbing death of Trinece Fedison, whose body was found in a trash can in New Orleans. However, after 10 of the 12 jurors on Ramos’ jury voted to convict him, Ramos was sentenced to life in prison at hard labor, and a state appeals court upheld his sentence. The Supreme Court agreed to weigh in on his case last spring.

The Sixth Amendment to the Constitution establishes the right to an “impartial jury.” However, when they were originally enacted, the first 10 amendments to the Constitution (collectively known as the Bill of Rights) were interpreted as applying only to the federal government, not to the states. Over time, the Supreme Court ruled that some (and eventually most) of the Bill of Rights also applies to the states – a doctrine known as “incorporation” – through the 14th Amendment to the Constitution, which bars states from depriving anyone of “life, liberty, or property, without due process of law.” And earlier this year, the justices ruled unanimously that the Eighth Amendment’s ban on excessive fines applies to the states through the 14th Amendment. 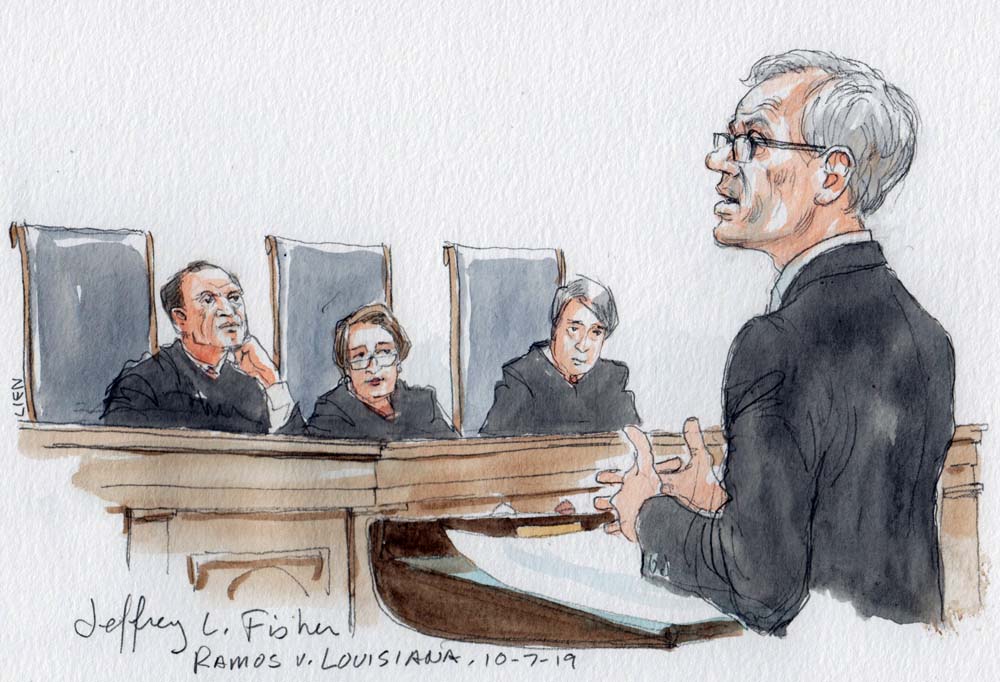 Arguing for Ramos today, attorney Jeffrey Fisher emphasized that Louisiana was not defending Powell’s vote in Apodaca. The state’s failure to stand by that vote makes sense, Fisher suggested, because the vote “flouted precedent at the time” and is now merely an “isolated relic of abandoned doctrine.” Instead, Fisher noted, the state has resorted to arguing that the Sixth Amendment doesn’t require a unanimous jury verdict at all.

Fisher quickly ran into a series of questions about the importance of stare decisis, the doctrine of adhering to precedent unless there is a good reason to depart from it. Justice Samuel Alito was the first justice to raise the issue, telling Fisher that Ramos was “asking us to overrule Apodaca.” “And last term,” Alito added, “the majority was lectured pretty sternly” in some cases about overruling the court’s prior cases. Observing that the extent to which one side has relied on an earlier decision is an important factor in deciding whether to overturn that decision, Alito suggested that Louisiana and Oregon had relied on Apodaca “in thousands of cases” – a far greater reliance, his question seemed to indicate, than in some of last term’s cases in which the justices overruled a precedent.

Justice Elena Kagan pushed back against Fisher’s argument that the court could overrule Apodaca because the trend toward incorporating the Bill of Rights leaves the decision as “an abandoned relic of past jurisprudence.” “We tolerate a pretty significant degree of diversity in state criminal procedure,” Kagan said. Perhaps, she continued, this is not the kind of anomaly that should concern the justices very much.

Justice Ruth Bader Ginsburg echoed Kagan’s thoughts. In its decision last term in the excessive-fines case, Ginsburg stressed, the Supreme Court specifically recognized that the Sixth Amendment “was the one exception to complete incorporation.”

Fisher also fielded questions about whether a ruling for Ramos would open the floodgates in both Louisiana and Oregon, prompting inmates to challenge convictions that became final long ago. Alito asked, “Will I see you up here in a term or two arguing that this is a watershed rule of criminal procedure that applies retroactively?”

Other justices tried to reconcile Ramos’ proposed rule with the Supreme Court’s 1970 ruling allowing six-person juries. If only six minds need to agree to convict, Ginsburg asked, why shouldn’t 10 be enough?

Fisher responded that the purpose underlying a unanimous jury rule involved not the number of jurors voting to convict, but the degree of unanimity, and the extent to which requiring unanimity promotes effective deliberation and ensures that a defendant is convicted by a cross-section of the community. Chief Justice John Roberts was unconvinced. “I’m not sure that’s self-apparent,” Roberts responded.

Fisher may have faced tough questions, but Elizabeth Murrill, Louisiana’s solicitor general, had an even harder time during her half hour at the lectern. Murrill acknowledged that if the Sixth Amendment does indeed require a unanimous jury, so that the only question before the court is whether the right to a unanimous jury applies to the states, Louisiana’s prospects are “concededly not very good” after last term’s ruling that the Eighth Amendment’s excessive fines clause applies to the states.

Murrill got into hot water when, responding a question from Ginsburg about whether the state was asking the court to take up a question that it had already answered in Apodaca, Murrill suggested that Powell’s decision in Apodaca was not clear, and that the court had “rejected” unanimity back in 1972. But, Kagan and Justice Brett Kavanaugh countered, the extent to which the state might have relied on a ruling that the Constitution does not require unanimous juries is most relevant for purposes of stare decisis, and Apodaca only stands for that principle if you include Powell’s opinion.

Kavanaugh also suggested that there were practical reasons to overrule Apodaca. He first cited the unfairness to defendants who were convicted and potentially sentenced to life without a unanimous jury verdict. He also reiterated that the non-unanimity rule is rooted in racism and a desire to diminish the voices of black jurors. Why, he asked Murrill, aren’t those two things enough?

Similarly, while some justices had focused on what they viewed as the negative effects that might flow from a ruling for Ramos, other justices suggested that the effects of a ruling for the state could be equally, if not more, pernicious. Justice Sonia Sotomayor told Murrill that she was talking about a “parade of horribles if we rule against you,” but “what if we rule for you?” Would other bedrocks of the jury trial that have long been taken as a given, like the requirement of having a jury made up of a fair cross-section of the community or the requirement that the jury find guilt beyond a reasonable doubt, also be open to attack?

And Justice Neil Gorsuch took on the state’s argument that the convictions of as many as 32,000 defendants could be called into question if the court ruled for Ramos. “One might wonder,” Gorsuch posited, “whether we should worry about their interests under the Sixth Amendment as well.” And in any event, Gorsuch added, he was skeptical about whether the court should “ensconce” an erroneous view of the Sixth Amendment in perpetuity simply because of 32,000 convictions in Louisiana.

During his rebuttal, Fisher tried to assuage the concerns of the justices who may have harbored more concerns than Gorsuch did about the effect of a ruling for Ramos. There are only 36 cases on direct review involving the question presented in this case, he told the justices, assuring them that they can postpone questions about whether their ruling would apply retroactively to inmates whose convictions had already become final. Moreover, this case is “different than an ordinary stare decisis case” because the court’s splintered ruling in Apodaca was so unusual; it was “almost a universe of one.” Fisher seemed to have at least five votes, and possibly more, in his corner, but we’ll know more sometime later this term.