The Supreme Court heard oral argument this morning in a dispute over the validity of appointments to a board created by Congress to bring financial stability back to Puerto Rico. With billions of dollars potentially at stake, the courtroom was packed with spectators, many of whom had flown in from Puerto Rico. And although the justices had been asked to resolve questions involving the interpretation of the Constitution and the applicability of an ancient remedy known as the “de facto officer” doctrine, the outcome of the case could hinge on a relatively simple question – whether, as seemed likely, a majority of the justices believe that the board’s duties are primarily local in nature. 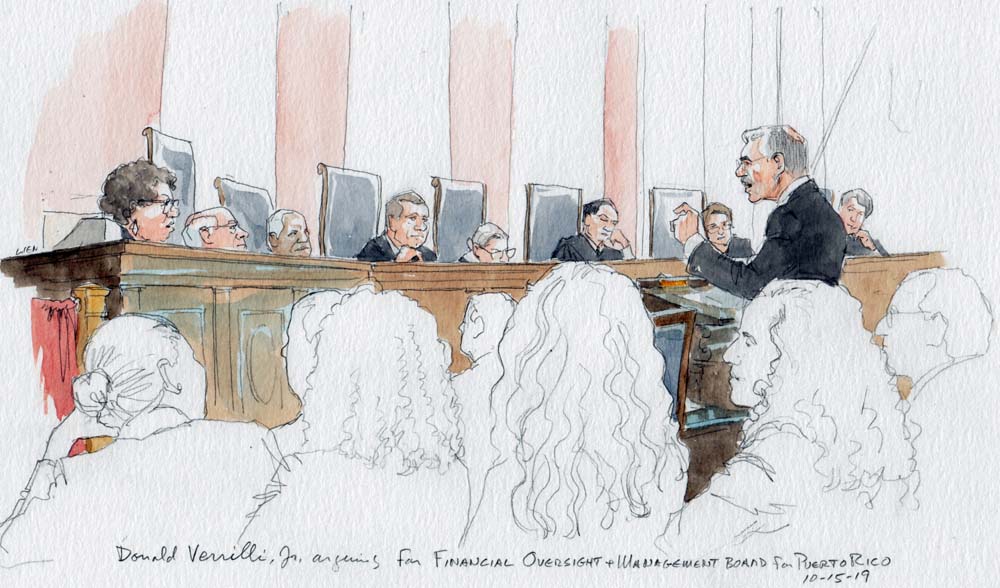 Donald B. Verrilli, Jr. arguing for Financial Oversight and Management Board for Puerto Rico (Art Lien)

In 2016, Congress passed the Puerto Rico Oversight, Management, and Economic Stability Act (PROMESA). Among other things, PROMESA created a Financial Oversight and Management Board to make various reforms to bring financial stability back to Puerto Rico, including by restructuring the island’s massive – over $70 billion – debt. The board is made up of seven voting members. Six are selected from a list compiled by members of Congress and do not require Senate confirmation; the president has discretion to select the seventh.

After the board began proceedings in federal court to restructure the debt, Aurelius Investment – a hedge fund that had invested in distressed Puerto Rico bonds – and a local labor union challenged the method by which the board’s members had been appointed. Under the Constitution’s appointments clause, although the president nominates principal “Officers of the United States,” the Senate must also confirm them. The U.S. Court of Appeals for the 1st Circuit agreed with Aurelius and the union that the board members were “Officers of the United States” who should have been nominated by the president and confirmed by the Senate. But the court of appeals declined to invalidate all the actions that the board had already taken. Relying on the “de facto officer” doctrine, which blesses an official’s actions even when his appointment is later discovered to have been invalid, the court of appeals allowed those actions to stand because of the problems that reversing them might create. The Supreme Court agreed in June to review the 1st Circuit’s decision.

Arguing on behalf of the board, Donald Verrilli urged the justices to focus on the nature of the board’s authority. PROMESA, he stressed, sets up an entity that operates within the territorial government, and the board acts on behalf of Puerto Rico.

Justice Elena Kagan pressed Verrilli to look at the fuller picture. Wasn’t Congress, she asked, thinking about the broader interests of the United States, where many investors on the mainland also held part of Puerto Rico’s debt, rather than just Puerto Rico when it passed PROMESA? Congress could have gone with a bailout of Puerto Rico, Kagan suggested, but opted not to because a bail-out would have been more expensive for the United States overall.

Verrilli insisted that the justices should “look at the best evidence of what Congress did”: It “told this board to act for Puerto Rico.”

But that response from Verrilli elicited a question that Chief Justice John Roberts would repeat several times throughout the 80 minutes of oral argument: “What if,” Roberts queried, “we don’t think it’s all or nothing” – that is, the board’s activities are both territorial and also have a broader impact? 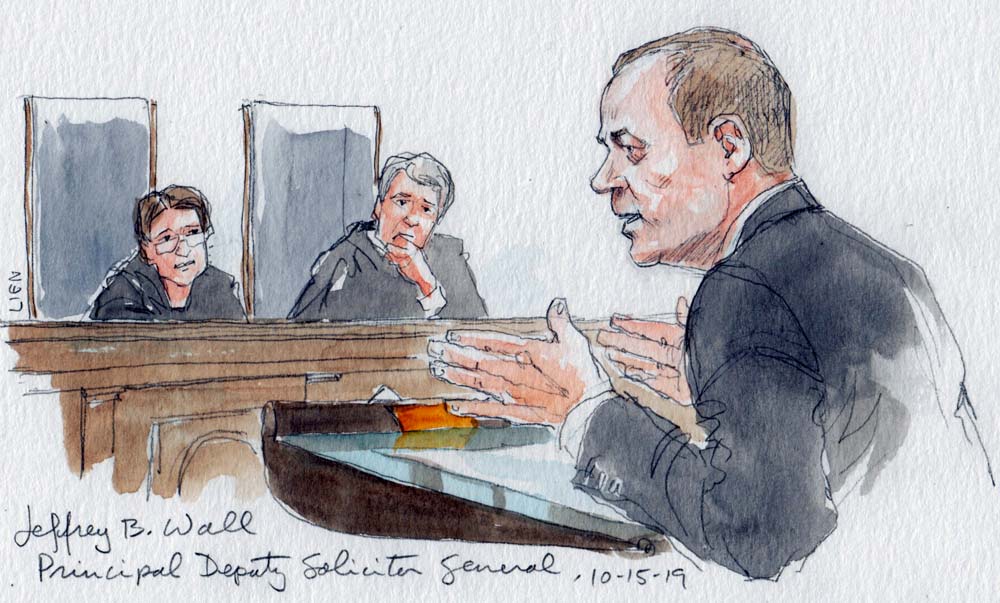 Appearing on behalf of the United States, Deputy Solicitor General Jeffrey Wall echoed Verrilli’s argument that the “hallmark” to determine whether the appointments clause applies “has always been ‘what kind of power are you exercising?’” And “everything that the board is doing,” he continued, “it’s doing in Puerto Rico.”

In response to questions from Justices Stephen Breyer and Sonia Sotomayor, Wall addressed what might happen if the court were to rule that the appointments to the board violated the appointments clause. “What difference would it make,” Breyer asked, if you still prevail on the “de facto officer” doctrine, so that the board’s past actions would still be valid?

Wall cautioned that even if the president appointed the same board members, the Senate would still need time to act, and he predicted that there would be other obstacles, such as challenges to the new board’s efforts to ratify the old board’s prior actions.

But his warnings about might happen if the court were to rule that the appointments violated the Constitution and the “de facto officer” doctrine does not apply were even more dire. I have “no idea how one unwinds this,” Wall said. If the board were shut down, he told the justices, it “imperils a process in which we have made really substantial gains in the past three years.” And more broadly, every test that the challengers have proposed would result in some set of territorial officers – such as judges in the District of Columbia – also being classified as federal officers.

Theodore Olson – who, like Verrilli, is a former U.S. solicitor general – argued on behalf of Aurelius. He portrayed the board as a very different kind of institution, reiterating that the insolvency of Puerto Rico is a “national issue.” Congress was dealing with a federal problem, he emphasized, and it came up with a federal solution – the board.

Olson faced skepticism from Justice Samuel Alito about his client’s motives for challenging the validity of the board members’ appointments. Noting that he might be “excessively cynical,” Alito asked Olson whether Olson and his client were “just here to defend the Constitution” or whether they in fact had a “concrete grievance.”

Olson shot back that his client was being subjected to a process governed by officials who were appointed in violation of the Constitution.

But Alito pressed on, wondering aloud whether “there is no money issue involved here?” Olson acknowledged the billions of dollars at stake in the debt restructuring, prompting Alito to quip that Olson’s client “wants more of it.”

Kagan suggested that the tests proposed by Aurelius, on the one hand, and the government and the board, on the other, might not be that different after all. If you can agree on a test, Kagan observed to Olson, that is “not a bad thing.”

After Olson again stressed that the board was acting “primarily nationally,” Sotomayor noted that the government and the board regard the board’s duties as local – dealing, for example, with the budget.

Olson pushed back, pointing the justices to PROMESA itself. The insolvency of a U.S. territory is not a local matter, he declared. Congress wanted to avoid a “fiscal catastrophe” and a “humanitarian crisis.”

But Justice Brett Kavanaugh appeared unconvinced. “If we conclude that the board’s powers are primarily local,” he asked, “do you lose?”

Arguing on behalf of a labor union that represents employees of Puerto Rico’s electric utility, lawyer Jessica Mendez-Colberg pleaded with the justices to overrule the Insular Cases, a group of Supreme Court cases dating back to the early 20th century that allow Americans in U.S. territories to be treated differently. Referring to the words on the front of the Supreme Court building, she contended that “Equal Justice Under Law should mean the same thing here as in Puerto Rico.”

The justices mostly allowed Mendez-Colberg to speak without interruption. Only Roberts spoke up, telling her that he thought “the argument was whether the appointments clause” applies to the board. “I just don’t see the pertinence” of the Insular Cases to this issue, he concluded.

In his rebuttal, Verrilli contended that the challengers had filed this lawsuit “because they want a new board.” If the board members’ appointments are deemed invalid, he continued, the challengers will fight ratification of the board’s prior decisions “tooth and nail” for “years and years.” But, he made clear, there is no need to reach the issue of a remedy for a violation of the appointments clause at all. And although predicting the outcome of a case based on the oral argument is always hazardous, it seemed likely after this morning’s argument that there are at least five justices who agree with Verrilli. A decision is expected sometime next year.