Symposium: Supreme Court not ready to give president carte blanche over immigration 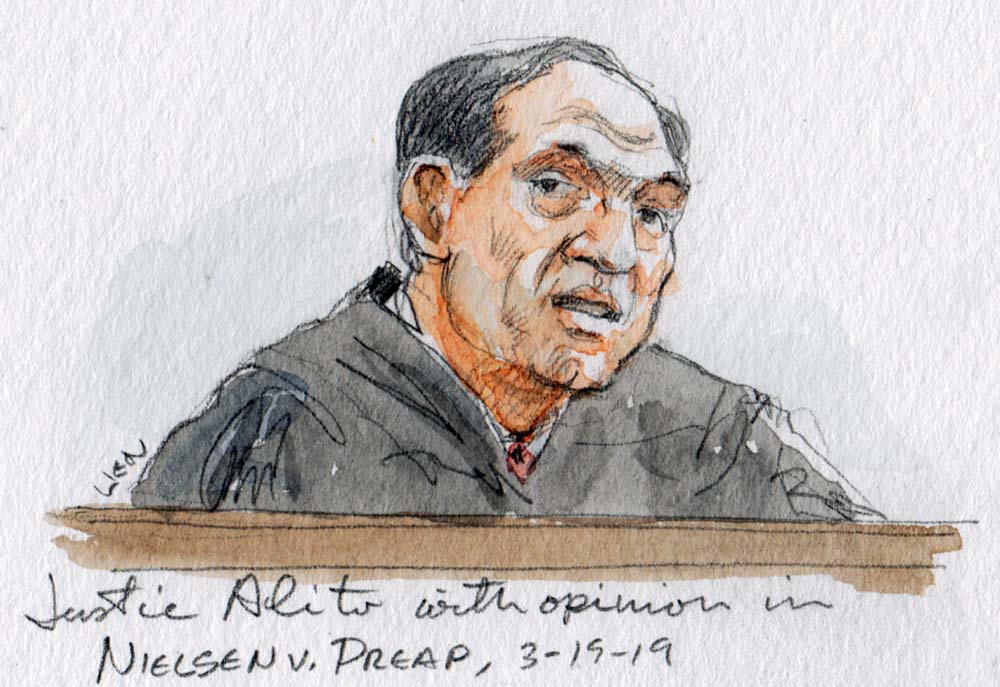 In its first term after Justice Anthony Kennedy’s departure, the Supreme Court did not reveal much about how the post-Kennedy lineup will address immigration issues. The major merits case on immigration, Nielsen v. Preap, was a bad sign for common-sense interpretation of acts of Congress, but said nothing new about core constitutional issues relating to immigration.

Preap marked the third time in three consecutive terms that the court took up the interpretation of 8 U.S.C. §1226(c), sometimes called a mandatory immigration detention statute because it permits the jailing of individuals in removal proceedings (mostly longtime lawful permanent residents) without a custody hearing on whether the individual poses a danger or flight risk. By a 5-4 vote, the Supreme Court reversed the U.S. Court of Appeals for the 9th Circuit’s interpretation of the statute. Preap holds that the statute’s command that immigration officers “shall take into custody any alien who—[is removable under one of four enumerated criminal categories] when the alien is released” does not require the government to initiate detention “when the alien is released” from criminal custody. As a result, the government can detain such people without any hearing on flight risk or dangerousness, even when they are taken into custody years or decades after finishing a criminal sentence and have a demonstrated record of law-abiding and stable residence in the community.

The Preap case can be viewed as a test for members of the Supreme Court who purport to enforce the plain, common-sense meaning of the words Congress chooses. Indeed, after the oral argument in October, some media commentators suggested that Preap marked the replacement of “Kennedy briefs,” built on “florid encomia to freedom,” with the “Gorsuch brief,” aimed at that justice’s focus on the text of statutes and the Constitution.

So much for that. In Preap, Justice Neil Gorsuch joined the majority to hold that “anyone who fits … [the] description [of one of the four enumerated criminal removability grounds] falls under [the statute]’s detention mandate—even if (as with respondents) the Secretary [of Homeland Security] did not arrest them immediately ‘when’ they were ‘released.’” In effect, the Supreme Court read the word “when” right out of the statute. “[B]etter … late than never,” Justice Samuel Alito writes, in a section of the opinion joined only by Chief Justice John Roberts and Justice Brett Kavanaugh. And finally, after parsing the words of the statute for 25 pages, the majority opines that the language is not even ambiguous, in order to reject the suggestion that the constitutional-avoidance doctrine requires reading the statute to avoid the serious due process problems that arise from detaining people who pose no danger or risk of flight.

Alito’s majority opinion is notable, however, for what it does not do. Unlike Justices Clarence Thomas and Gorsuch, who would have held that the federal courts have no jurisdiction even to review the lawfulness of detention of noncitizens defending against removal, Alito’s opinion for the court rejects the jurisdiction and justiciability obstacles to the court’s consideration of the case. Thus, a solid majority of the court is unwilling to accept the notion that the judiciary should leave it to the executive branch to impose immigration detention as it sees fit.

And, as Kennedy’s successor, Kavanaugh, points out in his brief concurring opinion, Preap was not about whether Congress may provide for detention of noncitizens defending against removal, or how long that detention may last, or whether such detention can be mandatory. As Kavanaugh goes on to emphasize, Preap presented no constitutional question.

And so October Term 2018’s biggest immigration case leaves for another day the question whether the mandatory immigration detention statute, as interpreted in the government’s favor in Preap and the previous term’s Jennings v. Rodriguez, violates the Fifth Amendment’s due process clause. The last (and only) time the Supreme Court considered the constitutionality of 8 U.S.C. §1226(c), in 2003 in Demore v. Kim, Kennedy voted with the majority to uphold the application of mandatory detention for a “brief” period. In that case, the person was likely to be removed within a short period of time and the government submitted data showing that the average length of detention was “brief” — data that, the government later confessed, contained significant errors. Preap sheds no new light on whether the current court will uphold 8 U.S.C. §1226(c) as it has now been expanded through government practice and the court’s recent interpretations. And so, immigration remains the only arena in which the Supreme Court has permitted civil detention without any individualized hearing.

Beyond OT 2018’s immigration merits cases, the court brought President Donald Trump up short on his policies relating to immigration and nationality in two notable instances. First, in Trump v. East Bay Sanctuary Covenant, over the objection of Thomas, Alito, Gorsuch and Kavanaugh, the Supreme Court rejected the Trump administration’s motion to stay a district-court order enjoining the president’s proclamation under 8 U.S.C. §1182(f) that would have barred entry (and denied asylum) to anyone who entered via the U.S.-Mexico border other than through ports of entry.

And in the term-closing case Department of Commerce v. New York, the chief justice wrote a majority opinion affirming a district-court order rejecting Commerce Secretary Wilbur Ross’ addition of a citizenship question to the 2020 decennial census. Although the census case did not concern a question of immigration law, Ross’ decision would have foreseeably resulted in a substantial undercount of communities with significant immigrant populations. And, while the case was pending at the Supreme Court, new evidence came to light showing that the rationale for adding the question, which Roberts eventually dismissed as “contrived,” was first drafted by a Republican political strategist who predicted it would aid “Republicans and non-Hispanic Whites.” Informed readers of the chief justice’s majority opinion and Breyer’s concurring opinion have speculated, based on the structure and tone of both opinions, that the chief justice changed his mind late in the game, and that Breyer’s draft dissent quickly was converted into a concurrence.

We may never know for sure what happened in conference in the census case. But what we do know is that twice this term, a bare majority of the Supreme Court rejected the president’s controversial and divisive policy touching on immigration and nationality. Both these matters, East Bay Sanctuary Covenant and Department of Commerce, answer an urgent question that the court left hanging after its dismal decision on Trump’s Muslim ban in the previous term in Trump v. Hawaii: The Supreme Court is not ready to give the president carte blanche in immigration-related matters.