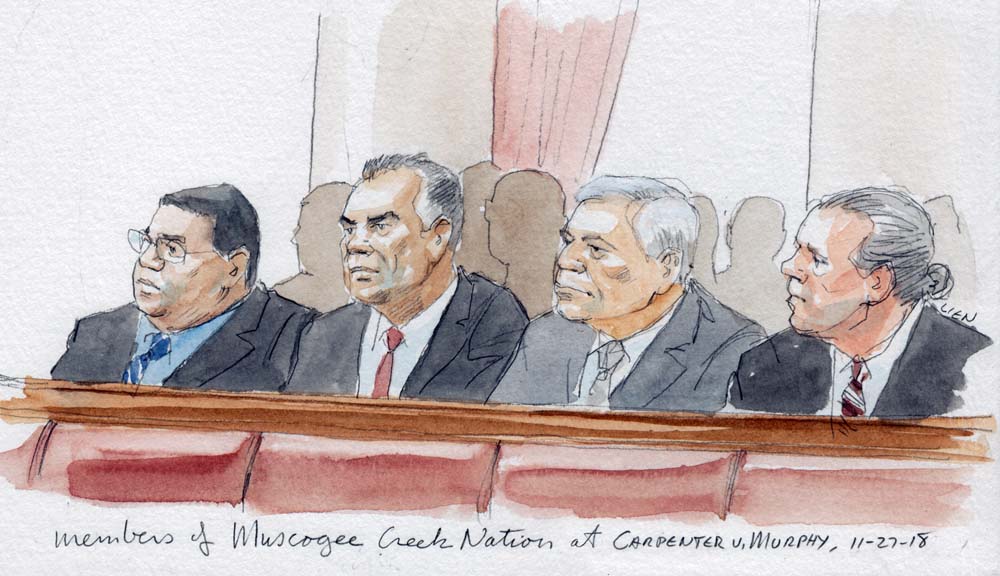 Members of Muscogee Creek Nation in the courtroom for argument in Carpenter v. Murphy.
Share

As the dust finally settles from last Thursday’s decisions in Department of Commerce v. New York and Rucho v. Common Cause, we can take a moment to notice the single hardest case of the term – the one case that the justices could not decide. Despite hearing oral argument all the way back in late November, and receiving a round of supplemental briefing by January, the justices left for the summer without offering a resolution of Carpenter v. Murphy. Rather, we are left with a bare notation that the case has been “restored to the calendar for reargument.”

This case, in which Justice Neil Gorsuch is recused, forces the justices to seek a narrow path between two obstacles. As summarized in my prior posts, the case involves the question whether Oklahoma has jurisdiction to prosecute major crimes that Native Americans commit on the territory that was set aside in the 19th century as a reservation for the Five Civilized Tribes – land that covers the eastern half of Oklahoma, including the city of Tulsa.

On the one hand, the state argues that a decision in favor of the defendant, Patrick Murphy, would leave a prosecutorial void over an immense area, threatening the validity of a large number of past convictions and forcing a wholesale development of new institutions for prosecutions by federal and Native American authorities. On the other hand, a ruling for the state could require the justices to replace a settled “clear-statement” regime for the disestablishment of Native American reservations with a multi-factored arrangement in which authority over the land might have passed from the tribes to the state at an undefined date based on a loose amalgam of historical practice.

The justices’ desire to avoid either of those outcomes was apparent in their December request for supplemental briefing, which asked the parties to explore whether any statute might authorize Oklahoma prosecutions even if the land remained a reservation. The decision to set the case for reargument suggests that nothing in those briefs afforded any simple way to avoid that conundrum.