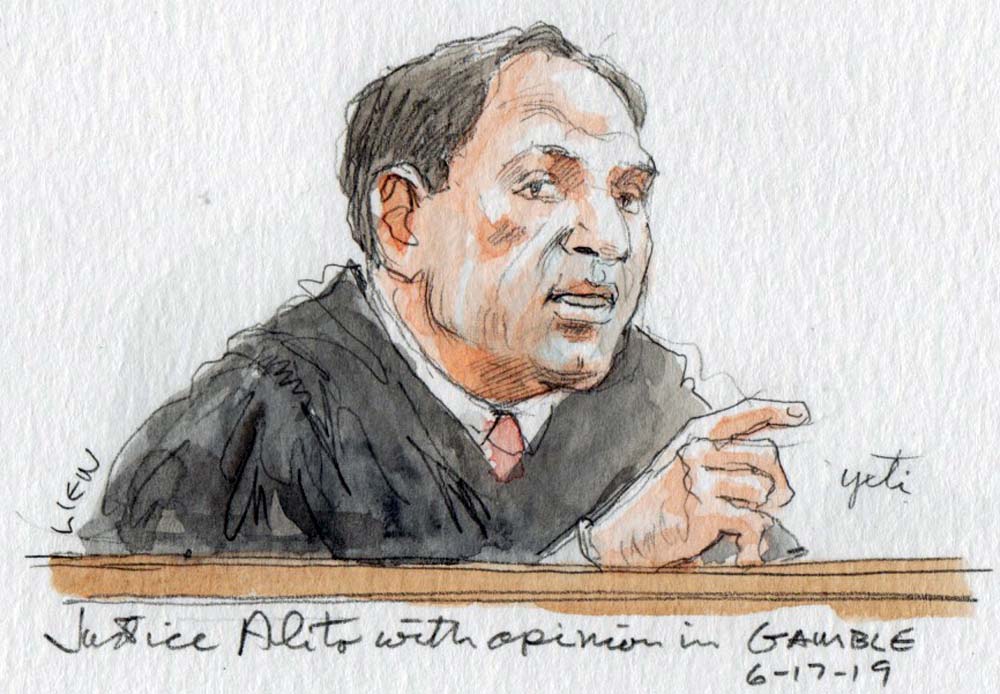 The Constitution’s double jeopardy clause guarantees that no one shall “be twice put in jeopardy” “for the same offence.” Today the Supreme Court upheld a longstanding interpretation of that clause, known as the “separate sovereigns” doctrine. By a vote of 7-2, the justices rejected a challenge to the doctrine by an Alabama man who argued that he could not be prosecuted for both federal and state gun charges arising from the same traffic stop. 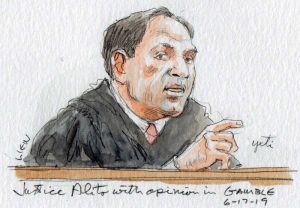 The case now before the court began in 2015, when Terance Gamble was pulled over by police for having a faulty headlight. The police officer smelled marijuana and searched Gamble’s car, where he found two bags of marijuana, a digital scale and a handgun.

Alabama charged Gamble with violating state drug laws; both the state and the federal government also charged him with being a felon in possession of a firearm. A state court in Alabama sentenced Gamble to one year in prison.

Gamble urged the federal trial court to throw out the charge against him, arguing that prosecuting him in federal court after the state had charged him would violate the double jeopardy clause. The trial court rejected his claim, explaining that it had to follow the separate sovereigns doctrine unless and until the Supreme Court overruled it. The trial court sentenced Gamble to nearly four years in federal prison, followed by a year of supervised release. The U.S. Court of Appeals for the 11th Circuit upheld the district court’s ruling and Gamble’s sentence. Gamble asked the Supreme Court to weigh in; the justices considered his case at 11 consecutive conferences before agreeing to do so.

Justice Samuel Alito wrote the majority opinion, which was joined by Chief Justice John Roberts and Justices Clarence Thomas, Stephen Breyer, Sonia Sotomayor, Elena Kagan and Brett Kavanaugh. Alito began by explaining that the “separate sovereigns” doctrine is not an exception to the double jeopardy clause at all, but instead is part and parcel of the clause itself because the clause bars successive prosecutions for the same offense – not for the same conduct. Offenses, Alito continued, are defined by laws, which are in turn defined by sovereigns. “So where there are two sovereigns,” Alito concluded, “there are two laws,” and therefore two offenses.

Alito emphasized that the Supreme Court has repeatedly reaffirmed this principle, for over 170 years. And it makes sense, Alito suggested, because different governments can have different interests. For example, he observed, if “only one sovereign may prosecute for a single act, no American court—state or federal—could prosecute conduct already tried in a foreign court,” even if the U.S. government lacked confidence in the foreign court or had different reasons for wanting to punish that conduct.

Gamble argued that the Supreme Court’s line of cases on the “separate sovereigns” doctrine conflicts with the understanding of the Founding Fathers who ratified the double jeopardy clause. But that argument, Alito countered, must overcome principles of stare decisis – the idea that courts should not overrule their earlier decisions unless there is a very good reason to do so. “This means,” Alito wrote, that Gamble would have to offer “something more than ambiguous historical evidence.” But Gamble cannot do so, Alito concluded after reviewing early cases and treatises in some detail, “much less do so with enough force to break of chain of precedent linking dozens of cases over 170 years.”

Thomas joined Alito’s opinion, but he filed his own concurring opinion that focused on what he described as the “proper role of stare decisis.” Thomas’ view appeared starkly different from the majority’s, as he explained that, “if the Court encounters a decision that is demonstrably erroneous—i.e., one that is not a permissible interpretation of the text—the Court should correct the error, regardless of whether other factors support overruling the precedent.” Perhaps with an eye toward upcoming battles over issues like abortion, Thomas lamented that “proponents of stare decisis tend to invoke it most fervently when the precedent at issue is least defensible,” and he lamented that the doctrine of stare decisis “has had a ‘rachet-like effect,’ cementing certain grievous departures from the law into the Court’s jurisprudence.”

Justices Ruth Bader Ginsburg and Neil Gorsuch each filed their own dissents from the court’s opinion. Ginsburg complained that the “division of authority between” the federal and state governments was intended to provide extra protection for the rights of the people, but that today’s decision takes advantage of that division to take away some of those rights. Adding that the “separate sovereigns” doctrine “has been subject to relentless criticism by members of the bench, bar, and academy,” she would reverse Gamble’s conviction.

Gorsuch made some of the same points as Ginsburg in his dissenting opinion, but he was significantly more critical of the majority’s opinion on stare decisis. Gorsuch acknowledged the need to “pay heed to the considered views of those who have come before us, especially in those cases,” but he emphasized that “stare decisis isn’t supposed to be the art of being methodically ignorant of what everyone knows.” “Indeed,” Gorsuch continued, “”blind obedience to stare decisis would leave this Court still abiding grotesque errors like” the Supreme Court’s 1857 decision holding that blacks were not citizens and could not bring a lawsuit in U.S. courts or its 1944 decision upholding the internment of Japanese-Americans during World War II.

Gorsuch closed his dissent by contending that when “governments may unleash all their might in multiple prosecutions against an individual, exhausting themselves only when those who hold the reins of power are content with the result, it is the poor and the weak, and the unpopular and controversial who suffer first—and there is nothing to stop them from being the last.”

Today’s decision leaves the “separate sovereigns” doctrine in place, but the effects of a ruling for Gamble could have been significant. As Justice Stephen Breyer noted at the oral argument last fall, a ruling that struck down the doctrine would have made it harder for the federal government to prosecute domestic violence among Indian tribes. And in the 1990s, federal prosecutors relied on the doctrine to try the Los Angeles police officers accused of beating motorist Rodney King on federal civil-rights charges after the officers were acquitted in state courts.

Gamble’s case also drew attention because of the effect that a ruling in his favor could have had if President Donald Trump pardons friends and administration officials who face federal charges. In March, Manhattan district attorney Cyrus Vance charged Paul Manafort, the president’s former campaign manager, with more than a dozen state felonies, including mortgage fraud. The charges came after Manafort had been sentenced in federal court to more than seven years in prison; the state charges are intended to ensure that Manafort would still face prison time even if Trump eventually pardons him for the federal crimes.