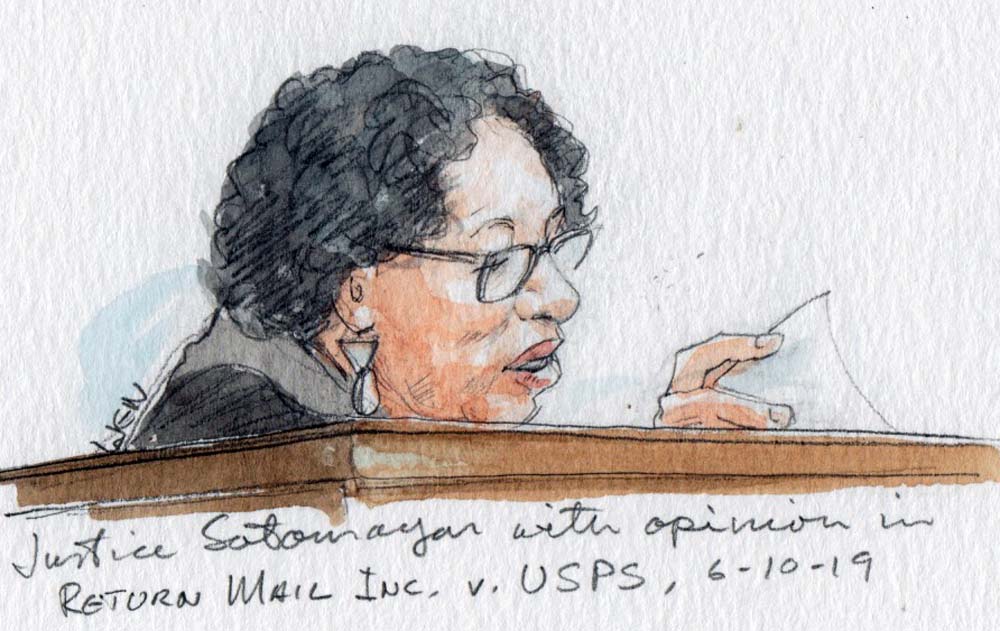 Yesterday’s decision in Return Mail Inc. v. U.S. Postal Service offers the justices’ answer to yet another of the drafting weaknesses of the 2011 patent-reform statute commonly known as the AIA (officially christened the Leahy-Smith America Invents Act). The issue in this one won’t keep anybody up at night with worry – or outrage – but the justices did decide it warranted their attention and now they’ve provided their answer.

The case involves three distinct provisions in the AIA that establish procedures for “post-grant review” of patents of various kinds. Those procedures permit any “person” to ask the Patent and Trademark Office to review previously issued patents and invalidate them if the PTO decides that it made a mistake when it issued those patents initially. This case, for example, involves a patent issued to petitioner Return Mail for an invention involving the use of bar codes to facilitate the processing of undeliverable mail. When Return Mail sued the U.S. Postal Service claiming that the postal service was infringing the Return Mail patent, the postal service invoked those procedures to challenge the patent. The issue in the case is whether the postal service (or other agencies of the federal government) is a “person” for purposes of the various AIA provisions that establish those post-grant review procedures. 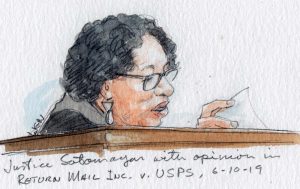 The patent statutes define a great many terms, but they do not define the term “person.” There is a statute, though, the so-called Dictionary Act, which provides that “person” includes natural individuals and businesses such as corporations and partnerships, but not governments, “unless the context indicates otherwise.” Writing for a majority of six, Justice Sonia Sotomayor explains that the Dictionary Act establishes a “presumption” rather than a “hard and fast rule of exclusion,” which should apply in the absence of “some affirmative showing of statutory intent to the contrary.” She then reviews four arguments the postal service offers as providing the requisite showing, but rejects each of them in turn.

First, Sotomayor considers the idea that the presumption is closely related to the presumption against waivers of sovereign immunity, under which courts do not read statutes that create a cause of action to extend to the federal government absent “unequivocal[]” evidence in the statute. Looking to that rule, the postal service argues that the presumption against extending the patent statutes to include federal agencies should not apply because this is not a case about sovereign immunity. Sotomayor, explains, though, that “[o]ur precedents teach otherwise,” citing several examples in which the Supreme Court routinely “has applied the presumption against treating the Government as a statutory person when there was no question of immunity,” even in cases that “would … exclude the Federal Government … from … a favorable procedural device.”

Second, the postal service points to other places in the patent statute where references to “persons” plainly include the federal government. Sotomayor acknowledges that “when Congress uses a word to mean one thing in one part of the statute, it will mean the same thing elsewhere in the statute,” but quotes an earlier decision holding that the principle “readily yields to context,” especially when a term is used with “distinct characters” in different parts of the same statute. For Sotomayor, “[t]hat is the case here,” because the patent statutes “refer to ‘person[s]’ in at least 18 different places, and there is no clear trend: Sometimes ‘person’ plainly includes the Government, sometimes it plainly excludes the Government, and sometimes—as here—it might be read either way.” Sotomayor canvasses those varying usages, which lead her to the view that:

The consistent-usage canon breaks down where Congress uses the same word in a statute in multiple conflicting ways. … In the face of such inconsistency, the mere existence of some Government-inclusive references cannot make the “affirmative showing” … required to overcome the presumption that Congress did not intend to include the Government.

Third, Sotomayor addresses the idea that the long history of government participation in the patent process supports the idea that the federal government should have access to the new post-grant review proceedings. Among other things, the federal government has had the explicit capacity since 1883 to apply for and hold patents, and for almost 40 years has had the right to participate in the procedure for ex parte re-examination on which post-grant review was modeled. Sotomayor finds the governmental role in those procedures irrelevant, noting that whatever the history regarding the other matters, “there is no longstanding practice” as to post-grant review, which “was enacted just eight years ago.”

Finally, Sotomayor turns to the postal service’s argument that it is “anomalous” to read the AIA “to deny it a benefit afforded to other infringers” – the ability to undermine a suit for patent infringement by challenging the validity of the asserted patent in post-grant review proceedings. For Sotomayor, there is “no oddity … in Congress’ affording nongovernmental actors an expedient route that the Government does not also enjoy for heading off potential infringement suits.” The key point for Sotomayor is that infringement suits against the government are not as onerous as those filed against private actors. Among other things, suits against the government are limited to actual damages. The plaintiff in those suits cannot seek injunctive relief to interfere with ongoing operations, and also cannot “demand a jury trial, or ask for punitive damages.” Not faced with “the threat of preliminary injunctive relief that could suddenly halt their use of a patented invention, … they enjoy a degree of certainty about … their potential liability that ordinary infringers do not.” In sum: “Because federal agencies face lower risks, it is reasonable for Congress to have treated them differently.”

The decision in this case will not shake either the patent bar or the world of patent litigation. As I noted in an earlier post, the government acknowledged during the oral argument that it has challenged patents in post-grant review proceedings less than two dozen times since adoption of the AIA. The justices may have concluded that even if the effect on the federal government is more significant than this number would suggest, the government is well placed to seek legislation amending the patent statutes to authorize the litigation strategies this case precludes.