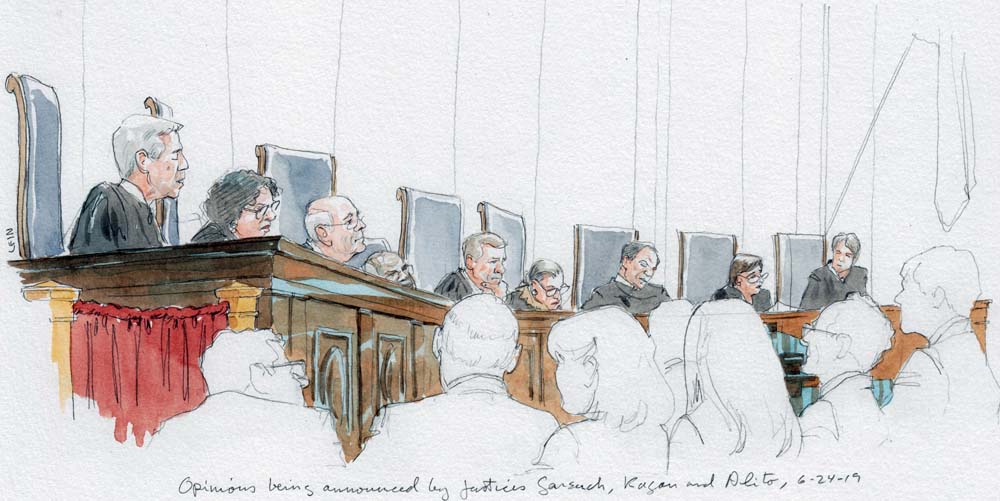 In Food Marketing Institute v. Argus Leader Media, the Supreme Court held today that the Freedom of Information Act allows a federal agency to withhold from disclosure records submitted by a private entity when the submitter keeps the records secret and the agency promises to keep the records from disclosure. In an opinion by Justice Neil Gorsuch for a six-justice majority that included the court’s other conservatives and Justice Elena Kagan, the court overruled the U.S. Court of Appeals for the 8th Circuit’s decision below, which was based on longstanding precedent from the U.S. Court of Appeals for the District of Columbia Circuit that had held sway among most of the other circuits. Focusing only on the relevant statutory language, the majority concluded that an agency and private submitter need only show that the records are kept “confidential,” in the court’s broad interpretation of the term, and not that disclosure would cause any harm to the private-sector submitter.

The case concerned a request by a South Dakota newspaper, the Argus Leader, for records that would disclose data about the U.S. Department of Agriculture’s Supplemental Nutrition Assistance Program, known as SNAP. That data included commercial information about the retail grocery stores at which SNAP recipients purchase their groceries. USDA and the grocers whose data had been captured in SNAP transactions claimed that the retailers’ individual market positions, which they keep secret from competitors and the general public, would be revealed by the information’s release. The 8th Circuit, affirming a district court decision, had held that the SNAP data was not exempt from FOIA because the grocers could not meet the prevailing Exemption 4 test first adopted by the D.C. Circuit in 1974 in National Parks & Conservation Association v. Morton. National Parks had held that Exemption 4 applied only to information whose disclosure is likely “(1) to impair the Government’s ability to obtain necessary information in the future; or (2) to cause substantial harm to the competitive position of the person from whom the information was obtained.” The grocers could show that they kept the data from the public and their competitors, and that USDA assured them it would keep the information private (as the United States stated in its amicus brief and during oral argument). But the grocers could not show a likelihood of substantial harm from the information’s disclosure.

After holding that the grocers had standing to sue because the injury they would suffer from disclosure would be fairly traceable to the decision that Exemption 4 does not apply and could therefore be redressed by a decision that it does, the Supreme Court held that the statutory language did not support the National Parks test. FOIA’s Exemption 4 applies to “commercial or financial information obtained from a person and privileged or confidential,” as stated in 5 U.S.C. § 552(b)(4). In interpreting the word “confidential,” Gorsuch focused solely on dictionary definitions from the time of FOIA’s original enactment, none of which considered harm from disclosure to be an aspect of the word’s meaning.

Instead, the contemporaneous understanding of “confidential” extended to information customarily kept private, and also included assurances given by the receiving party that it would keep privately disclosed information secret. This, the Supreme Court observed, had been the test in some circuit courts prior to National Parks. It will now be the authoritative test under Food Marketing Institute: Henceforth, a private-sector submitter of information to an agency will only need to show their efforts to keep the information private and the assurances they received from the agency that it would keep the information from the public. No longer will a submitter need to show any harm, whether substantial or negligible.

Joined by Justices Ruth Bader Ginsburg and Sonia Sotomayor, Justice Stephen Breyer’s partial dissent agreed with the majority that the statutory text could not support the substantial-competitive-injury test that National Parks had established. But the dissent disagreed with the majority’s decision to remove harm entirely from consideration under Exemption 4. Finding definitions of “confidential” in other contexts (including national security) in which disclosure’s consequences are deemed part of a confidential classification, the dissent would have required more than merely a process-related definition established by the direct parties to the provision and receipt of the information. The dissent worried that the new test would allow, and perhaps even incentivize, private entities and agencies to overstate their efforts to keep information private in contexts in which disclosure would not harm the submitter but would serve a public benefit. A more expansive exemption that does not even consider harm to the submitter, the dissent argued, runs counter to FOIA’s purpose of informing the public and enabling citizens to hold the government accountable for its decisions.

The decision is significant in two regards. First, it will broaden the reach of Exemption 4, making it easier for private records to be kept from disclosure. Food Marketing Institute will benefit businesses in regulated industries who are frequently asked or required to provide information to government agencies that is confidential but does not meet the definition of “trade secret” that federal courts apply to Exemption 4. But it will frustrate news media, watchdogs and competitors who will be less likely to have their FOIA requests met. Notably, the majority never explained that the Argus Leader submitted its FOIA request as part of its investigation into SNAP-related fraud. That investigation will now have to proceed without access to the SNAP data. The decision’s influence will vary among administrations and even among agencies within the same administration, depending on the extent to which agencies provide assurances that they will keep submitted records private. But it will narrow access to information the government holds.

The decision also offers a snapshot of statutory interpretation on the Roberts Court. Gorsuch’s decision began and ended with the statutory text. He interpreted the key term that the statute did not define solely by reference to contemporaneous dictionaries. He did not consider FOIA’s legislative history or Congress’ purpose in enacting it. Nor was he persuaded by the newspaper’s effort to argue for the relevance of common law definitions of “confidential” and of Congress’ implied ratification of National Parks in more recent FOIA amendments and in similar language Congress has incorporated into other statutory provisions. This approach is consistent with Kagan’s 2011 decision in Milner v. Department of Navy, which also overruled an influential and longstanding D.C. Circuit test for a FOIA exemption — although Milner, from which only Breyer dissented, included legislative purpose as a secondary justification. The Food Marketing Institute dissent argued that abandoning harm as a part of Exemption 4 runs counter to FOIA’s general purpose of requiring broad disclosure, and rejects prior statements in Supreme Court FOIA precedent prescribing narrow readings of the statute’s exemptions. The majority considered only the text. Justice Antonin Scalia might well have been pleased by what this decision says about the influence on the court’s interpretive practice of his textualist approach to statutory interpretation.