Academic highlight: Fallon on “Law and Legitimacy in the Supreme Court” 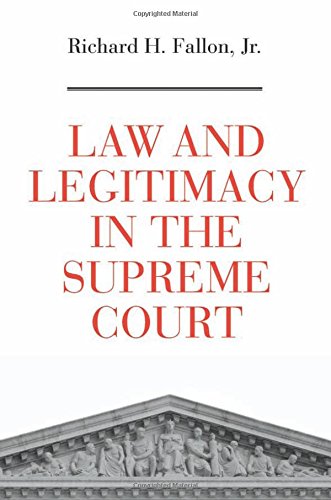 “By what moral right does the … Supreme Court establish controversial rules of law, some of which many people think are mistaken or even morally repugnant, and then enforce its dictates coercively?” This is the question at the heart of Professor Richard Fallon’s thoughtful and timely new book, “Law and Legitimacy in the Supreme Court.” Although Fallon has been exploring these issues for more than a decade, his book arrives at a moment when they are dominating discourse about the Supreme Court.

In recent years, the Supreme Court’s reputation has been battered by politics. In 2016, the Republican-controlled Senate refused to hold hearings for President Barack Obama’s nominee to fill a vacant seat on the bench, putting the court front and center in the 2016 presidential election. Justice Brett Kavanaugh’s confirmation hearing in 2018 was unusually contentious and partisan, in part because Kavanaugh was replacing “swing” Justice Anthony Kennedy. In the wake of these events, some scholars proposed radical structural reforms to the court’s composition in an effort to insulate it from electoral politics. Fallon’s book also explores methods to protect the court’s legitimacy, but he would do so through changes to the justices’ decision-making process that accommodate, rather than deny, the influence of politics.

As Fallon is quick to point out, a Supreme Court decision can be recognized as legitimate under all three strands even by someone who concludes that the court got it wrong. He also notes that a court or legal system can satisfy one strand of legitimacy even as it fails at others. For example, Nazi Germany’s legal system had sociological legitimacy even though it lacked any moral legitimacy. And, as Professor Tara Grove explained in a recent essay reviewing Fallon’s book, at times these different types of legitimacy are in tension, such as when a justice casts a vote she believes is legally incorrect to avoid issuing a decision that undermines the public’s respect for the court. (Some speculate that Chief Justice John Roberts did just that when he issued his surprising concurrence upholding the constitutionality of the Affordable Care Act.)

More often, however, the three types of legitimacy Fallon identifies are interconnected. For example, if the U.S. Supreme Court is issuing legally illegitimate decisions — that is, decisions that cannot be justified under legal doctrines and principles, but instead appear to be openly partisan or arbitrary — it may eventually lose its sociological legitimacy. Like many others, Fallon fears that the court is at risk of losing its legal and sociological legitimacy in an era of intense partisanship around judicial confirmations, leading to a court filled with justices who vote in line with the preferences of the party that appointed them. In Chapter 6 of his book, Fallon proposes a method of decision-making that he hopes will promote the court’s legal legitimacy, and in the process bolster its sociological and moral legitimacy as well.

Under a method of decision-making that he labels Reflective Equilibrium Theory, Fallon argues that the justices should approach each case with a “provisional commitment” to a particular interpretive method — whether it be originalism, living constitutionalism or some other flavor — and adhere to that methodology even when it requires that they reach results at odds with their ideological preferences. At the same time, the justices should abandon “rigidly algorithmic” application of theory when it would “yield intolerably unjust and practically disastrous outcomes.” He sees this as a middle ground between “excessive flaccidity and untenable rigidity” that will enable the court to protect its legal, sociological and moral legitimacy.

Happily, Fallon’s proposal transcends tired debates about which methods of constitutional interpretation produce the “best” results, and he acknowledges that a variety of interpretive methodologies and outcomes qualify as legitimate. In a refreshing admission, he also concedes that “political views will have an inescapable role” in judicial decision-making, and he thinks that we err in pretending otherwise. Instead, Fallon wisely argues for a conception of legitimate judicial decision-making in which we accept that law is influenced by political, practical, and moral considerations, even as we strive to ensure it is not dominated by them.