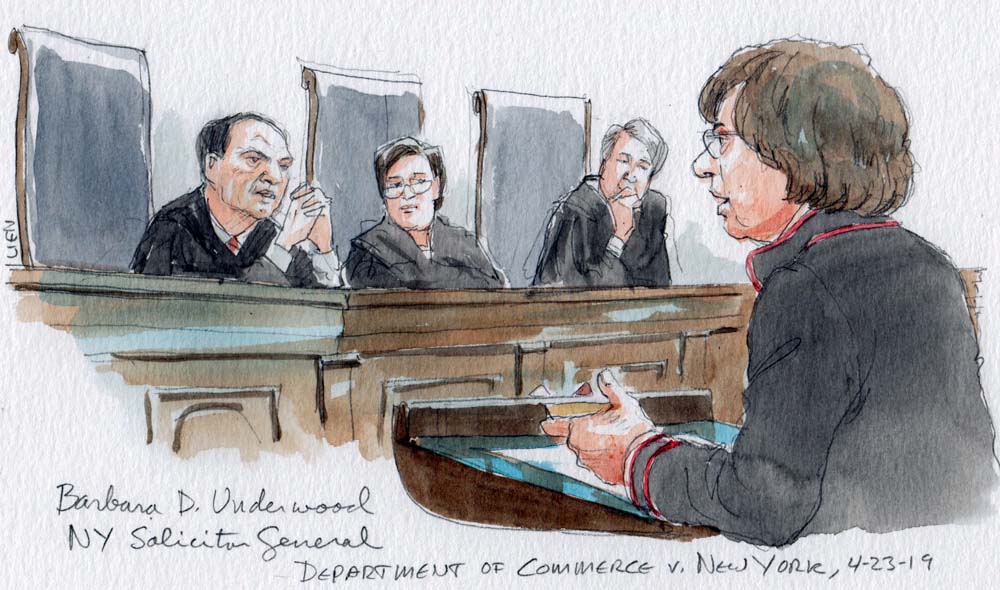 The Supreme Court heard oral argument this morning in the dispute over the Trump administration’s decision to include a question about citizenship on the 2020 census. The federal government says that the Department of Justice wants data about citizenship to better enforce federal voting rights laws. But the challengers in the case counter that asking about citizenship will lead to an inaccurate count, because households with undocumented or Hispanic residents may not respond. After roughly 80 minutes of often tense debate, the justices seemed divided along ideological lines, with the conservative justices appearing ready to uphold the use of the question.

Ross announced the decision to include the citizenship question last year. The question is not entirely new to the census: It was generally included on census forms from 1820 until 1950, while some households received forms that contained the question between 1960 and 2000.

But a group of state and local governments, along with several civil rights groups, went to federal court to challenge Ross’ decision. In January, the court ruled that the decision violated the federal law governing administrative agencies and barred the government from including the question on the upcoming census. The Supreme Court agreed to take up the case right away, without waiting for a federal appeals court to weigh in, to resolve the issue once and for all by June, when the government needs to start printing millions of census questionnaires.

Arguing for the federal government today, U.S. Solicitor General Noel Francisco began by stressing that the citizenship question has been asked on the census for nearly 200 years. But he was quickly interrupted by Justice Sonia Sotomayor, who pushed back. It hasn’t been included in the census sent to all households since 1950, she reminded Francisco, because every secretary of commerce and every statistician has recommended against asking it. 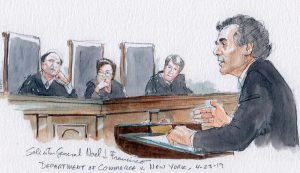 The other liberal justices then took turns with Sotomayor peppering Francisco with questions, often diving deep into the details of the case. Some justices focused on Ross’ decision to include the question even though the Census Bureau had told him that asking the question would lead to fewer responses and could make information about citizenship worse, rather than better.

Sotomayor was again skeptical, telling Francisco that the government’s rationale amounted to plucking out one sentence from the record and relying on it, while ignoring everything else that suggests that adding the question would reduce the accuracy of the data.

Justice Elena Kagan echoed Sotomayor’s concerns. The secretary of commerce can deviate from the Census Bureau’s experts, she conceded, but he needs a reason to do so. “I don’t see any reasons,” Kagan told Francisco. Instead, Kagan continued, it seemed more as though the Department of Justice’s need for the citizenship data was “contrived”; lots of civil rights officials at the Department of Justice, Kagan observed, have never asked for this data.

Arguing on behalf of the state and local governments challenging the decision to add the citizenship question, New York Solicitor General Barbara Underwood began by complaining that Ross had decided to add the citizenship question even though the documents on which he relied to make that decision contained strong evidence that doing so would lead to an inaccurate count. All the reasons that Ross has cited to justify adding the question, Underwood asserted, are false. 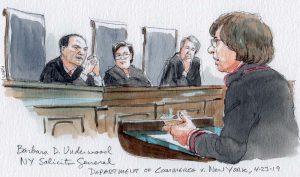 Justice Brett Kavanaugh noted that the United Nations recommends including a citizenship question. Not only has the United States often asked the question, Kavanaugh stressed, but other countries – including Spain, Germany, Mexico, Canada and Ireland – also ask about citizenship. Does this international and historical practice affect how we look at the decision to add the question? Kavanaugh queried.

Underwood responded that the information provided by the question is “very useful for a country to have.” But should it be included on the census, she countered, whose principal purpose is to count people, knowing that it will reduce response rates?

Justices Samuel Alito and Neil Gorsuch, however, pushed back against the idea that including the citizenship question, standing alone, was the root cause of a lower response rate. Citizens and noncitizens are different in a lot of ways other than whether they have citizenship, Alito observed: For example, there may be socioeconomic differences between a household with citizens and one with noncitizens, as well as language differences. So there may be other explanations, Alito suggested, for why households with noncitizens would be less likely to return their citizenship questionnaires. 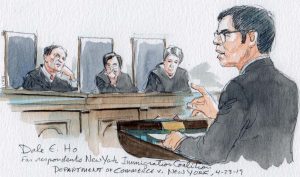 Gorsuch said the same thing a few minutes later to Dale Ho, who argued on behalf of the civil rights groups challenging the inclusion of the citizenship question. Some states, Gorsuch told Ho, argue that there are other explanations for the reduced response rates beyond the inclusion of the citizenship question on the surveys that have gone out to some households – for example, the questionnaires may be too long, and less affluent households may not have the time to fill them out completely. What do we do, Gorsuch asked, with the fact that we don’t know?

When General Counsel of the House of Representatives Douglas Letter, who appeared as a “friend of the court” in support of the challengers, stood up to argue, he provided one of the only light moments in an otherwise strained day. Letter began by conveying the thanks of House Speaker Nancy Pelosi for allowing him to appear and argue. Roberts shot back, “Tell her she’s welcome.”

Letter told the justices that anything that undermines the accuracy of the census count is a problem, even if the information is wanted for another reason – such as enforcing federal voting rights laws. But he didn’t seem to make much headway: Even Justice Ruth Bader Ginsburg, who seemed to be siding with the challengers for most of the case, noted that Congress had been made aware of the decision to include the citizenship question but hadn’t taken any action. Kavanaugh then chimed in, asking Letter why Congress didn’t prohibit the use of a question about citizenship on the census, the same way it had banned questions about religion. 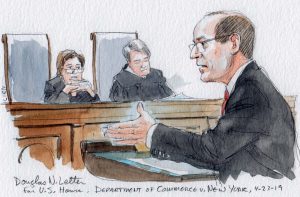 The stakes in the case are high. The federal government uses the data from the census to divide up the 435 members of the U.S. House of Representatives among the 50 states. After the 2010 census, for example, Texas gained four seats in the House and Florida gained four, while New York – the lead plaintiff in today’s case – and Ohio both lost two. Census data is also used to allocate federal funding for a wide variety of programs: In fiscal year 2016, the federal government distributed over $900 billion through such programs. The challengers say that, as a result, including the citizenship question could lead to fewer members of Congress and less federal funding for states with large populations of undocumented and Hispanic residents – many of which tend to skew Democratic.