A “view” from the courtroom: Counting to five 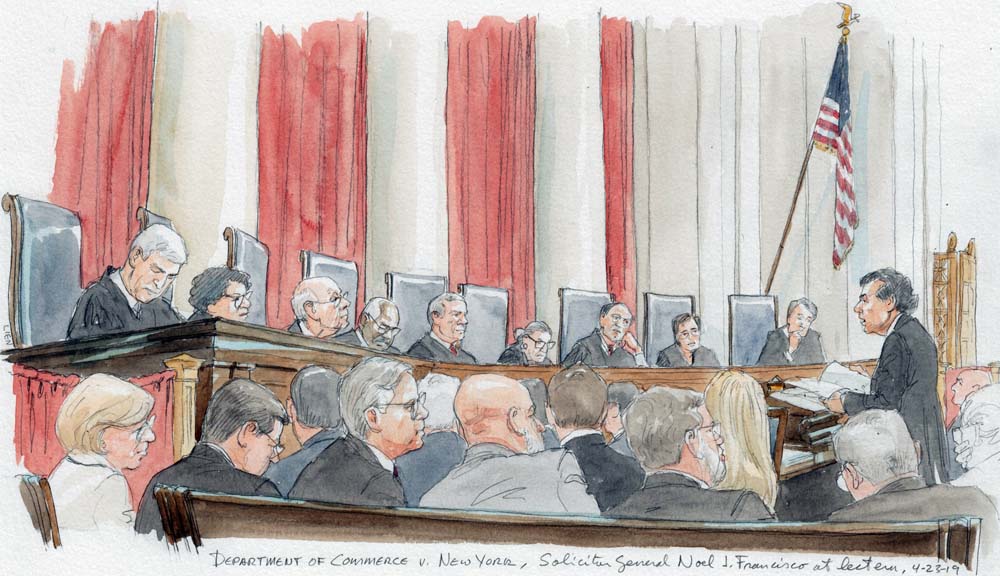 Today is the oral argument in one of the term’s biggest cases, Department of Commerce v. New York, about the Trump administration’s efforts to add a citizenship question to the 2020 census. It is also a rare day for afternoon arguments, and rarer still because there will be two of those. 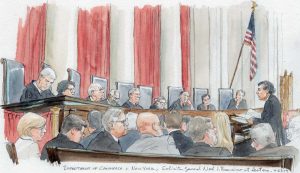 When the court squeezed the census case into its already announced April calendar, it made the wise decision to push the two cases that were originally set for this morning into the afternoon. Thus, after the 80-minute argument this morning, everyone gets a nice break before the court returns for Mitchell v. Wisconsin, about whether a state law authorizing a blood draw from an unconscious motorist requires a warrant; and Rehaif v. United States, about a “knowingly” provision of a federal firearm statute.

In honor of the census question, I have undertaken to conduct an “actual enumeration” of the population of the courtroom this morning. It’s not a simple task, because I am the only enumerator and I don’t have the benefit of distributing any census forms. In fact, I have to do the best I can from my seat in the press section. Just as with the actual count, there are comings and goings that complicate the task.

Let’s start with the bar section. My rough count is that 70 seats are filled, almost all those available, and that includes the four advocates who will argue the census case and their associates at the counsel tables. A few stragglers will be shown to seats in the bar section after the arguments begin, so I’ll set the total at 76.

There are a number of court personnel, including the marshal, the clerk, marshal’s aides, at least a couple of employees who make sure the sound and recording system are running smoothly, and a few others. These number about 12 people. There are an ample number of Supreme Court police officers, but for reasons of security I won’t specify how many.

Big cases like this one also draw a number of the justices’ law clerks. Because I can’t see how many are filling their alcoves on the south side of the courtroom, I’ll impute that there are at least 12 of them here this morning. The others are all back in chambers working on opinion drafts and planning the end-of-year skit, I’ll presume.

Then there is the public section of the courtroom, which includes numerous long benches, some side chairs and three alcoves filled with smaller chairs. My count is that some 200 people are in the public gallery.

Normally a case like this might draw several members of Congress and officials from the administration. Secretary of Commerce Wilbur Ross, whose actions pushing for the addition of the citizenship question are at the center of the case, is evidently not here. Later today, he will tweet a shoutout to a Census Bureau report of an increase in new residential sales for March.

However, John Gore, the principal deputy assistant attorney general, who figures prominently in the so-called administrative record of the case, is here.

Congress is in recess this week, which may account for the lack of spectators wearing House member pins. But Rep. Carolyn Maloney, D-N.Y., is here, and she will join New York state Attorney General Letitia James at the press microphones on the court’s plaza after the argument.

At 10 a.m., the census count in the courtroom increases by nine, as the justices take the bench.

I have saved my enumeration of the press section for last, because the court has indicated the possibility of opinions today. On such days, even when a big case is being argued, several reporters will remain in the press room to learn which opinion or opinions are being released. If it is something big, they may elect to skip the argument altogether. That won’t be necessary today, though, because Chief Justice John Roberts has just opinion to announce.

“In case 18-459, Emulex Corporation versus Varjabedian, the writ of certiorari is dismissed as improvidently granted,” Roberts says. He then turns to Clerk of the Court Scott Harris for routine bar admissions. Some seven or eight reporters who were downstairs quickly make their way up to the courtroom, and most roll their eyes as they take their seats. It’s a blessing that reporters don’t have to write about a big opinion on such a busy day for arguments. But it seems that a DIG like this one could have been announced on a different day.

(Perhaps, though, a more substantive opinion got pulled at the last minute. Later Tuesday, the court announces the possibility of opinions of Wednesday, which had not been announced as a possible opinion day after last Thursday’s conference.)

So with the press section now full, I count 70 reporters present. And the result of the enumeration of the entire courtroom is 397 people, with no inquiry as to whether they are U.S. citizens or not. This does not include the groups of a dozen or so spectators who shuffle in and out throughout the argument as part of the three-minute rotating line. I fully acknowledge the possibility, even the likelihood, of an undercount.

As to the argument itself, Amy Howe has the main account (and on such a tight deadline between the morning and afternoon arguments!).

The court’s liberal bloc will spar repeatedly with U.S. Solicitor General Noel Francisco over the commerce secretary’s push for the citizenship question.

Justice Elena Kagan, a former solicitor general herself, tells Francisco that “your briefs are extremely well done. … But a lot of your arguments just do not appear in the secretary’s decision memo. And the fact that SG lawyers can come up with 60 pages of explanation for a decision, that’s all post hoc rationalization.”

A short time later, Francisco says, “Your honor, I’m tempted to pocket the compliment and sit down, but I won’t do that.”

Two of the court’s conservatives, Kavanaugh and Justice Neil Gorsuch, ask about the long history of some use of a citizenship question, which was first asked on the 1820 census, as well as practices in other countries.

“What do we do with the history and the fact that this question” was on the main census form for “a long time,” Gorsuch asks.

Francisco makes the same point about the UN in his brief, which is more respect than the international organization usually gets from U.S. conservatives.

The three advocates who argue on behalf of the challengers—New York state Solicitor General Barbara Underwood (a former acting U.S. solicitor general under President Bill Clinton), Dale Ho of the American Civil Liberties Union, and Douglas Letter, representing the U.S. House of Representatives as an amicus, do so ably, but it is uncertain they make much headway with the court’s conservatives.

The most explosive exchange comes toward the end of argument, as Francisco takes to the lectern for his rebuttal.

He suggests that challengers’ positions on standing are “effectively empowering any group in the country to knock off any question on the census if they simply get together and boycott it.”

When Justice Sonia Sotomayor seeks to question him on this, he keeps speaking, as he did with some of her other questions earlier in the argument.

The chief justice, who has been perceived as annoyed by Sotomayor’s frequent questions during a lawyer’s rebuttal time, feels compelled to cut off Francisco by saying, “Justice Sotomayor.”

Not at all, Francisco says. It’s just that the challengers’ view could lead to groups feeling empowered to “knock off any question of the census that they found particularly objectionable.”

“We’re all done,” Roberts says breezily before adding the more traditional, “The case is submitted.”