A “view” from the courtroom: Back to the bench for Justice Ginsburg 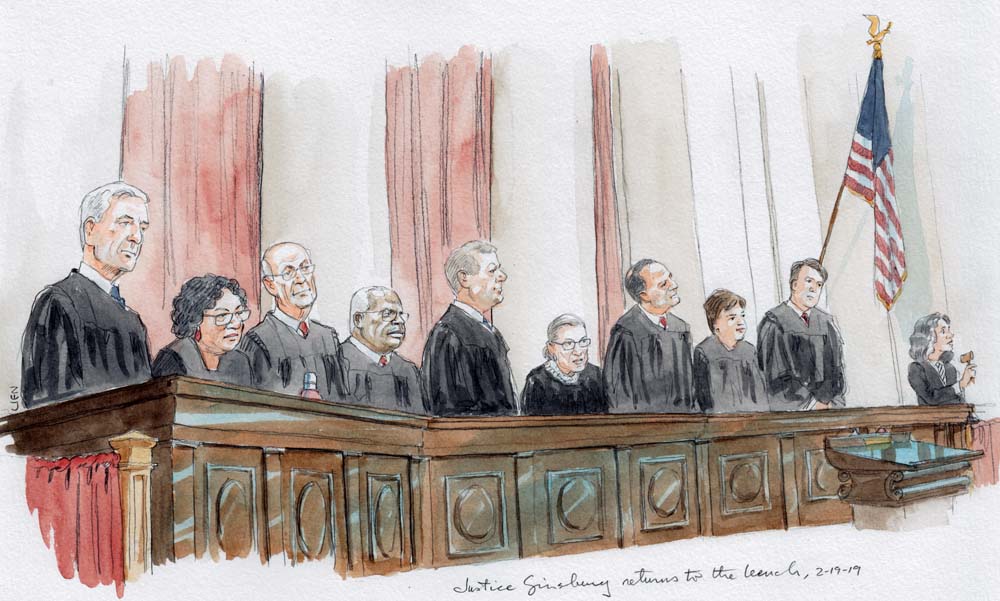 The court is returning to the bench this morning after its usual four-week winter recess. The recess, marked by noteworthy “shadow docket” actions on the death penalty, abortion rights and other matters, may have offered more news than the relatively sleepy February sitting.

Today, though, the press section is filling up, and it is not because there is a groundswell of interest in today’s lone case for argument – a thorny patent dispute between a private business and the U.S. Postal Service over an invention to aid the swift processing of undeliverable mail. 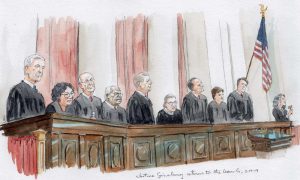 Justice Ruth Bader Ginsburg, who missed all 11 arguments of the January sitting because of her recuperation from lung surgery, is expected back on the bench. The 85-year-old justice returned to the court building Friday for the justices’ private conference. (And she will participate in the January cases, as Chief Justice John Roberts explained each day, by reading the briefs and transcripts.)

Today is also an important day in the entertainment world, as it is the deadline for the voting members of the Academy of Motion Picture Arts and Sciences to cast their Oscar ballots. One category listed on those ballots is Documentary (Feature), which includes “RBG” by Betsy West and Julie Cohen.

CNN, whose CNN Films unit was a producer of the film, reaired the documentary this past Sunday, in what perhaps was a well-timed effort to give Oscar voters another chance to view it. In the documentary feature category, which to the best of our knowledge isn’t being relegated to a commercial break during this Sunday’s Oscar telecast on ABC, “RBG” is going up against the slacker skateboarders of “Minding the Gap,” the struggles of a Muslim family in Syria in “Of Fathers and Sons,” the story of an adventurous mountain climber in “Free Solo,” and life in an African-American community in Alabama in “Hale County This Morning, This Evening.”

NPR’s Nina Totenberg relates that Ginsburg will not be traveling to Hollywood this weekend for Oscar festivities. (We had visions of the justice dashing from the ceremony, which ends about 9 p.m. Pacific time, to LAX to take a redeye flight back to Washington in time for next Monday’s argument.)

Totenberg, who appears as commentator in the film, is heading to California, and she will moderate a screening and discussion with West and Cohen on Saturday night in Los Angeles. For Sunday, Totenberg has snagged a ticket to the Oscar ceremony.

Back here in Washington, the courtroom is full as the justices take the bench at 10 a.m., and Ginsburg is indeed back in the saddle. She looks chipper as she takes her seat to the left of the chief justice, sipping from a silver “go-cup” coffee mug as Roberts welcomes several individuals and groups into the Supreme Court Bar. The chief justice makes no mention of Ginsburg’s return.

Today might have been more eventful, as the case of U.S. Department of Commerce v. U.S. District Court for the Southern District of New York was originally set for argument this morning. That case was part of the big dispute over whether a citizenship question may be added to the 2020 census. But the particular questions in that petition, including whether the challengers of the citizenship question could compel a deposition of U.S. Secretary of Commerce Wilbur Ross, were overtaken by events. Just last Friday, the court granted review in U.S. Department of Commerce v. New York, which will be argued in the April sitting and will address whether the district court erred in enjoining Ross’ decision to add the citizenship question.

So today, we are left with Return Mail Inc. v. U.S. Postal Service, which stems from the postal service’s efforts to invalidate a patent for a machine that scans and processes barcodes containing address information, which evidently greatly speeds up the handling of undeliverable mail.

The case gets technical pretty quickly, but it does present the provocative question of whether the federal government is a “person” who may petition to institute review proceedings in the U.S. Patent and Trademark Office under a 2011 federal statute, the Leahy-Smith America Invents Act.

Beth Brinkmann, representing Return Mail Inc., is barely into her argument when she is interrupted from the bench — by Ginsburg.

It’s a technical question, but in its very ordinariness, it suggests a return to normalcy. Ginsburg is frequently the first questioner at oral argument, and during the January sitting, the other members of the court spread the work around, with Justice Sonia Sotomayor asking the first question most often.

About two or three minutes into the argument, after Ginsburg has asked her first question, several reporters slip out of the press section and exit the courtroom. One begins to suspect that they were not all that interested in whether the government is a person under the relevant provisions of the America Invents Act.

Ginsburg, sitting straight up during the entire argument instead of bowing her head as she sometimes does, asks one more question of Brinkmann and a couple of questions of Deputy Solicitor General Malcolm Stewart, representing the Postal Service.

“What about Ms. Brinkmann’s linchpin that the estoppel provision—that the government effectively gets two bites of the apple; everybody else gets just one?” she demands of Stewart.

The argument has only a couple of light moments; as is usually the case, Ginsburg is not the source of them. Justice Samuel Alito asking Stewart at one point, “If we indulge the possible fiction that Congress actually gave a second of thought to the issue that’s before us …” The courtroom laughs as Alito continues to ask why Congress would have wanted to treat the government differently from a private party in proceedings under the 2011 statute.

Justice Elena Kagan presses Stewart about whether the federal government has “a home-court advantage” before a panel known as the Patent Trial and Review Board, and whether patent officials throughout the executive branch are a sort of “community … who talk to each other all the time.”

“I have been to [the U.S. Court of Appeals for] the Federal Circuit bench and bar conference,” Stewart says, “and there is a community thought of as the patent bar, and so there probably is some form of a professional acquaintance between the various types of governmental members.”

He makes that meeting sound almost as much fun as going to the Oscars.

When the argument ends, the justices file out as usual through three separate curtains. Ginsburg has been using the center curtain only since this term began, when her seat shifted after Justice Anthony Kennedy’s retirement.

After Roberts leads the way through the middle curtain, Justice Clarence Thomas, who sits on the chief justice’s right, pauses and lets Ginsburg make her way down the three short steps.

And then the marshal hits the buzzer that sounds throughout the building to indicate that the justices have left the courtroom.

Recommended Citation: Mark Walsh, A “view” from the courtroom: Back to the bench for Justice Ginsburg, SCOTUSblog (Feb. 19, 2019, 2:30 PM), https://www.scotusblog.com/2019/02/a-view-from-the-courtroom-back-to-the-bench-for-justice-ginsburg/