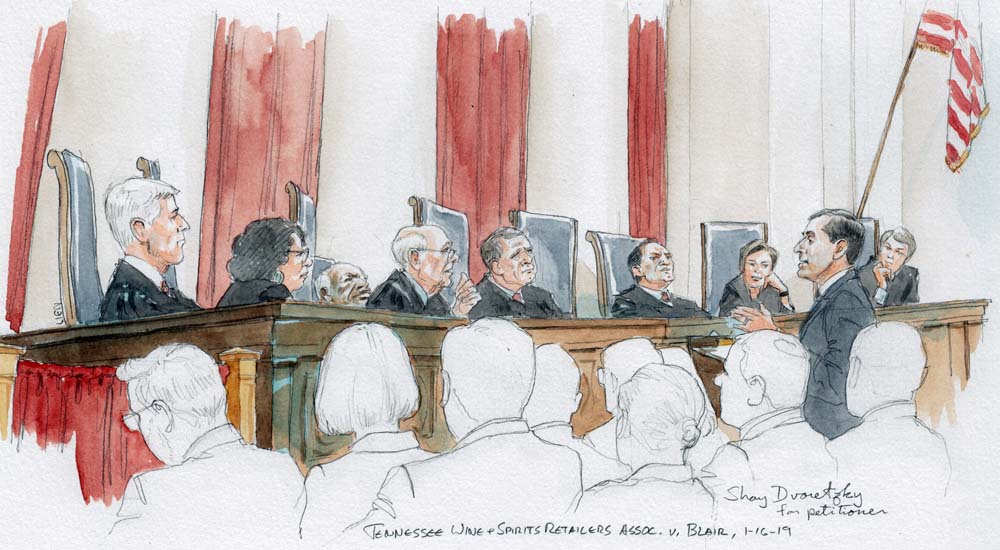 Ratified in 1933, the 21st Amendment ended Prohibition – which (fun fact!) was established by the 18th Amendment, ratified 100 years ago today. It also gave states broad power to regulate alcoholic beverages. At today’s oral argument in Tennessee Wine and Spirits Retailers Association v. Blair, the justices considered exactly how expansive that regulatory power is. In particular, does the 21st Amendment allow Tennessee to impose a two-year residency requirement for anyone who wants a retail license to sell alcohol there, or is the state’s power instead limited by a doctrine known as the dormant commerce clause, which bars states from discriminating against interstate commerce? The Supreme Court’s answer could have a significant impact on where Americans buy their alcohol and what kinds are available to them, but after an hour of oral argument it was hard to see exactly where the justices were headed in the case. 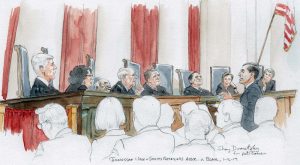 The dispute pits Tennessee Wine and Spirits Retailers Association, a trade association that has taken the lead in defending the Tennessee law, against both Total Wine, the national mega-chain with nearly 200 stores in 23 states, and Doug and Mary Ketchum, who moved to Tennessee to buy a liquor store after doctors told them that the weather in their home state of Utah was bad for their disabled daughter. When Total Wine and the Ketchums applied for licenses to run retail stores in Nashville and Memphis, respectively, the Tennessee Alcoholic Beverage Commission was poised to approve their applications, until the retailers – citing the residency requirement – threatened to sue the state.

The retailers’ threat prompted the TABC to go to federal court, seeking a ruling on whether the residency requirement is constitutional. The U.S. Court of Appeals for the 6th Circuit struck down the requirement, and the justices agreed last year to hear the case.

At this morning’s oral argument, there was general agreement that, if Total Wine and the Ketchums wanted to sell something else – for example, milk or paint – Tennessee’s residency requirement would be unconstitutional, because it violates the dormant commerce clause by discriminating against out-of-state residents. The question before the court, then, was whether the 21st Amendment “saves” laws like Tennessee’s.

Representing the retailers defending the residency requirement, attorney Shay Dvoretzky told the justices that it does. The 21st Amendment, Dvoretzky argued, was intended to give back the powers that the states had had before Prohibition under two federal laws – the Wilson Act and the Webb-Kenyon Act – that gave them “near complete” power to regulate the distribution of liquor. States can do almost anything, Dvoretzky stressed, as long as they treat in-state and out-of-state products the same, which the residency requirement does.

This expansive power, Dvoretzky made clear in responding to a question from Justice Sonia Sotomayor, means that laws like Tennessee’s residency requirement do not violate the Constitution even if they are intended to protect in-state retailers from competition. There is no “economic protectionism” exception to the 21st Amendment, Dvoretzky emphasized.

Dvoretzky later repeated this idea in response to a question from Justice Samuel Alito, who asked him whether the state could impose a requirement that the grandparents of an applicant for a liquor license have lived in Tennessee. Dvoretzky responded that such a requirement “would not create a dormant Commerce Clause problem.” Before Prohibition, Dvoretzky said, the states’ powers included the power to discriminate against out-of-state interests.

Justice Brett Kavanaugh was skeptical. The problem I’m having, Kavanaugh said to Dvoretzky, is that nothing in the text of the 21st Amendment – which bars the “transportation or importation” of liquor into a state in violation of that state’s laws – gives the states complete authority over the distribution of liquor. All that the 21st Amendment was intended to do, Kavanaugh suggested, was let states remain “dry” if they opted to do so; it wasn’t intended to allow states to pass laws that discriminate against out-of-state interests.

Arguing as a “friend of the court” supporting the retailers, Illinois Solicitor General David Franklin represented 34 states and the District of Columbia. Franklin told the justices that the twin questions of who can sell alcohol and on what terms have always been at the heart of the 21st Amendment.

Justice Elena Kagan appeared unconvinced that states have complete latitude to regulate those questions, observing that Tennessee’s residency requirement seems to be an outlier. “Is there anything in your argument,” she asked Franklin, “that would give us a way to say that” these kinds of extreme examples are “clearly protectionist” and must be struck down, even if more reasonable residency requirements might survive?

Franklin pushed back, responding that although Tennessee’s residency requirements could potentially violate other parts of the Constitution, they do not violate the dormant commerce clause. That prompted Kagan to ask whether a better option for the court would be for it to rule that the dormant commerce clause does apply to the residency requirement, at which point the state could come back and demonstrate that it has “real health and safety concerns” that justify the laws.

Franklin resisted, telling Kagan that such an approach would “still embroil the courts in the kind of line drawing that the 21st Amendment was designed to relieve them of” and would “be at odds with the broad regulatory discretion” that the 21st Amendment gives the states. The argument that Total Wine and the Ketchums are making, Franklin emphasized, would strip all meaning from the 21st Amendment by treating alcohol the same as any other commodity. “But it’s not,” Franklin concluded.

Appearing on behalf of Total Wine and the Ketchums, lawyer Carter Phillips reiterated Kavanaugh’s suggestion (later echoed by Alito) that the 21st Amendment does not give states broad authority to regulate alcohol but instead was intended to allow states that had decided to remain “dry” to stop the importation of alcohol from other states.

Justice Stephen Breyer countered that the Supreme Court’s earlier cases had already recognized that the 21st Amendment gives states “virtually complete control” over how they want to structure their liquor-distribution systems. What’s more, Breyer added, most states have long had some sort of residency requirement. “The history favors the other side,” Breyer told Phillips, even if it doesn’t necessarily make sense.

Kagan and Justice Neil Gorsuch fretted aloud about the prospect that a ruling for Total Wine and the Ketchums would open the doors to new challenges – for example, to other state laws regulating the sale and distribution of liquor. If we rule for you, Gorsuch told Phillips, the next case will argue that the current system discriminates against out-of-state residents by requiring retailers to have a physical presence in the state. Isn’t the next business model, Gorsuch continued, just to operate as the Amazon of liquor?

Phillips demurred, noting that Total Wine is a brick-and-mortar retailer. In any event, he responded, if such cases come to fruition, the states can make different arguments about why liquor retailers need to have an in-state presence. But in this case, he emphasized, Tennessee has never tried to explain why its residency requirements are necessary.

This is a hard case to handicap: Justice Ruth Bader Ginsburg was absent, Chief Justice John Roberts said very little, and Justice Clarence Thomas did not say anything at all. Throw in the fact that Tennessee has made only a half-hearted attempt to defend the residency requirements, and it becomes even more difficult to predict exactly what the justices are likely to do. A decision in the case is expected by summer.