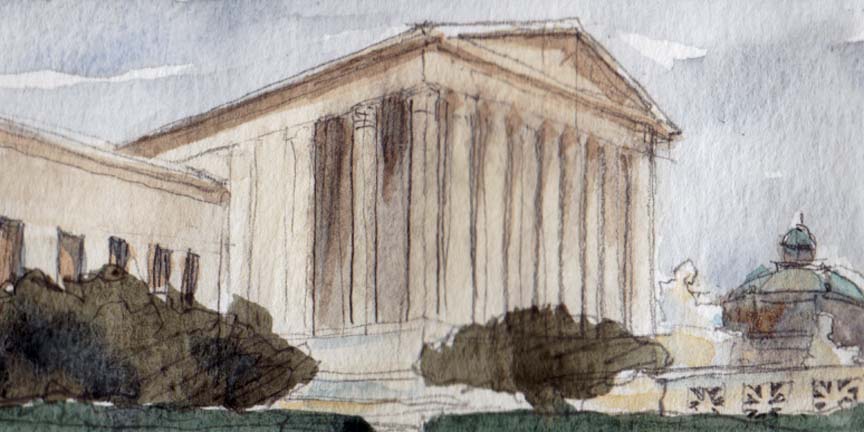 Yesterday the justices issued orders from last week’s conference, granting no new cases and taking no action on several high-profile cert petitions. Amy Howe covers the order list for this blog, in a post first published at Howe on the Court. At Bloomberg, Greg Stohr reports that the justices “rejected appeals from Sherwin-Williams Co. and Conagra Brands Inc., leaving intact a ruling that requires [the companies] to pay more than $400 million for lead-paint remediation in California.” Additional coverage comes from David Savage for the Los Angeles Times, who reports that “[b]usiness lawyers said they fear the decision will give a green light to other suits seeking to hold manufacturers liable for damage inflicted on the public, including the opioid crisis and climate change.”

In an op-ed for Forbes, Richard Samp writes that in Nielsen v. Preap, which involves the immigration law’s mandatory detention provision, last week’s “oral argument left little doubt about the likely outcome: Chief Justice Roberts, Justice Thomas, Justice Alito, Justice Gorsuch, and Justice Kavanaugh will vote to overturn the U.S. Court of Appeals for the Ninth Circuit’s constricted interpretation of the government’s detention authority.” At SCOTUS OA, Tonja Jacobi and Matthew Sag agree with this prediction, noting that their “empirical analysis of the Preap oral argument suggests that Kavanaugh will be loyal to the Republicans”; they go on to observe that “[c]onsidering all four cases the Court heard in Kavanaugh’s first week on the Bench, the newest justice may not be ideologically moderate, but so far he has been moderate in his behavior, in some senses.”