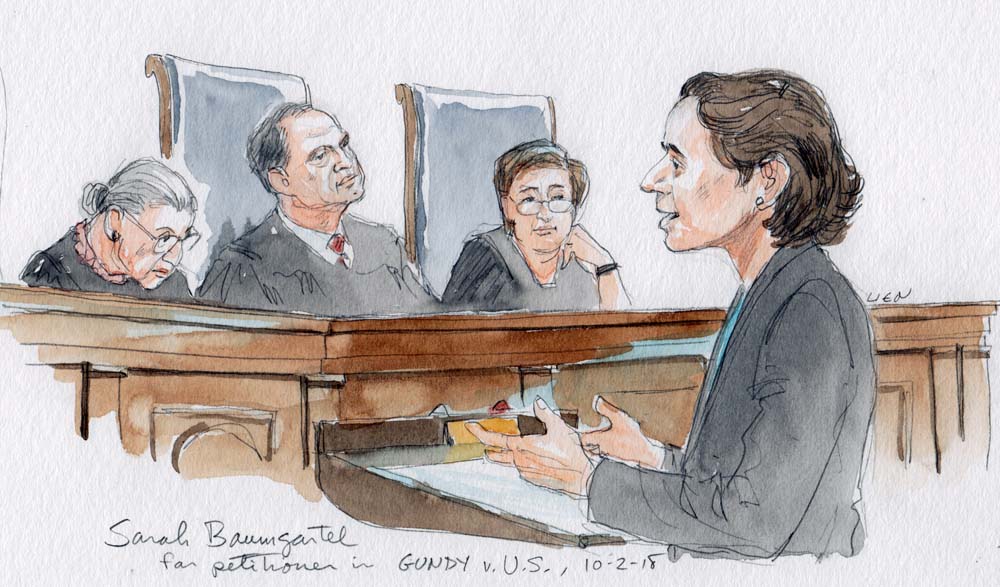 At Tuesday’s oral argument in Gundy v. United States, the justices took up an important case involving the nondelegation doctrine — the rule that Congress cannot transfer its power to legislate to another branch of government without specifying an “intelligible principle” to guide its delegate. The question before the Supreme Court was whether the Sex Offender Registration and Notification Act violates the nondelegation doctrine by conferring on the U.S. attorney general the authority to “specify the applicability” of SORNA’s registration requirement to “sex offenders convicted before” the date of SORNA’s enactment. Both sides faced a hot bench.

Sarah Baumgartel, representing Herman Gundy, took the podium first. She began by stressing that SORNA contains “no standard to guide the Attorney General’s discretion” in determining whether to apply the registration requirement to pre-SORNA offenders. 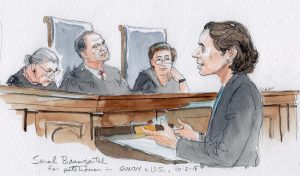 The justices responded with a flurry of questions that mainly fell into two buckets. First, can other provisions of SORNA be treated as supplying the requisite congressional guidance — for example, the provision that mentions Congress’ purpose of establishing a “comprehensive national system” and “protect[ing] the public”? If so, then the attorney general’s discretion is less than the “plenary” authority that Gundy asserts he or she possesses. Justice Elena Kagan pressed this line of argument most energetically, and Justice Sonia Sotomayor seemed to find it congenial, too, adding that reading the statute to supply a limiting principle would aid the court in avoiding a constitutional question.

Second, what distinguishes the delegation in SORNA from other delegations that the court has upheld? The fact that the delegate here is the attorney general evidently concerned Justice Neil Gorsuch, who commented that he had “trouble thinking of another delegation in which this Court has ever allowed the chief prosecutor of the United States to write the criminal law for those he’s going to prosecute.” Chief Justice John Roberts seemed more skeptical that SORNA was troublingly unique, urging Baumgartel to articulate the difference between SORNA’s delegation and a hypothetical in which Congress itself applied SORNA to pre-act offenders but provided the attorney general with the authority to waive the requirements of the act as he deemed appropriate. And Justice Stephen Breyer and Kagan asked Baumgartel to address how to square Gundy’s argument with a number of other situations in which the violation of agency-specified civil regulations can result in criminal sanctions. Baumgartel ultimately appeared to concede that it “likely would be constitutional” if the court concluded that the best interpretation of SORNA was that it commanded the attorney general to register pre-act offenders to the maximum extent feasible — though she prudently hedged that concession by stressing the important liberty interests at stake in this particular context when the attorney general decides what is and is not feasible.

Jeffrey Wall then argued for the federal government. The justices initially wanted Wall to explain how the government could reconcile its position in this case with its earlier position in United States v. Reynolds. In Reynolds, the government had argued that it had the authority not to specify SORNA’s applicability to pre-act offenders, and Gorsuch evidently felt there was daylight between that contention and the government’s argument in this case. Wall responded that in Reynolds, the government did not brief the separate question now at issue in Gundy: whether SORNA provides sufficient guidance to the attorney general on how he should exercise his authority. 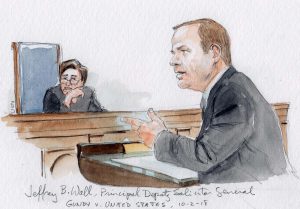 Justice Ruth Bader Ginsburg intervened with an interesting hypothetical: How would a sex offender who was convicted of an offense “thirty years ago” and “had a clean record ever since” receive notice of the registration requirement? She pointed out that such an offender could be charged with failure to register even though that offender had never received notice of that obligation. Wall responded that an “as-applied” due process challenge might be available in such an instance, but that Gundy’s case did not pose those facts.

Kagan was concerned with whether a future attorney general could excuse pre-act offenders from registering entirely. Wall suggested that the court should construe the statute to avoid leaving the attorney general with that latitude.

In a long colloquy with Breyer and Roberts, Wall urged the court to conclude that the statute entrusted the attorney general with “implementation” rather than “policy judgment.” In response to further questions from Gorsuch and Sotomayor, Wall again contended that SORNA’s text alone could be read to contain the requisite intelligible principle. Ultimately, Wall said, the executive branch here was defining a civil requirement “as to which criminal consequences can possibly attach,” and such a delegation fell squarely within the bounds of existing precedent. Wall closed by saying that if Gundy prevails, SORNA’s “efficacy … will arguably be thoroughly gutted.”

On rebuttal, Baumgartel forcefully reiterated that the SORNA delegation was unique: “This is not licensing. This is not civil rule-making. This is the retroactive application of criminal law penalties that affect individual liberty interests in the most profound way. … [T]his delegation is unconstitutional.” From what could be gleaned at oral argument, however, it is not clear that a majority of the justices were persuaded that they needed to reach that ultimate constitutional question, if they could instead construct a limiting reading of the statute by piecing together some of its provisions.