The Supreme Court heard oral argument this morning in a dispute over immunity for the International Finance Corporation, an international organization that makes loans to private businesses to finance projects in developing countries. The plaintiffs in the case, a group of farmers and fishermen, live near a power plant in India that was financed in part by loans from the IFC. They have sued the IFC in the United States for environmental harms caused by the plant, but the IFC maintains that a U.S. law gives it complete immunity from suit. The justices were relatively quiet and therefore difficult to read, but a chief concern for some justices was the possibility that a ruling against the IFC would open the floodgates to more lawsuits against the IFC and other international organizations headquartered in the United States, potentially hampering their ability to carry out their missions. Other justices, however, played down this concern: They suggested that, even if the IFC is not absolutely immune from suit, many cases like these will still not be able to go forward. 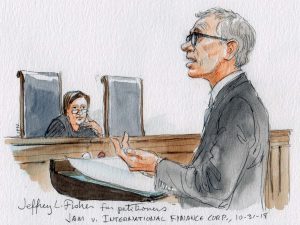 The case before the court today hinges on the interpretation of the International Organizations Immunities Act. That law, enacted in 1945, provides that international organizations “shall enjoy the same immunity from suit and every form of judicial process as is enjoyed by foreign governments.” In 1998, the U.S. Court of Appeals for the D.C. Circuit ruled that, under the IOIA, international organizations have the same immunity that foreign governments had in 1945 – which meant virtually complete immunity; the court of appeals relied on this 1998 decision to rule for the IFC in June 2017.

At the Supreme Court today, lawyers for both sides sparred over the purpose of the IOIA and what Congress intended to do when it enacted the law. Arguing for the plaintiffs, Jeffrey Fisher contended that Congress wanted international organizations to receive the same immunity that foreign governments had at the time a lawsuit is filed, which is exactly what the international organizations got. If Congress had wanted to lock in the immunity that foreign states had had in 1945, he reasoned, it could have done so specifically – but it didn’t, even though the doctrine of immunity for foreign states was “in a great deal of flux.”

Representing the IFC, attorney Donald Verrilli maintained that the IOIA was enacted to fulfill treaty obligations requiring absolute immunity for international organizations. That assertion prompted Justice Elena Kagan to retort that, although Verrilli was arguing that the IOIA was not enacted to make sure that international organizations were treated like foreign governments, “that’s what it says!” 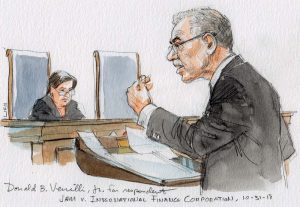 Verrilli also rejected the idea that immunity law was in any kind of “flux” around the time that Congress passed the IOIA. The plaintiffs, he said dismissively, are simply “trying to retrofit the historical facts.”

Fisher pushed back against the suggestion, raised by Justice Stephen Breyer, that the plaintiffs’ interpretation of the IOIA would effectively strip international organizations of all immunity because – unlike foreign governments – the sole purpose of many international organizations is some sort of commercial activity, like the loans at the heart of this case. Fisher stressed that international organizations have many different purposes, many of which are not commercial. And even within institutions like the World Bank Group, of which the IFC is part, that have some commercial activities, not all activities are commercial: The World Bank, for example, gives advice to foreign governments and gives grants for public works programs. It’s just a matter, Fisher emphasized, of “how closely you look at the problems.”

But perhaps the justices’ main concern, voiced by Breyer in a question for Jonathan Ellis, an assistant to the U.S. solicitor general appearing as a “friend of the court” in support of the plaintiffs, was the possibility that a decision for the plaintiffs in this case would open the door for many more lawsuits against the IFC and other international organizations. Can you give me anything, Breyer asked, to assure me that this isn’t going to lead to a lot of lawsuits and won’t interfere with activity that the U.S government supports?

Verrilli echoed this idea, telling the justices that the IFC loans money where private capital won’t go, often in developing countries. As in this case, he observed, the IFC has tried to help the areas where it makes loans by including environmental and labor standards in its loan agreements, but now it is being sued because someone else didn’t comply with those standards. “We’re a big fat target here,” Verrilli complained.

But Chief Justice John Roberts in particular seemed to believe that, even if the justices were to rule against the IFC on the immunity question in this case, many lawsuits would be stymied by other criteria imposed by the Supreme Court in cases involving overseas conduct – and, in particular, the requirement that the conduct at the heart of the lawsuit have taken place in the United States.

Ellis agreed with Roberts, telling the justices that the government has “serious doubts about whether this suit can go forward” because there is no strong connection to commercial activity in the United States.

Verrilli was less enthusiastic, questioning whether lower courts would decide this issue correctly and reminding the justices that there are dozens of international organizations with “billions of dollars of assets” in the United States.

Roberts pressed Verrilli, telling him that the Supreme Court’s cases require more than that the decision to lend the money for the power plant was made in the United States. “Where’s the gravamen” of the wrongful acts alleged in the plaintiffs’ complaint, Roberts asked.

Verrilli responded that, in the IFC’s view, the conduct at the heart of the lawsuit happened in India. Roberts appeared to agree.

Verrilli finished his argument by reminding the justices that the law in the D.C. Circuit for decades has been near-complete immunity for international organizations; by all indications, he contended, that rule seems to have worked well. What the plaintiffs are now asking the Supreme Court to do, he suggested, is “to jump off a cliff” with a new rule. But in these circumstances, he pleaded, if anyone is going to create a new rule, it should be Congress, rather than the Supreme Court.

Justice Brett Kavanaugh, the court’s newest justice, did not participate, presumably because he was involved in the case while he was a judge on the D.C. Circuit. An evenly divided court would leave the D.C. Circuit’s decision in favor of the IFC in place, but the justices are likely to try hard to avoid such a result. Although the justices were not particularly active questioners today, one outcome that could garner five votes might be the one toward which Roberts seemed to be leaning: a ruling that, like foreign states, international organizations can be sued for their commercial activities, but with a reminder that lawsuits based on conduct overseas will be particularly difficult to bring.

A decision in the case is expected by next summer.