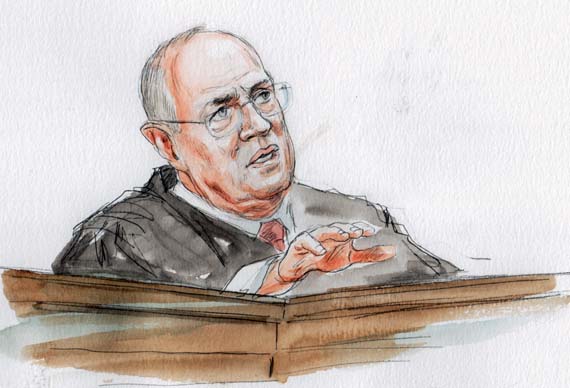 Gary Feinerman sits on the U.S. District Court for the Northern District of Illinois. He clerked for Justice Anthony Kennedy during the October 1993 term.

A decade ago, in his characteristically eloquent remarks at a clerk reunion in the Great Hall of the Supreme Court, Justice Anthony Kennedy reflected on the phrase “pursuit of happiness” in the Declaration of Independence. The justice observed that Thomas Jefferson did not have in mind its modern, colloquial meaning — the ephemeral happiness that follows enjoying a delicious meal or wonderful play, or acquiring the latest gadget. What Jefferson instead meant was the happiness that comes from fulfilling one’s duty to promote civic virtue and advance the public good. Jefferson believed, as did his contemporaries, that fulfilling that duty yields the greatest happiness of which we are capable.

It was altogether fitting to hear Justice Kennedy reflect on Jefferson’s words, for we who were privileged to clerk for him witnessed first-hand how he embodies happiness in its deepest, most fundamental sense. My year with the justice (and an earlier year with the exceptional Judge Joel Flaum) inspired me to try to become a judge myself, and when I was given that opportunity, his example, in both word and deed, taught me how to fulfill the duties of a public official. It is to honor always the rule of law; to listen with an open mind and heart to those with whom we disagree; and to treat every person with the dignity, respect, and compassion they deserve as human beings.

It is impossible to overstate the importance of those values. We are a nation of laws, but as Justice Kennedy well understands, the fate of our republic rests not only on the words inscribed in our Constitution and statutes, but also on our hearts and norms. Our democracy depends on standards of behavior, common decency, principled judgment, and a capacity for self-doubt, each giving rise to the restraint and openness essential to a healthy polity.

That these values are imperfectly respected and observed in public and private life provides grist for much of the Supreme Court’s work.  This is a matter on which Justice Kennedy occasionally would pause to personally reflect.

Very early in his tenure, in Texas v. Johnson, Justice Kennedy cast the vote decisive to the court’s holding that the First Amendment protected a man who desecrated the flag by burning it while those around him chanted: “America, the red, white, and blue, we spit on you.” The justice penned a concurrence expressing “distaste for the result,” a distaste, I imagine, that arose from Gregory Lee Johnson’s having exhibited the very opposite of civic virtue, dignity, respect, and civility. As he explained:

For all the record shows, this respondent was not a philosopher and perhaps did not even possess the ability to comprehend how repellant his statements must be to the Republic itself. But whether or not he could appreciate the enormity of the offense he gave, the fact remains that his acts were speech, in both the technical and the fundamental meaning of the Constitution.

Near the middle of his tenure, in Vieth v. Jubelirer, Justice Kennedy cast the vote decisive to the court’s rejection of a suit challenging as a partisan gerrymander a congressional map drawn by a state legislature. As his concurrence explained, the justice voted as he did despite his belief (which, he noted, the plurality shared) that partisan gerrymandering is incompatible with democratic principles, and only because no viable constitutional standard had been proposed for ascertaining when a gerrymander had gone too far. Still, Justice Kennedy noted that the legislature had not displayed the virtue, restraint, and judgment essential to our democracy:

The ordered working of our Republic, and of the democratic process, depends on a sense of decorum and restraint in all branches of government, and in the citizenry itself. Here, one has the sense that … restraint was abandoned. That should not be thought to serve the interests of our political order. Nor should it be thought to serve our interest in demonstrating to the world how democracy works.

This past week, at the very end of his tenure, in Trump v. Hawaii, Justice Kennedy cast the vote decisive to the court’s rejection of a challenge to an executive order restricting the ability of persons from certain countries to enter our country. The case’s factual and legal background, being top of mind for this blog’s readers, needs no recitation. In his concurrence, which agreed with the court that the executive order permissibly exercised authority given the president by law, the justice offered “this further observation”:

There are numerous instances in which the statements and actions of Government officials are not subject to judicial scrutiny or intervention. That does not mean those officials are free to disregard the Constitution and the rights it proclaims and protects. The oath that all officials take to adhere to the Constitution is not confined to those spheres in which the Judiciary can correct or even comment upon what those officials say or do. … An anxious world must know that our Government remains committed always to the liberties the Constitution seeks to preserve and protect, so that freedom extends outward, and lasts.

It is not for a former clerk offering a tribute, particularly one who sits as a federal judge, to express agreement or disagreement with these or any of Justice Kennedy’s other votes. But it is striking how of a single piece are the three concurrences, how consistent throughout his tenure have been his concerns and prescriptions. And I will confess that I feel deep sadness in reading Justice Kennedy’s words, for in them I sense his heart heavy at the recognition that democratic norms, civility, decency, and restraint have not become as firmly rooted as they ought or need to be.

I hope I am wrong about Justice Kennedy’s heart being heavy. And I hope as well that the justice and his family take tremendous pride in his having served as the nation’s foremost practitioner of, and advocate for, the virtues that Jefferson believed essential to our civic health. May he continue to light that path.