Symposium: Strategy from a punt 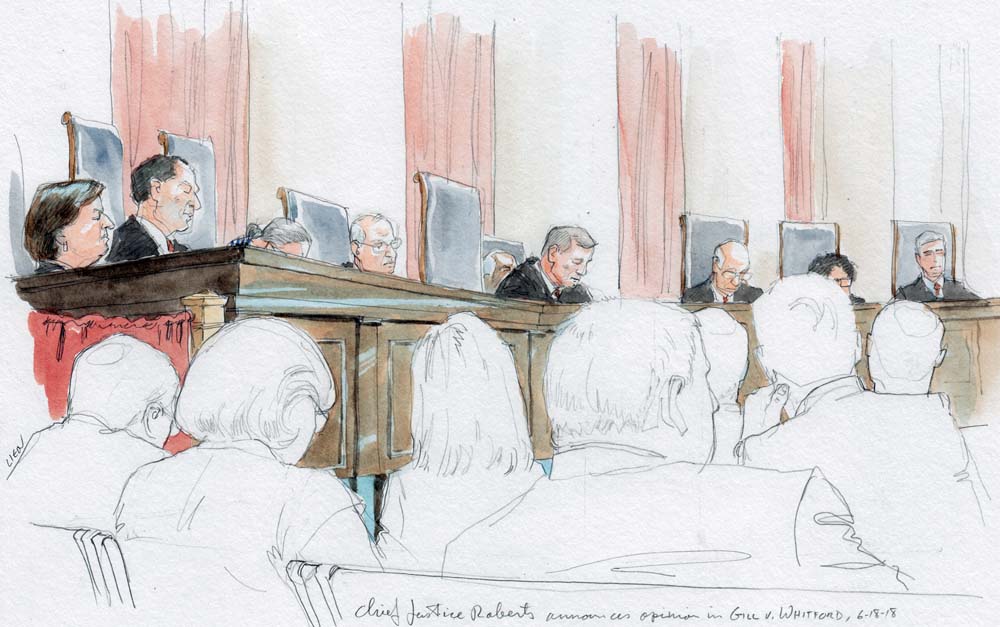 The Supreme Court declined the opportunity offered by Gill v. Whitford and Benisek v. Lamone to clearly draw the line marking when partisan gerrymandering is so extreme that it violates voters’ constitutional rights. But, just as in football, perhaps certain things can still be achieved with a punt. Nearly as soon as probable jurisdiction was noted in Gill and Benisek, commentators began prognosticating whether the court would identify the long-sought manageable standard to determine when such gerrymandering violates the Constitution or would punt, that is, dismiss the cases on standing or procedural grounds. Though many things surrounding partisan gerrymandering remain opaque, the two decisions do leave markers on the trail for litigants.

Although both cases missed opportunities to strike down extreme gerrymanders, the opinions did articulate contributions to partisan-gerrymandering doctrine and standards for litigation practice. Recall that even in previous decisions in which the Supreme Court declined to strike down partisan gerrymanders, it nevertheless offered principles that began to shape the doctrine — principles on which the litigants in Gill and Benisek themselves relied. In Davis v. Bandemer, for example, the court made clear that the lack of proportional representation is not a sufficient basis for a partisan-gerrymandering claim. And in Vieth v. Jubelirer, it set out the structure of partisan-gerrymandering claims as one that requires both intent and effect. In Gill, the plaintiffs made clear that the efficiency gap – a measure of partisan advantage that calculates “wasted” votes — is not predicated on proportional representation, and they presented a theory of partisan discrimination comprising both intent and effect.

Indeed, among the partisan-gerrymandering cases decided so far, Gill may prove to be the most enduring and helpful precedent. Standing – or a party’s legal right to sue — has become a core jurisprudential issue for the modern Supreme Court, and litigation over standing doctrine is critical in almost every area of constitutional law. The road to Obergefell v. Hodges went through Hollingsworth v. Perry, also an opinion by Chief Justice John Roberts. But Gill is a much more helpful opinion than Hollingsworth: Not only does it explain why the threshold test for standing, which requires that a plaintiff suffer a concrete and particularized injury, is not met by the plaintiffs in the case, it also lays out what evidence would be sufficient for an individual plaintiff to have standing to challenge partisan gerrymandering under a vote-dilution theory of injury. And in outlining why an individual plaintiff cannot show statewide injury as a basis for standing to challenge partisan gerrymandering under a vote-dilution theory, the unanimous court articulated a relatively clear theory of vote dilution. In so doing, the court necessarily accepted that plaintiffs in cracked and packed districts have standing to challenge individual districts under such a theory. And adding up those packed and cracked districts in any state suffering under an extreme partisan gerrymander, litigants likely can build out a remedy to this vote-dilution harm that, in practice, may reach the whole state.

At first blush, Benisek appears to offer much less than Gill: It is a paltry five pages and the case may appear to be necessarily tied to its particular procedural posture. But Benisek should be read to stake out a critical guidepost for partisan-gerrymandering litigants. On its face, the decision seems to place blame on these particular litigants for waiting over three years from when their complaint was filed to seek this preliminary relief, and perhaps even filing too late in the life of a districting plan to warrant emergency relief. To take only this from the decision would be to miss an important lesson, even if not one expressly stated by the Supreme Court.

The guidepost offered is that it generally may not be worth partisan-gerrymandering litigants’ effort to seek preliminary injunctions. In Purcell v. Gonzalez, the Supreme Court determined that a motions panel of the U.S. Court of Appeals for the 9th Circuit did not show proper deference to the lower court in enjoining an election regulation just weeks before a scheduled election. This decision sometimes has been used in voting rights cases to rely on the interest in orderly elections and potential voter confusion not to affirm preliminary injunctions. In the face of the court’s reliance on Purcell, it is unlikely that this court — to which those litigating before a three-judge court have an appeal as of right — would conclude in most cases that the balance of equities would support enacting a new map before a case had been decided on the merits. Imagine the hypothetical in which a map was enjoined before a final decision on the merits: A new map, either drawn by the legislature or ordered by the lower court, would be put into place. Voters would have to learn the contours of their new districts and discover who were their new representatives; representatives would have to acquaint themselves with their new districts. If, after the imposition of the new map, enough time passed such that a second election cycle were to occur under the new map (a likely proposition considering how early campaign seasons begin), fundraising would be underway and candidacies declared. Say that before that next election cycle, the case was resolved on the merits with the plaintiffs losing. Would the districts revert back immediately to the challenged map? Even if that remedial map had been passed by the legislature? But what about the plaintiffs’ appeal as of right: Would the reversion be stayed pending appeal? The level of “what ifs” may well be too high for this court’s comfort.

Perhaps more critically for those thinking about litigating these cases, seeking preliminary relief may be unwise litigation strategy. With legislative districts — at the state or the congressional level — there is always another election coming up for which those fighting a partisan gerrymander must litigate expeditiously to get relief in time. With a preliminary injunction in this context, if plaintiffs win, it is nearly guaranteed that the state will take its appeal as of right to the Supreme Court, which could add years before getting to final relief on the merits. If the plaintiffs lose, and they take their appeal to the court, it is likely fruitless based on this court’s reliance on Purcell, and either way again adds at least a year before final relief. If plaintiffs decline to take that appeal, they end up in no better a position than if they had not sought the injunction, and in fact may be worse off overall because they have delayed their potential relief by the time it took to litigate the preliminary injunction and wait for the lower court’s decision. In most scenarios, seeking a preliminary injunction will be no gain, and precious time lost.

Although perhaps never before was the potential for a “manageable standard” so eagerly anticipated, litigants should not despair. Those looking to vindicate the rights of voters should navigate by the guideposts erected by the Supreme Court’s punt. Those guideposts can mark a way to finally vindicating the rights of voters, which have been repeatedly violated by legislatures across the country who ensure that they and their party-fellows choose their voters and not, as it should be, the other way around.