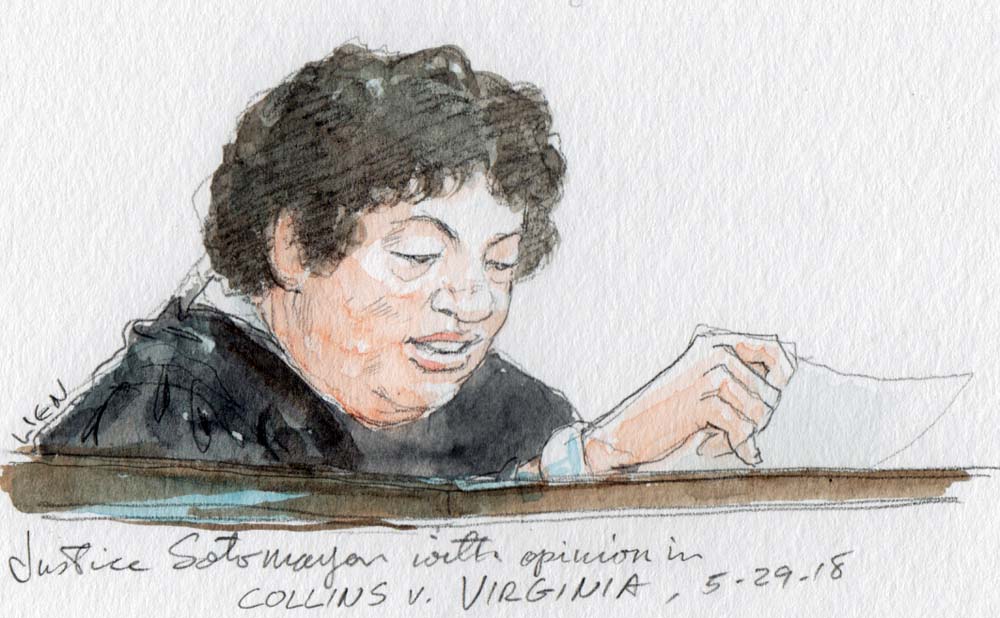 Sotomayor promised to “raise an eyebrow and act accordingly” if she receives applications that don’t follow the plan, which sets a schedule for clerk hiring after a law student’s second year and eliminates “exploding” clerkship offers. Justices Ruth Bader Ginsburg, Stephen Breyer and Elena Kagan have also voiced support for the plan.

An ad hoc committee on law clerk hiring, comprised of Chief Judges Merrick Garland, Robert Katzmann, Sidney Thomas and Diane Wood, proposed the plan after a letter signed by more than 100 law school deans indicated that the present practice, in which students are hired for clerkships after their first year, “altered the first-year experience, raised important distributional concerns, and undermined our faculties’ ability to provide judges with the information they need to make wise hiring choices.”

Sotomayor lamented that judges’ failure to follow earlier, similar plans undermined the values of discourse, courtesy and respect that “we’re supposed to try to teach.” Judges send a “poor message” “when we can’t act civilly to each other,” she continued.

As is her custom, Sotomayor walked around the audience. “Hugs are a little tough right now,” she joked, her arm in a sling while she recovers from shoulder surgery after falling at her home this spring. The injury didn’t stop her from exchanging “one-sided hugs” and handshakes with large numbers of people, including former clerks. Some people came ready with books for her to sign.

Sotomayor said that during her confirmation hearing, a friend told her, “This is not about you. This is about my daughter who needs to see somebody like herself be in a position of power.” “What I could give others is being myself,” Sotomayor said she decided, “as genuine as I could with the world.”

Perhaps in that spirit, Sotomayor did not seem shy in her remarks. Asked about a study by Tonja Jacobi and Dylan Schweers finding that the female justices are disproportionately interrupted by their male colleagues and by male advocates, Sotomayor responded, to applause, “Is there a woman in the room who’s ever failed to notice that?”

Sotomayor said she has observed that in conference, a comment by Ginsburg might go unremarked upon by the rest of the justices. But when a male justice makes a similar point, “suddenly they’re perking up.” “That happens routinely,” she reported.

“I give credit to the chief justice,” she continued. Since the study, which has “changed some of the dynamics on the court,” she has “noticed him being more of a referee during arguments,” striving to make sure interrupted questions get answers. Other male justices have apologized as well.

As for the “RBG” documentary, Sotomayor said she “loved it.” “I am shamelessly promoting it,” she continued; it’s “hysterically funny, informative, just plain entertaining.” Her favorite part is “seeing Justice Ginsburg laugh so much.” “She’s not a jokester by personality,” Sotomayor continued. She did reveal one quip Ginsburg made to President Barack Obama when he asked at Justice Elena Kagan’s swearing-in what Ginsburg thought of her new sister justices.

“I love them but I’ll be happier when you give me six more.”

Melissa Murray of UC Berkeley School of Law, who moderated today’s event, observed that while Ginsburg has become “Notorious,” Sotomayor has inspired a “cottage industry” of children’s books. Titles include “Who Is Sonia Sotomayor?,” “I am Sonia Sotomayor” and “Sonia Sotomayor: I’ll Be the Judge of That!”

Sotomayor herself is the author of the children’s book “Turning Pages: My Life Story,” as well as an adaptation of her memoir for middle school students. Another children’s book she is writing for next summer features children with different life challenges who together produce a garden. She hopes the book will explain that challenges can also be strengths and that “we build this world together.”