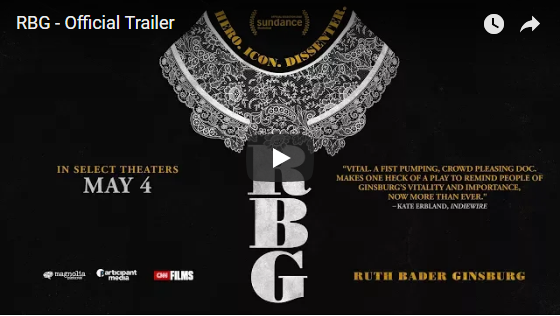 “RBG,” the new documentary on Justice Ruth Bader Ginsburg, is sometimes funny, sometimes poignant, always engaging and beautifully put together. For viewers who already follow the Supreme Court regularly, it does not break a lot of new ground. (Beyond Ginsburg’s fondness for prunes, there was very little that I didn’t already know.) But people like me are not the film’s target audience. The film is clearly a celebration of Ginsburg, hoping to broadcast her story far and wide.

The film uses Ginsburg’s own statements at her 1993 confirmation hearing as the backbone for her story. (Look for a young Elena Kagan sitting behind then-Senator Joe Biden, for whom Kagan worked during Ginsburg’s confirmation hearings, when Ginsburg declared that she hoped to see three or four more women on the Supreme Court during her tenure.) But the filmmakers also enjoyed what was apparently extensive access to Ginsburg herself: We see her in her chambers, working at her desk at home late into the night, wearing a “Super Diva” sweatshirt during a session in the Supreme Court gym with her trainer, and with family members at the opera. Throw in Ginsburg family home movies, audio (if only there were video!) from her six appearances before the Supreme Court as an advocate, and interviews with friends, colleagues and former clients, and the result is 97 minutes of a film that is both informative and a lot of fun.

The film weaves together three different stories. The first is the key role that Ginsburg played in the legal battle to gain equal rights for women, including before she became a judge and then a justice. This is almost certainly the topic with which viewers are least likely to be familiar, and the film handles it well. For younger viewers who may take for granted the rights enjoyed by women today, it’s a bit of an eye opener. The film notes that, when Ginsburg began her quest in the courts, employers could fire a woman simply for becoming pregnant. Her colleagues describe the meticulous legal strategy that Ginsburg constructed, which relied in no small part on challenging laws that benefitted women at the expense of men, and interviews with Ginsburg’s former clients help to bring the story to life. One such client is Stephen Wiesenfeld, a young widower who wanted to be able to stay home to care for his infant son, but was told that he was not eligible for Social Security benefits because he was a man – even though his late wife could have received the benefits if the scenario were reversed.

The second storyline explores how the “Notorious RBG,” an octogenarian grandmother serving on a court whose proceedings are never televised, became a pop culture icon who has inspired everything from Saturday Night Live sketches to RBG tattoos and – as one law student puts it – “merch.” The film attributes the RBG phenomenon to the justice’s blistering dissents in 2013 and 2014, in cases like Shelby County v. Holder, in which a divided court struck down the formula used to determine which state and local governments must apply for approval from the federal government before making changes to their voting laws. Discarding the preapproval requirement even though it continues to block changes that would discriminate against minorities, Ginsburg complained strenuously, “is like throwing away your umbrella in a rainstorm because you are not getting wet.” It’s not necessarily a satisfactory explanation for Ginsburg’s social media stardom, but – as with so many pop-culture trends — there may not be a real way to explain it, no matter how hard you try.

The movie’s third strand is a love story. Ruth Bader was set up on a blind date with Martin Ginsburg while they were both undergraduates at Cornell, and they were married after graduation. She has famously said that Marty, as he was known, “was the first boy I knew who cared that I had a brain.” Their partnership lasted over 50 years, until his death from cancer in 2010. The film includes footage of Ginsburg in her chambers watching old video of her late husband. “He’s so young,” Ginsburg says wistfully. And one of the most touching moments of the film comes when Ginsburg reads aloud from a note that her husband left on his bedside table shortly before he died. The filmmakers only capture this with audio, but video is not necessary (and would even feel like an invasion of privacy): The emotion in his note and her voice is enough.

Marty Ginsburg was always extremely supportive of his wife’s career, even when it was rare for women to work outside the home at all. Nowhere was this support more visible than Marty’s role in his wife’s nomination to the Supreme Court. The 60-year-old judge was not an obvious candidate to fill the vacancy created in 1993 when Justice Byron White retired, but Marty Ginsburg organized an extensive letter-writing campaign that prompted President Bill Clinton to interview her. Once she was in the door, Ginsburg – whom NPR legal affairs correspondent Nina Totenberg, a longtime Ginsburg friend, calls a “performer” when she needs to be – took it from there: In an interview for the film, Clinton explains that he knew within 15 minutes of their meeting that he wanted to nominate Ginsburg.

“RBG” does not pretend to be an especially objective film. The only real criticism of Ginsburg comes from George Mason University Antonin Scalia Law School professor Helen Alvaré, who appears briefly toward the end of the movie to condemn the justice’s comments about then-presidential candidate Donald Trump – for which Ginsburg has apologized. But the film, which opens in theaters tomorrow, is nonetheless a must-see for anyone interested in women’s rights, the law or the “Notorious RBG.”