Are men and women equal at the Supreme Court? The Supreme Court bench remained an exclusively male domain for almost two centuries, and even now only four of the 112 justices have been female. Now three female justices sit on the bench, suggesting that gender equality on the court is suddenly within reach. But equality is not just a question of representation – our new research shows that even when women become justices of the Supreme Court, they are given less respect than the male justices give one another, and receive less deference from male advocates.

Our empirical study examines interruptions among justices, and between the justices and the advocates, during Supreme Court oral arguments. It shows that women still do not have an equal opportunity to be heard on the highest court in the land. In fact, as more women join the court, the reaction of the male justices and the male advocates has been to increase their interruptions of the female justices.

For example, in the 2015 term, Justice Elena Kagan was interrupted ten times or more each by Chief Justice John Roberts and by Justices Samuel Alito and Anthony Kennedy. Justice Sonia Sotomayor was interrupted 15 times by Kennedy, 14 times by Alito and 12 times by Roberts. Kennedy also interrupted Justice Ruth Bader Ginsburg 11 times. Only two male justices suffered interruption by another justice at the double-digit level, despite there being twice as many men as women on the court. The most any woman interrupted any individual male justice during that term was seven times.

Such behavior matters beyond simple rudeness: Oral arguments shape case outcomes. This pattern of gender disparity in interruptions could create a marked difference in the relative degree of influence between the male and female justices. Furthermore, oral arguments serve other purposes, including: focusing the justices’ minds, helping them gather information to reach decisions as close as possible to their desired outcomes, and providing an opportunity to communicate and persuade their colleagues. When a justice is interrupted, her point is left unaddressed, and her ability to influence the outcome of a case or the framing of another justice’s reasoning is undermined.

Psychological and linguistic research has long shown that gender plays a significant role in interruptions. In groups or one-on-one conversations, in social or professional contexts, women are disproportionately interrupted, by both men and women. This is not because women are more talkative (a common misconception): Men actually talk more than women (and our data confirms this for the Supreme Court). Those who study the phenomenon regard interruptions as assertions of power through verbal dominance. But that should mean that women in positions of power are interrupted less – and there are few more powerful positions than being a Supreme Court justice. Yet the female justices are just like other women: talked over by their male colleagues. 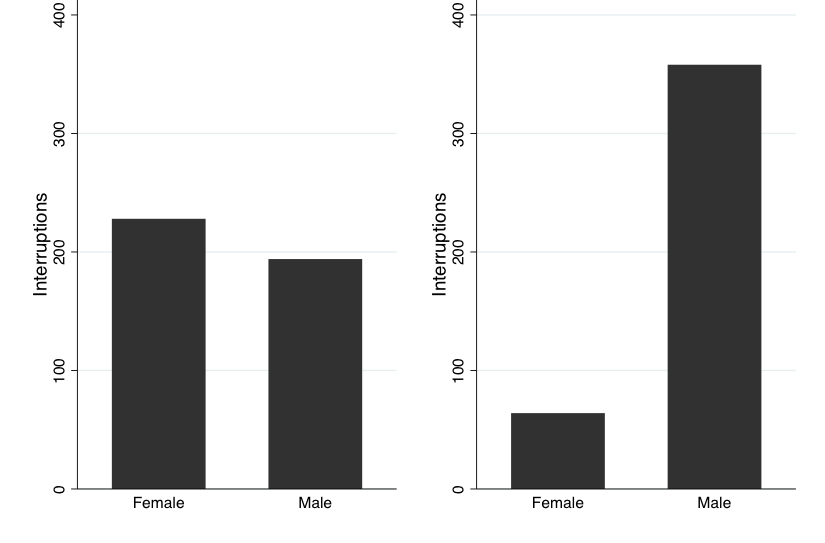 We also considered the possibility that the apparent gender effect may simply be a product of seniority, because two of the three female justices – Kagan and Sotomayor – are very junior and each is interrupted more frequently than the more senior Ginsburg. Senior justices do interrupt junior justices more frequently than vice versa, and the difference is statistically significant. However, there is no comparison in the size of the effect between seniority on one hand and gender and ideology on the other: Gender is approximately 30 times more influential than seniority.

But that does not mean that the length of a justice’s tenure on the court does not matter. Time on the court gives women a chance to learn how to avoid being interrupted – by talking more like men. Early in their tenures, female justices display a tendency to frame questions politely, using prefatory words such as “may I ask…”, “can I ask…”, “excuse me” or beginning with the advocate’s name. This provides an opportunity for another justice to jump in before the female justice gets to the substance of her question. We found that women gradually learn to set aside such politeness. Figure 2 illustrates the rate at which various justices use these framing words and phrases over time. 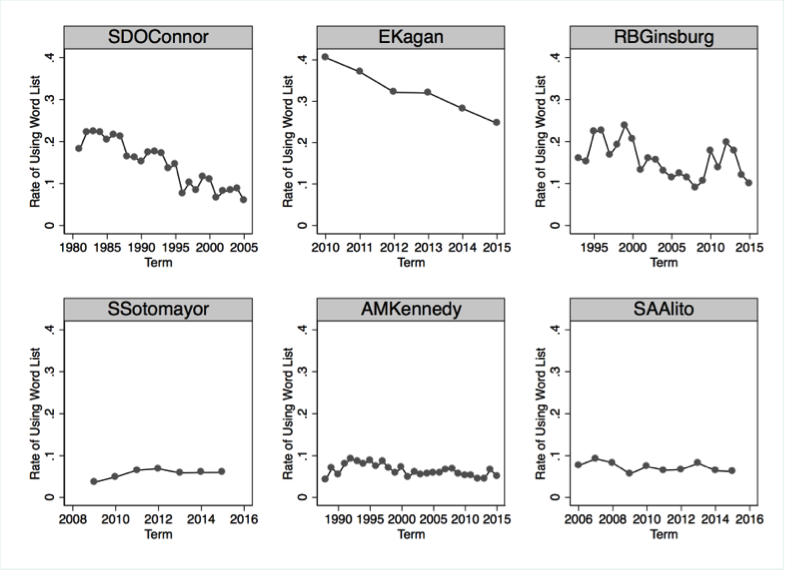 Three of the four women who have served on the court show clear downward trends in their use of polite phrasing. Very few of the men show similar patterns – most male justices look like Kennedy and Alito, with flat slopes that indicate little change in behavior. Furthermore, as women adapt their behavior, their rates of polite language usage approach those of men, but do not always reach the low levels at which many male justices start off. For instance, after more than 30 years on the Court, Ginsburg still uses polite language more than either Kennedy or Alito did immediately upon joining the court. Reducing use of polite phrasing does not entirely prevent interruptions: Women continue to be interrupted more than men, and Sotomayor is interrupted despite minimal use of this language. But both O’Connor and Ginsburg were interrupted less over time, even as interruptions increased. This suggests that Kagan would be wise to continue absorbing the lesson that her more senior female colleagues have learned.

Women changing their questioning techniques is not the only possible solution to this problem. The chief justice could play a larger role as referee. The chief justice should enforce the existing rule that prohibits advocates from interrupting the justices. This would set an example for the advocates, the public watching or listening to the arguments, and quite possibly even the other justices.

The chief justice could also be more assertive in preventing an interrupting justice from continuing with his question, by directing the advocate back to the interruptee. Roberts does this occasionally, but sometimes he gives the floor to the interrupter instead of the interruptee. If he were more aware of the gender and ideological imbalance of interruptions, he would likely be more evenhanded. Research like ours has the potential to open the eyes of the justices to what are probably subconscious biases.