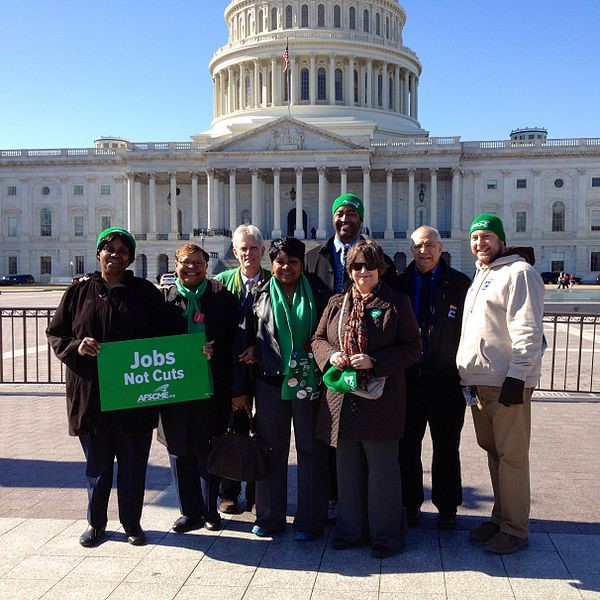 [Editor’s note: An earlier version  of this post ran on December 18, as an introduction to this blog’s symposium on Janus v. American Federation of State, County, and Municipal Employees, Council 31, as well as at Howe on the Court, where it was originally published.]

Like many employees, Mark Janus was upset about deductions from his paycheck – specifically, the roughly $45 per month that goes to the local branch of the American Federation of State, County, and Municipal Employees, the union that represents him. But unlike most employees, Janus – a child-support specialist at the state’s Department of Healthcare and Family Services, who does not belong to the union – may be able to do something about that deduction. Next week the Supreme Court will hear oral argument in his challenge to the constitutionality of the fee. It’s a familiar question for eight of the nine justices, who have already heard oral argument on the issue twice. The court did not resolve the issue the first time; the second time, in the wake of the death of Justice Antonin Scalia, they deadlocked. This means that the outcome in Janus’ case could hinge on the vote of the court’s newest justice, Neil Gorsuch.

In 1977, in Abood v. Detroit Board of Education, the Supreme Court ruled that government employees like Janus who do not belong to a union can be required to pay a fee – often known as a “fair share” or “agency” fee – to cover the union’s costs to negotiate a contract that applies to all public employees, including those who are not union members. The justices reasoned then that allowing the fees would help to avoid both labor strife and the prospect that nonmembers could be “free-riders” who benefit from the union’s collective bargaining efforts without having to pay for them. But that decision has come under fire in recent years, in a series of cases asking the court to overrule Abood and hold that requiring an unwilling employee to pay even this more limited fee violates the First Amendment.

The justices agreed to tackle the question presented by Janus’ case four years ago, in another case from Illinois. But they didn’t decide the issue then; instead, they ruled that the employees in that case – home health aides, who usually take care of family members and are compensated by the state – were not actually public employees. However, five justices – Justice Samuel Alito, whose opinion for the court was joined by Chief Justice John Roberts and Justices Antonin Scalia, Anthony Kennedy and Clarence Thomas – suggested that they might be willing to reconsider Abood.

Two years later, another challenge to the agency fees returned to the Supreme Court, this time brought there by a group of California public-school teachers. The justices heard oral argument in the case on January 11, 2016, but they had not yet announced their decision before Scalia died a few weeks later. Six weeks after Scalia’s death, the court revealed that it was deadlocked, issuing a one-sentence order that left the lower court’s ruling in favor of the union in place. The teachers asked the court to reconsider that ruling, but – after repeatedly putting off action on the request – it declined to do so.

Enter Mark Janus, who came to the Supreme Court after the U.S. Court of Appeals for the 7th Circuit rejected his argument that the agency fee violated his rights under the First Amendment, explaining that it did not have the power to overrule Abood. But the Supreme Court does have that power, and earlier this year it agreed to review Janus’ case.

Janus’ argument in the Supreme Court for overturning Abood rests on the idea that, because issues like salaries, pensions and benefits for government employees are inherently political, agency fees – even if characterized as the costs of contract negotiations – actually finance speech that is intended to influence the government’s personnel policies. Therefore, he contends, requiring him to pay an agency fee is no different from requiring him to subsidize a group that lobbies the government. He points out that when the union was bargaining with the state, the state wanted to save money on health insurance and indicated that it could not afford across-the-board salary increases, but the union “took opposite positions.”

Because an agency fee effectively requires him to speak, he continues, the Supreme Court must subject it to heightened constitutional scrutiny – which it cannot survive. First, he asserts, the government does not have a pressing need to bargain only with unions – indeed, it doesn’t need to bargain at all and instead could simply decide on employment policies. But even if there were such a compelling need, he adds, unions don’t need to require all employees to pay for that bargaining, because unions presumably would want to do it anyway.

On behalf of the state of Illinois, Attorney General Lisa Madigan and Michael Hoffman, the acting director of the state’s Department of Central Management Services, counter that there is no reason to overrule Abood, which was correctly decided. The Supreme Court has long held, they argue, that a state has “far broader powers when” – as here – it is acting as an employer rather than a regulator, and a different (and less stringent) standard of review applies in such cases. The only relevant questions, they suggest, are whether a restriction on an employee’s speech affects the employee’s ability “to speak as a citizen on a matter of public concern,” and, if so, whether the government had a good reason for treating the employee differently from a member of the general public.

Janus urges the justices to scrap Abood for another reason: It has simply proved to be “unworkable,” because of the difficulties that arise in determining which expenses can be attributed to collective bargaining efforts. The current system, he argues, gives unions too much discretion to determine what fees they will require nonmembers to pay. Most of AFSCME’s expenses, for example, arise from salaries and benefits for union officials and employees. The fees that nonmembers like Janus have to pay, he asserts, therefore “turn, to a large degree, on self-interested judgments by union officials about how they and other union employees spend their time.”

AFSCME and the state push back against the idea that Abood is somehow “unworkable,” reminding the justices that the Supreme Court not only left its ruling in that case “undisturbed” in Harris and Friedrichs, but has applied it in other contexts, ranging from bar associations to agricultural marketing. Any supposed problems with distinguishing between the various kinds of expenses, the state adds, are “illusory,” and certainly not enough to justify overruling Abood. Indeed, they note, the Supreme Court has over the years refined the test for distinguishing between the fees that can be charged to nonmembers and those that cannot, and has established procedural requirements to further ensure that employees’ rights are protected.

More broadly, the state stresses, it is not enough for Janus to simply contend that the decision in Abood was wrong; there must be a special reason to justify overruling it. But no such justification is present here, they conclude, particularly when workers, unions and governments have all relied on the decision for decades. The state’s description of the scope of that reliance also illustrates the potentially seismic effect of a ruling against the unions: More “than 20 states have enacted statutes permitting the collection of fair-share fees. An untold number of employment contracts have been negotiated pursuant to those laws. Those contracts, in turn, cover millions of public employees represented by unions that agreed to represent them in return for a guarantee that they would be adequately compensated” for their efforts.

In addition to the composition of the court, one other thing has changed in the two years since the justices last heard oral argument on the agency-fee question: the position of the United States. In Harris v. Quinn and Friedrichs, the federal government filed briefs supporting the unions and argued that the court should reaffirm its decision in Abood. But the Trump administration now urges the justices to overrule that decision, telling them that the government’s earlier position “gave insufficient weight to the First Amendment interest of public employees in declining to fund speech on contested matters of public policy.” The justices are sometimes skeptical of changes in position, but this may be a case in which a switch may not make much of a difference. If (as seems very possible) eight justices have already made up their minds, all that really matters may be what Gorsuch thinks. And we’ll have to wait until next week to get a better sense of that.