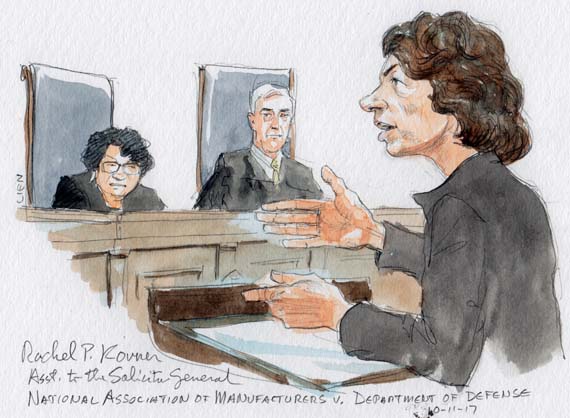 The scope of the federal government’s regulatory authority under the Clean Water Act has long been controversial. Stretch it too far, and it appears that the federal government can regulate every puddle in the nation; narrow it too much, and the government is left unable to protect the quality of interconnected waters. For that reason, each time the government has promulgated a rule defining the act’s geographic scope — as it did in the 2015 “Clean Water Rule” — lawsuits quickly follow. In yesterday’s argument in National Association of Manufacturers v. Department of Defense, the Supreme Court considered the preliminary question of whether those lawsuits should be filed in district courts or courts of appeals.

As described in my preview, the case hinges on a provision of the statute, 33 U.S.C § 1369(b)(1), which specifies seven actions by the Environmental Protection Agency that are reviewable directly in the courts of appeals. The petitioners — a varied group including the National Association of Manufacturers, states, environmental groups, electric utilities and agricultural companies — all argue that the Clean Water Rule does not fall within any of the EPA actions on the list, so lawsuits challenging the rule should be filed in district court. The United States, along with fellow-respondents the Natural Resources Defense Council and the National Wildlife Federation, argues that the rule does fall within the provisions that trigger direct appellate review. Specifically, the government argues, the rule falls within Subsection (E), which covers EPA actions “in approving or promulgating any effluent limitation or other limitation under section 1311, 1312, 1316, or 1345 of this title”; as a fallback, the government also argues that the rule is within the scope of Subsection (F), which covers EPA actions “in issuing or denying any permit under section 1342 of this title.”

The oral argument focused largely on whether the government’s position can be squared with the text of Section 1369(b)(1). Timothy Bishop, arguing for NAM, began by stressing that his position is consistent with the act’s text: The Clean Water Rule simply isn’t an “effluent limitation or other limitation,” and it is not promulgated “under” section 1311. Justice Sonia Sotomayor, however, suggested — echoing the government’s position — that perhaps the rule is such a limitation. After all, she noted, “[o]nce you define navigable waters you say where an effluent applies or doesn’t.” Rachel Kovner of the U.S. solicitor general’s office, representing the United States, stressed that point: The rule is a limitation because it restricts where pollutants can be discharged. As for whether the rule was promulgated “under” section 1311, Justice Elena Kagan asked whether “under” could mean “regulating actions taken under” section 1311 — which would seem to cover the rule. Kovner also argued that the rule is “under” section 1311 in the sense that it was promulgated under the authority of section 1311. On the whole, however, the government’s textual argument faced an uphill battle, and it was likely not a good sign for Kovner when Justice Stephen Breyer remarked that it was “hard to agree” with the government’s position. 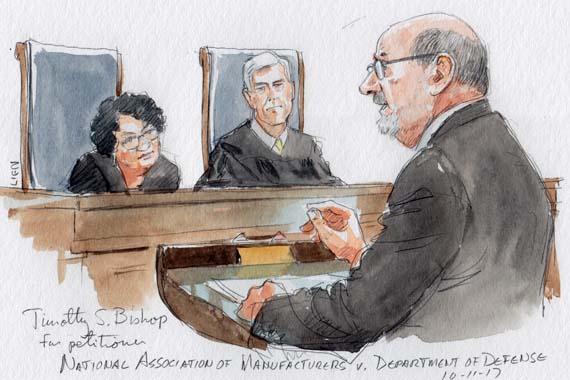 But if the petitioners had the textual advantage, they faced harder questions about whether the statute makes any sense under their reading. As Justice Ruth Bader Ginsburg pointed out, NAM’s position means that individual permit decisions go to appellate courts, whereas broad definitional pronouncements like the Clean Water Rule go to the district court, and “[o]ne would think it would be just the other way around.” Bishop conceded that he was not aware of any explanation for why Congress had assembled this seemingly incongruous list of actions that get direct appellate review. This led Kagan to ask whether Bishop’s position was that the court should “just resign [itself] to thinking of this as having no particular rationale. Congress said what it said … It’s all a themeless pudding and that’s just what it is?” Bishop said yes, stressing that the best way to handle seemingly puzzling language is to stick to the text. Ohio Solicitor General Eric Murphy, sharing argument time with Bishop, suggested that a unifying theme for the list is that each of the seven subsections refers to a specific action that Congress was instructing the EPA to take. Perhaps those, above others, were actions that Congress thought should receive direct appellate review.

The argument also brought to the surface two broader and competing concerns. On one hand, several questions pointed out the inefficiency of NAM’s approach. Chief Justice John Roberts, for example, observed that NAM’s position calls for district courts around the country to review the agency’s entire administrative record, and then for appellate courts to review the exact same record “all over again.” This led him to ask, “You’ll agree that it’s inefficient, won’t you?” In response, both Bishop and Murphy suggested that their rule actually fosters efficiency by creating a clearer jurisdictional test. Kovner resisted that characterization, arguing that, to the contrary, the government’s rule “is very clear”: It just asks “does it impose a limitation under section 1311?”

But would the government’s position raise problems under the due process clause? This argument, which Murphy identified, flows from Section 1369(b)(2)’s limitation on future litigation: When direct appellate review applies, Section (b)(2) says that challenges must occur within 120 days of the relevant action, and litigants may not later challenge the EPA decision at issue if they could have obtained review within that 120-day period. What if, Roberts asked, the government brings an enforcement action against “a farmer in Kansas” who doesn’t think he’s within the Act’s geographic scope — is that farmer barred from challenging the rule as a defense? Kovner explained that the Supreme Court has previously left open whether applying a similar bar in enforcement situations would raise due-process concerns. She urged that if due-process concerns did exist (she did not take a firm position on whether they did), the solution would be to construe Section (b)(2) narrowly — an approach that doesn’t bear on the proper meaning of Section (b)(1). Justice Neil Gorsuch seemed to suggest, however, that this due-process carve-out from appellate jurisdiction dimmed the government’s purportedly bright-line rule.

Finally, the justices inquired about the case’s potential mootness. The Trump administration has already proposed rescinding the Clean Water Rule, and Kovner opined that this case would become moot if that rescission occurred before the court reached a decision. But, as both she and Bishop pointed out, the administration’s repeal process will take an unknown amount of time, and this controversy remains live in the interim.