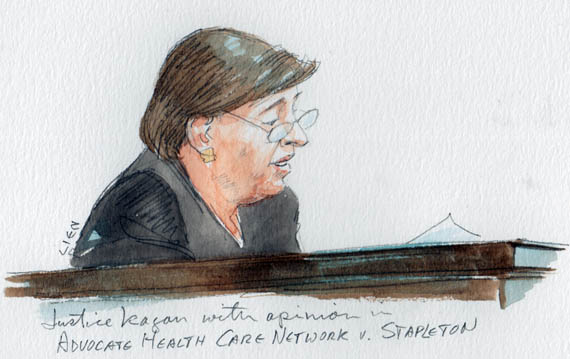 The justices’ decision today in Advocate Health Care Network v. Stapleton resolves a question of considerable significance for the world of pension plans: whether the church-affiliated hospitals that play such a major role in our health-care system must comply with the Employee Retirement Income Security Act, which includes an array of rules designed to ensure the solvency of pension plans and otherwise protect the plans’ beneficiaries. On the one hand, exempting those plans from ERISA exposes the hospitals’ employees to the catastrophe of making career-long contributions to a pension plan that is insolvent by the time they retire – a catastrophe from which ERISA has protected almost all of us for nearly half a century. On the other hand, because compliance is expensive, extending those rules to church-affiliated hospitals would raise the costs of health care at a time when the need for cost containment in the health-care industry could hardly be more pressing. Justice Elena Kagan’s opinion for a unanimous court of eight justices (the case having been argued before Justice Neil Gorsuch joined the court) sidesteps those issues entirely, resting directly on the language of ERISA.

Although it seems odd to think that an exemption with churches at the core should exempt church-maintained plans only if they are established by churches but exempt affiliate-maintained plans without regard to their provenance, the court plainly decided to take Congress at its word. With a presentation you would expect to have seen on a PowerPoint slide in one of Kagan’s class sessions from her days as a law professor, the opinion portrays the question of statutory reading as “a simple logic problem”:

Premise 1: A plan established and maintained by a church is an exempt church plan.

Deduction: A plan maintained by [an affiliated] organization is an exempt church plan.

In sum, “[b]ecause Congress deemed the category of plans ‘established and maintained by a church’ to ‘include’ plans ‘maintained by’ [affiliates], those plans – … all those plans – are exempt from ERISA’s requirements.”

Surely the biggest hurdle that the employees faced was the apparent oddity of the language Congress adopted to extend the church-plan exemption. If the employees were correct – that Congress intended to burden affiliate-maintained plans with the same establishment requirement as church-maintained plans – you would expect Congress to have said that for purposes of the church exemption the reference to “a plan maintained by a church includes a plan established and maintained by [an affiliate].” But Congress’ statement that “a plan established and maintained by a church includes a plan maintained by [an affiliate]” is so odd that it is difficult to credit the idea that its failure to “adopt that ready alternative” was simply a mistake. Exaggerating somewhat, Kagan quips that “the employees ask us to treat those words as stray marks on a page – notations that Congress regrettably made but did not really intend. Our practice, however, is to give effect, if possible, to every clause and word of a statute.”

At bottom, the employees needed to persuade the justices that waiving the establishment requirement for affiliate-maintained plans was not simply odd (as I characterized it above), but so bizarre that the justices should walk away from a straightforward reading of the language. The opinion explains, though, that the briefing and argument did not convince the court that reading the statute literally had “the contextual implausibility – the ‘Congress could not have meant that’ quality” – necessary to dislodge the justices from the path of least resistance.

It shows how far the court has moved in the still-nascent post-Scalia epoch that an opinion can justify its sense of what Congress could and could not have meant by reference to legislative history, without a single word of objection or qualification. In a passage that would have been remarkable in a unanimous opinion a few short years ago, Kagan reports that “everything we can tell from extra-statutory sources about Congress’s purpose … supports our reading of its text.” To be sure, the opinion’s tack is to suggest that the legislative history is unhelpful rather than to say that the legislative history is affirmatively persuasive:

We say ‘everything we can tell’ because in fact we cannot tell all that much. The legislative materials in these cases consist almost entirely of excerpts from committee hearings and scattered floor statements by individual lawmakers – the sort of stuff we have called ‘among the least illuminating forms of legislative history.’ And even these lowly sources speak at best indirectly to the precise question here.

I suspect, though, that Kagan’s willingness to include a two-page interlude analyzing the vagaries of those materials would have prompted a curt rejoinder from Justice Antonin Scalia characterizing the exercise as a waste of time. The opinion does have a bright side for Scalia fans — the fifth citation already this term for the treatise on “Reading Law” that Scalia wrote with Bryan Garner (up from two citations during Scalia’s last term on the bench).

I should close by mentioning that this ruling extends Lisa Blatt’s unparalleled won-lost record before the justices to a glittering 33-2. It may not, though, bring a conclusive end to the efforts of employees to bring these hospitals within ERISA. Although Justice Sonia Sotomayor joined Kagan’s opinion and commented that she “agree[s] … that the statutory text compels today’s result,” she wrote separately to emphasize the debatable-at-best policy implications of the decision. Among other things, she pointedly notes that “organizations such as petitioners operate for-profit subsidiaries, employ thousands of employees, earn billions of dollars in revenue, and compete in the secular market with companies that must bear the cost of complying with ERISA. … This current reality might prompt Congress to take a different path.” On that point, of course, only time will tell.