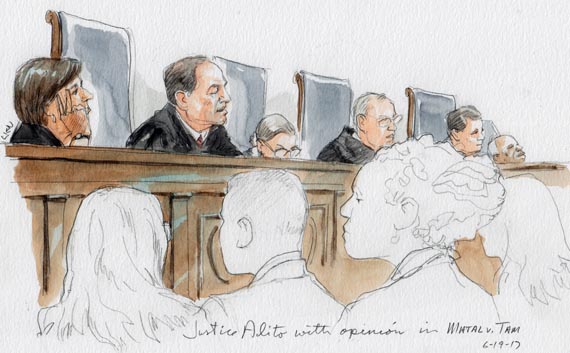 In 2011, Simon Tam asked the U.S. Patent and Trademark Office to register the name of his band: The Slants. Tam and the band acknowledged that the term “slants” is often regarded as derogatory to people with Asian ancestors, but they had hoped to use it as their name to “reclaim” the term and erase its negative connotations. However, the PTO rejected Tam’s request, relying on a provision of federal trademark law barring the PTO from registering trademarks that may disparage other people, whether they are alive or dead. A federal appeals court agreed with Tam that this provision, known as the “disparagement clause,” violates the First Amendment. In a significant free-speech decision, the Supreme Court today upheld that ruling, holding that the disparagement clause “offends a bedrock First Amendment principle:  Speech may not be banned on the ground that it expresses ideas that offend.”

But the eight-justice court could not agree on the reasoning that it used to reach that conclusion. Four justices – Justice Samuel Alito, joined by Chief Justice John Roberts and Justices Clarence Thomas and Stephen Breyer – invalidated the disparagement clause on First Amendment grounds. Four others – Justice Anthony Kennedy, joined by Justices Ruth Bader Ginsburg, Sonia Sotomayor, and Elena Kagan – believed that the provision was subject to an even more stringent test, which it could not pass. In the end, however, the disagreement over the correct approach made little difference.

The government had advanced several reasons why the disparagement clause does not violate the First Amendment’s guarantee of freedom of speech. First, it contended that trademarks are government speech, which is not subject to the First Amendment. All eight justices agreed that this argument misses the mark. In an opinion by Alito, the court explained that the federal government “does not dream up these marks, and it does not edit marks submitted for registration.” Therefore, “it is far-fetched to suggest that the content of a registered mark is government speech.” If it were, Alito continued, the federal government “is babbling prodigiously and incoherently.”

In a part of the opinion joined by Roberts, Thomas and Breyer, Alito next rejected the government’s efforts to compare trademarks to “government programs that subsidized speech expressing a particular viewpoint.” The cases to which the government points, Alito stressed, all involved the government’s payment of “cash subsidies or their equivalent”; by contrast, when someone like Simon Tam applies to register a trademark, he has to pay the government a filing fee and then pay another fee to maintain his registration if he succeeds.

Finally, Alito turned to, and rebuffed, the government’s argument that trademarks are commercial speech, which receives less protection under the First Amendment than other speech. Even if it is commercial speech, Alito reasoned, the disparagement clause still can’t pass the less stringent test used to evaluate restrictions on such speech. To survive constitutional muster, limitations on commercial speech must be drawn narrowly to advance a “substantial interest.”

The government attempted to justify the disparagement clause as necessary to protect “the orderly flow of commerce” and to prevent “underrepresented groups” from being inundated with “demeaning messages in commercial advertising.” But the latter rationale, Alito complained, boils down to “an interest in preventing speech expressing ideas that offend” – which “strikes at the heart of the First Amendment.” Such speech may be “hateful,” Alito agreed, “but the proudest boast of our free speech jurisprudence is that we protect the freedom to express the thought we hate.”

And in any event, Alito continued, the disparagement clause sweeps too broadly because it applies to all disparaging trademarks, including those that disparage racists or sexists. “It is not an anti-discrimination clause,” Alito lamented dryly, but instead “a happy-talk clause.”

Kennedy wrote an opinion that was joined by Ginsburg, Sotomayor and Kagan. Those justices would subject the disparagement clause to a more searching review, on the ground that it amounts to “viewpoint discrimination” – singling out some messages for less favorable treatment based on the views that they express. They reasoned that the clause allows an applicant to register a “positive or benign” trademark, but “not a derogatory one.” Because it “reflects the Government’s disapproval of a subset of messages it finds offensive,” it “is the essence of viewpoint discrimination.” And the Supreme Court’s cases make clear, Kennedy emphasized, that such discrimination is not allowed when, as the trademark program does in this case, the federal government spends money “to encourage a diversity of views from private speakers.”

Kennedy concluded with a reminder that laws that “can be directed against speech found offensive to some portion of the public can be turned against minority and dissenting views to the detriment of all. The First Amendment does not entrust that power to the government’s benevolence.” “Instead,” he noted, “our reliance must be on the substantial safeguards of free and open discussion in a democratic society.”

Although Simon Tam will benefit most directly from today’s ruling, another group was cheering it as well: the Washington Redskins, whose trademarks were cancelled in 2014 on the ground that they were disparaging to Native Americans. A lower court upheld the cancellations, but today’s ruling will breathe new life into the team’s challenge to that decision.