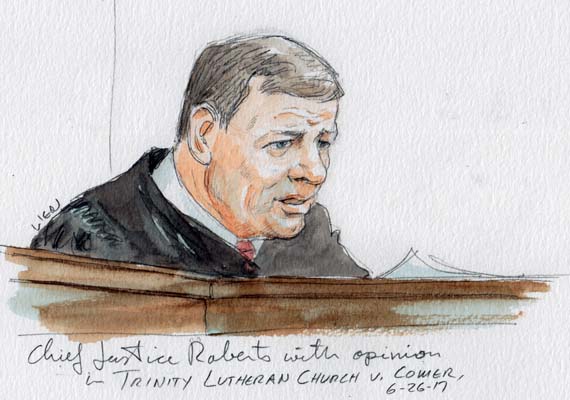 Before Justice Antonin Scalia died last year, the Supreme Court agreed to review a church’s challenge to Missouri’s denial of the church’s application for a grant to resurface its playground. The church contended that its exclusion from the state-run program violated the U.S. Constitution by discriminating against religious institutions, while the state countered that the church can still worship however it wants to – the state just isn’t going to pay for it. Today, in an opinion by Chief Justice John Roberts, the court ruled that the state’s policy did indeed violate the church’s right to free exercise of its religion.

Five years ago, Trinity Lutheran Church applied for a grant from a state program that gives funds to nonprofits to reimburse them for the installation of rubber playground surfaces made from recycled tires. Missouri’s Department of Natural Resources, which administers the playground-resurfacing program, ranked Trinity Lutheran’s application fifth out of 44, but it still did not give the church one of the 14 grants that it awarded. The department explained that the Missouri state constitution bars money from the state treasury from going “directly or indirectly, in aid of any church, sect, or denomination of religion.”

Trinity Lutheran challenged the denial in federal district court, where it argued that the state’s refusal to give it a grant violated both the First Amendment’s free exercise clause, which bans the government from making laws or enacting policies “prohibiting the free exercise” of religion, and the 14th Amendment’s equal protection clause, which requires a state to apply its laws equally. The lower courts ruled for the state, and the Supreme Court agreed to weigh in on January 15, 2016.

With his relatively brief – only 15 pages – opinion, Roberts seemed to regard the case as a relatively straightforward one. He explained that under the Supreme Court’s cases interpreting the free exercise clause, the government needs a very good reason to rely on someone’s religious identity to deny him a benefit that would otherwise be generally available. And here, he continued, that is exactly what the state’s policy does: It discriminates against the church by barring it from receiving the playground funding just because it is a church. The church cannot both continue to operate as a church and receive the funding; it has to choose between the two. Moreover, Roberts added, the state has not provided anything close to the kind of compelling reason that it would need to exclude the church from the program: All it has said is that it wants to try to steer clear of concerns about violating the Constitution’s establishment clause, which bars the government from favoring religion.

In conclusion, Roberts acknowledged that the stakes in this case were relatively low, noting that the result of the state’s policy “is, in all likelihood, a few extra scraped knees” if the church could not replace its gravel playground with the softer rubber surface that the state’s program would fund. “But the exclusion of Trinity Lutheran from a public benefit for which it is otherwise qualified, solely because it is a church,” Roberts continued, “is odious to our Constitution all the same, and cannot stand.”

Justices Anthony Kennedy, Samuel Alito and Elena Kagan joined the Roberts opinion in full. Justices Neil Gorsuch and Clarence Thomas joined almost all of the Roberts decision. In a separate opinion joined by Thomas, Gorsuch suggested that the Roberts opinion left “open the possibility a useful distinction might be drawn between laws that discriminate on the basis of religious status and religious use.” But that line is hard to draw, Gorsuch continued, and the distinction shouldn’t matter anyway. Gorsuch and Thomas also declined to sign on to the third footnote in the Roberts opinion, which emphasized that the issue before the court in this case was “express discrimination based on religious identity with respect to playground resurfacing” and that the court was not weighing in on “religious uses of funding or other forms of discrimination.” Gorsuch agreed that the footnote was “entirely correct,” but he expressed concern that the footnote could be interpreted to indicate that today’s ruling applies only to playground cases “or only those with some association with children’s safety or health.” To the contrary, he concluded, what matters in the Supreme Court’s cases are general principles, which “do not permit discrimination against religious exercise—whether on the playground or anywhere else.”

In contrast, footnote 3 may have been key for Justice Stephen Breyer, who wrote that he agreed “with much of what the Court says and with its result.” But he would not draw any broader conclusions about how the free exercise clause would apply to other kinds of government benefits.

Justice Sonia Sotomayor dissented, in an opinion (joined by Justice Ruth Bader Ginsburg) that she summarized from the bench – a signal that she strongly disagrees with today’s ruling. Sotomayor lamented that even if the court depicted the case as a simple one “about recycling tires to resurface a playground,” it was in fact “about nothing less than the relationship between religious institutions and the civil government—that is, between church and state.” “The Court today,” she continued, “profoundly changes that relationship by holding, for the first time, that the Constitution requires the government to provide public funds directly to a church.” But if the separation of church and state means anything, she concluded, “it means that the government cannot, or at the very least need not, tax its citizens and turn that money over to houses of worship. The Court today blinds itself to the outcome this history requires and leads us instead to a place where separation of church and state is a constitutional slogan.” Another sign of Sotomayor’s discontent: She closed both her written opinion and her summary from the bench with the phrase “I dissent,” rather than the traditional phrase “I respectfully dissent.”

Under the court’s normal procedures, the justices would have heard oral argument in the church’s case in either the spring or fall of 2016. But instead the case languished on the court’s docket, without any explanation from the court, until April 19. By that time, Justice Neil Gorsuch had been confirmed to the court, and the new Missouri governor, Eric Greitens, had announced a shift in the state’s policy: Going forward, the department could give grants to religious groups to fund (among other things) recycled playground surfaces like the one for which the church had applied. In the end, the shift in policy did not make a difference in the court’s ruling: In the first footnote in the case, the court explained that it could still rule on the merits of the church’s challenge because the state had not made “absolutely clear” that it would not change the policy back again. And, although there had been speculation that the justices were holding off hearing oral argument in the case to avoid a 4-4 deadlock, the fact that Sotomayor and Ginsburg were the lone dissenters indicates that, at least in the end, the justices were not all that closely divided.