Looking for a landmark ruling on patent exhaustion, the patent community got just that in the Supreme Court’s decision this morning in Impression Products, Inc. v Lexmark International, Inc. The court has been deciding a steady diet of patent cases for much of the last decade and has been rejecting the U.S. Court of Appeals for the Federal Circuit’s rulings in those cases almost routinely; the Federal Circuit is now 0 for 5 in the current term, by far the worst record of any of the federal courts of appeals. Most of those decisions reflect a cautious reluctance on the part of the court to say more than is necessary to decide the case before it, founded on an evident reluctance to wreak far-reaching and destabilizing consequences on the innovative markets for which patent doctrine is so important. In this case, by contrast, the opinion of Chief Justice John Roberts displays a confident and assertive verve, full of quotable maxims certain to populate the U.S. Reports for decades to come. More surprisingly, the opinion attracted the votes of all the eight active justices except for Justice Ruth Bader Ginsburg (who dissented only from the court’s resolution of the cross-border question discussed at the end of the post). 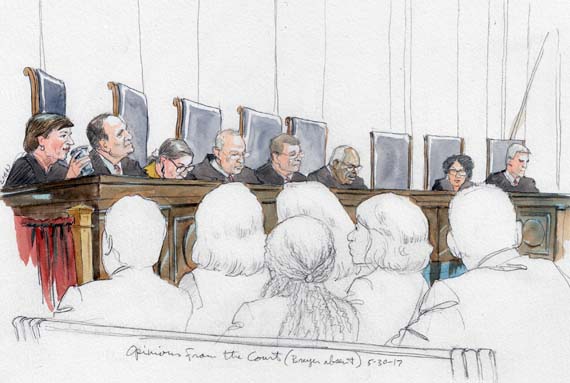 The case involves the doctrine of “exhaustion,” under which a patentholder’s rights to enforce its patent ordinarily are “exhausted” with regard to any particular object at the moment the patentholder sells the object. As applied to this case, for example, Lexmark’s rights to control the use of its patented refillable print cartridges would be “exhausted” when it sells those cartridges to retail buyers, even if Lexmark conditions the sale on the promise that the buyer will not refill the cartridge. That, at any rate, is the argument of Impression Products, which makes a business out of refilling Lexmark cartridges in violation of those agreements. Lexmark’s argument, by contrast, supported by a quarter-century of Federal Circuit precedent, is that modern commerce requires that innovators have the flexibility to devise contracting structures that segment the market into separate sectors, each of which gets a different price commensurate with the uses to which products will be put in that sector.

The court could hardly have been more unequivocal in its broad embrace of a mandatory doctrine of exhaustion. For the court, the doctrine seemed to devolve ineluctably from the first principles of the law of patents:

When a patentee chooses to sell an item, that product is no longer within the limits of the monopoly and instead becomes the private, individual property of the purchaser, with the rights and benefits that come along with ownership. A patentee is free to set the price and negotiate contracts with purchasers, but may not, by virtue of his patent, control the use or disposition of the product after ownership passes to the purchaser. The sale terminates all patent rights to that item.

The court praised the “impeccable historic pedigree” of the exhaustion doctrine, tracing its lineage back to the common law’s refusal to permit restraints on the alienation of chattels.” With a flourish of rhetorical excess, the court suggested that post-sale conditions on alienation “have been hateful to the law from Lord Coke’s day to ours and are obnoxious to the public interest. The inconvenience and annoyance to the public that an opposite conclusion would occasion are too obvious to require illustration.”

Dialing down the tone a bit, the court went on to add wryly that “an illustration never hurts,” following up with a folksy anecdote about “a shop that restores and sells used cars.” For the justices, that “business works because the shop can rest assured that, so long as those bringing in the cars own them, the shop is free to repair and resell those vehicles.” Uninfluenced by the claims in the briefing that more reticulated contracting structures are integral to modern technology industries, the court concluded that “extending the patent rights beyond the first sale would clog the channels of commerce, with little benefit from the extra control that the patentees retain.” The court pointedly noted that “increasingly complex supply chains [well might] magnify the problem,” offering a citation to an amicus brief suggesting that a “generic smartphone … could practice an estimated 250,000 patents.”

The court underscored its uncompromising vision of exhaustion in a section of the opinion explaining that the Federal Circuit “got off on the wrong foot” when it characterized exhaustion as “a default rule” that “presumptively grants authority to use [an item] and resell it.” For the court, any suggestion of a “presumptive” aspect of exhaustion is far too tentative:

The misstep in this logic is that the exhaustion doctrine is not a presumption about the authority that comes along with a sale; it is instead a limit on the scope of the patentee’s rights. The right to use, sell or import an item exists independently of the Patent Act. What a patent adds … is a limited right to prevent others from engaging in those practices. Exhaustion extinguishes that exclusionary power.

The opinion also dismissed the idea (prominent in Federal Circuit jurisprudence) that “it would make little sense to prevent patentees from [imposing post-sale restrictions] when they sell directly to consumers” if they easily can use a license to accomplish the same thing. The court agreed that restrictions a patentholder imposes in a license are enforceable under patent law, but it explained that this is true only “because a license does not implicate the same concerns about restraints on alienation as a sale.” Returning again to its focus on the objects that embody the patented invention, the court explained:

Patent exhaustion reflects the principle that, when an item passes into commerce, it should not be shaded by a legal cloud on title as it moves through the marketplace. But a license is not about passing title to a product, it is about changing the contours of the patentee’s monopoly. … Because the patentee is exchanging rights, not goods, it is free to relinquish only a portion of its bundle of patent protections.

But enforcing licensing restrictions, the court cautioned, could not be permitted to interfere with the free flow of commerce. Any sale of goods permitted by a license must be treated “for purposes of patent exhaustion, as if the patentee made the sale itself. The result: The sale exhausts the patentee’s rights in that item.”

As it happens, the case involved cartridges sold by Lexmark both in the United States and overseas. The overseas transactions present a harder problem because of the court’s recent efforts to limit the extraterritorial effect of United States statutes. Viewed through the lens of that effort, there is something incongruous about holding that a foreign sale exhausts the rights of a patentholder to enforce its patent with regard to activity in the United States. As you might expect from the tone of the passages summarized above, that problem did not long detain the court, which unambiguously held that “[a]n authorized sale outside the United States, just as one within the United States, exhausts all rights under the Patent Act.”

Sidestepping the general question of extraterritorial interpretation, the court instead pointed to its 2013 decision in Kirtsaeng v. John Wiley & Sons holding that the exhaustion doctrine of copyright law (the “first sale” doctrine) “applies to copies of a copyright work lawfully made and sold abroad.” In a passage that surely will grate on the sensibilities of the intellectual-property scholars who spend so much time writing and teaching about the foundational distinctions between copyright and patent protections, the court concluded that “differentiating the patent exhaustion and copyright first sale doctrines would make little theoretical or practical sense,” because the two “share a strong similarity and identity of purpose,” and “many every day products … are subject to both patent and copyright protections.” Resuming the high-flown tone of the early parts of the opinion, the court rested its decision on “a historic kinship between patent law and copyright law,” a “bond [that] leaves no room for a rift on the question of international exhaustion.”

Finally, with considerable repetition of its earlier discussion, the court emphasized the apparently self-evident fairness of a rule of international exhaustion that leaves complete control in the hands of the purchaser:

A purchaser buys an item, not patent rights. And exhaustion is triggered by the patentee’s decision to give that item up and receive whatever fee it decides is appropriate for the article and the invention which it embodies. … [T]he right to exclude just ensures that the patentee receives one reward – of whatever amount the patentee deems to be satisfactory compensation – for every item that passes outside the scope of the patent monopoly.

It is hard for anybody to claim surprise when the Supreme Court rests an all-but-unanimous reversal of the Federal Circuit on the failure of that court to bring patent law into conformity with broad and general jurisprudential norms. Nor is it a surprise that the court rebuffed yet another of Lexmark’s efforts to limit the aftermarket for its print cartridges; the last time Lexmark was before the court it lost 9-0 on a Lanham Act issue arising out of the same cartridge program. Still, as with so many areas of the Federal Circuit’s jurisprudence, the Supreme Court has stayed its hand from considering this problem for a generation, leaving the high-tech community to develop increasingly intricate patterns of contracting, all premised on the enforceability of regimes of post-sale patent enforcement. The 16 amicus briefs filed in support of Lexmark document the far-ranging reliance on those devices.

In the end, though, the opinion shows a Supreme Court persuaded that the Federal Circuit did not merely err in some detail or nuance, but was as fundamentally misguided as it was when it came up with the venue rules discarded just last week in TC Heartland LLC v. Kraft Foods Group Brands, LLC. At bottom, when the court is minded to destroy the status quo, it knows how to do it, and this opinion provides a textbook exemplar. It will take years before we can observe the transactional structures that will emerge to protect the interests that have relied on the Federal Circuit’s lax rules about patent exhaustion. About the only thing we can say about them is that it will be harder, much harder, to implement them than it was before this sure-to-be-landmark decision.