Three decades ago, James McWilliams was convicted of the robbery, rape and murder of convenience store clerk Patricia Reynolds. An Alabama judge sentenced McWilliams to death, rejecting both his pleas to consult with an independent psychiatrist about psychiatric records that his attorney had recently received and his argument that he suffered from serious mental health issues. That denial of an independent expert, McWilliams’ attorney told the justices today, violated his client’s constitutional rights, established in a Supreme Court decision, Ake v. Oklahoma, issued just a few months after Reynolds’ murder. After an hour of oral argument this morning, the court’s four more liberal justices seemed to agree. And perhaps most critically for McWilliams, Justice Anthony Kennedy also seemed persuaded. 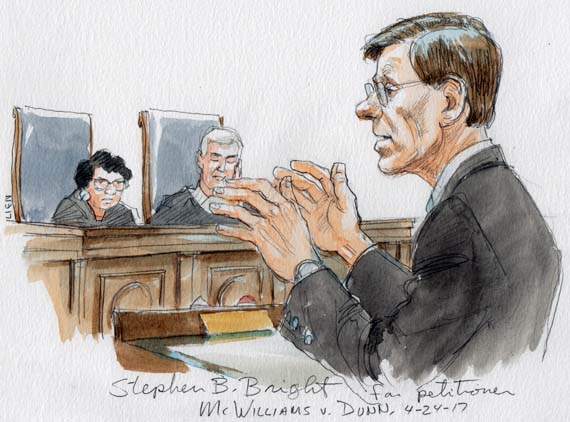 Under federal laws governing efforts by state prisoners like McWilliams to obtain relief from their convictions and sentences in federal courts, the right that they contend was violated must have been clearly established when their convictions became final in state court. Arguing for McWilliams, Stephen Bright emphasized that the court’s 1985 opinion in Ake had “clearly established” that a defendant is entitled to help from “an expert independent of the prosecution” when his mental health is a “significant factor” in the case.

Kennedy pressed Bright to explain exactly how the court should make that determination. If, at least for the sake of argument, Kennedy suggested, Ake was actually ambiguous on whether the defendant is entitled to help from an independent expert, but “over time, it became clear that” the expert should only be “consulting with the defense and not with the prosecution,” should the court say “that the basic right was clearly established, and that over time, we are simply making a refinement,” or would a ruling for McWilliams instead be “establishing a new right”?

Bright initially resisted, responding that the ruling was “quite clear.” But later on, he seemed to realize that Kennedy may have been throwing him a lifeline, and he assured the justices that “what really has happened here is refinement” of the principle first announced in Ake.

Chief Justice John Roberts was skeptical. McWilliams, Roberts observed, had pointed to several examples of how the right to an independent expert was clearly established in Ake, through the court’s descriptions of the kind of assistance an expert would provide. But some of those examples, Roberts suggested, did not “entail partisanship of any kind.” And a few minutes later, Roberts noted that a well-respected criminal law treatise had described the court’s decision in Ake as “deliberately ambiguous” on the question presented by McWilliams’ case.

And Justice Samuel Alito was dubious that, even if the state made an expert available to defendants like McWilliams, an expert “who is chosen by the court and paid by the court can ever” be truly “part of the defense team.” At most, Alito seemed to say, the expert would be a neutral expert.

The court’s newest justice, Neil Gorsuch, chimed in with what he viewed as another potential problem with the rule that McWilliams was advocating. If the court were to rule that a defendant has a right to a partisan expert, where should it draw the line in terms of other assistance for defendants? “Would we also have to apply the same rule in other kinds of medicine, perhaps? Forensic science?” And would it mean that the defendant is also entitled to a partisan lawyer, rather than just a competent one?

The court’s four more liberal justices tried to bypass some of these potential problems by shifting the focus of the conversation away from labels like “neutral,” “partisan” and “independent” to a more straightforward rule that, in their view, was grounded squarely in Ake. As Justice Stephen Breyer put it, “The defense has to have somebody who will conduct an appropriate examination, assist in evaluation, preparation, and presentation of the defense. So why do we have to say more than” that? In this case, Breyer continued, “it seems to me that this defendant certainly did not get that help.” 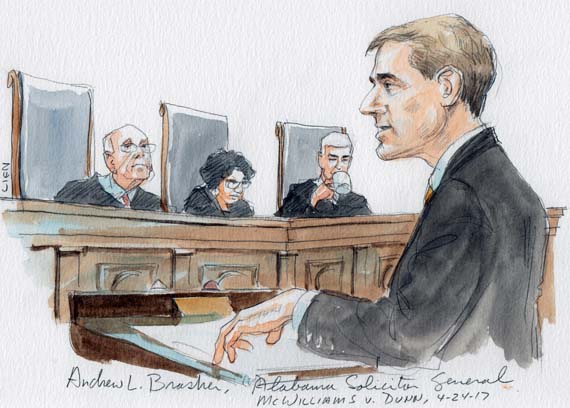 Justice Elena Kagan made a similar point, telling Alabama Solicitor General Andrew Brasher, who argued on behalf of the state, that the “theme” of the court’s decision in Ake was that “you have to give the indigent defendants, just as you give the wealthier defendant, the tools that they need to establish what they want to establish about mental health. And then that’s consistent with these words that are repeated in the holding and elsewhere” in Ake.

Bright echoed these ideas in his rebuttal, reminding the justices that “what we come back to at the end on this case, is the proper working of the adversary system. And this certainly doesn’t put the defense in an equal position with the prosecutor, not by a long shot, but it at least gives the defense a shot, at least gives them one competent mental health expert that they can talk to, understand what the issues are, present them as best they can.”

In what McWilliams could view as a positive sign, Justice Ruth Bader Ginsburg asked Bright whether, if his client were to prevail, he would get a new sentencing hearing. (The answer was yes.) If – as it appears – McWilliams can pick up a vote from Kennedy in addition to the four more liberal justices, that new hearing might not be too far away.