This morning the Supreme Court handed a partial victory to a group of Virginia voters who argued that the 12 state legislative districts in which they live were the result of racial gerrymandering. The justices agreed with the challengers that a lower court had applied the wrong legal standard when it upheld all 12 districts, and the court ordered the lower court to take another look at 11 of those districts. This means that the battle over the redistricting maps that were drawn for Virginia’s state elections after the 2010 census will continue on well into this year, even as the state prepares to hold new elections in November. 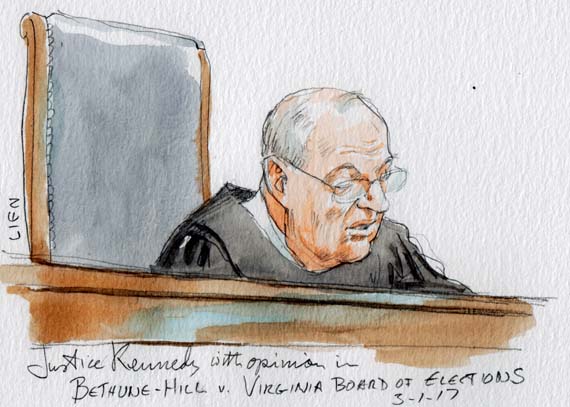 The 12 districts at the heart of today’s case were drawn with a specific goal in mind for each: an African-American population of 55 percent. Both the Virginia House of Delegates and the U.S. Department of Justice signed off on the maps, but the plaintiffs in today’s case argue that the architects of the maps engaged in racial gerrymandering. They contend that the 12 districts were illegally packed with African-Americans, which in turn diluted the voting strength of African-Americans in other nearby districts, making the other districts friendlier to Republicans.

In an opinion by Justice Anthony Kennedy, the Supreme Court agreed with the challengers that the district court used the wrong test in deciding whether race was the primary factor motivating the legislature to pack black voters into the 12 districts. The district court had looked at whether the challengers had shown “an actual conflict between the enacted plan and traditional redistricting principles.” Although such a test might at one point, the court suggested, have been “reconcilable” with the court’s cases, later cases had made clear that race can be the primary factor even when a redistricting plan is consistent with traditional redistricting criteria. To be sure, the court emphasized, it may be difficult for a challenger to show that race was the predominant factor without demonstrating a conflict between the plan and traditional criteria. Indeed, it noted, there are no cases in which the Supreme Court has not either upheld a finding that race was the predominant factor or sent the case back for a ruling on that issue “without evidence that some district lines deviated from traditional principles.” But it left the door open for challengers to make the required showing of racial predominance, even without a conflict, based on – for example – “direct evidence of the legislative purpose and intent” or “circumstantial evidence of a district’s shape and demographics.”

But from here on, the court and the challengers parted ways. Although the challengers had urged the court to apply the correct standard and reverse the district court’s ruling that race was not the primary factor behind 11 of the 12 districts, the justices declined to do so. Emphasizing that the Supreme Court is “a court of final review and not first view,” the court suggested that the district court, rather than the Supreme Court, is best suited to make that determination in the first instance and, if it finds that race was the predominant factor in drawing the district lines, to decide whether the districts nonetheless pass constitutional muster.

The justices also rejected the challengers’ claim that the district court was wrong when it upheld District 75, even after concluding that race did play a predominant role in its drafting. Contrary to the challengers’ contention, the court ruled, the state does not need to show that its choices in drawing the district were “actually necessary” to comply with Section 5 of the Voting Rights Act, which requires some state and local governments to obtain approval before making changes to their voting procedures. (Virginia had been subject to this requirement until 2013, when the Supreme Court struck down the formula used to determine which states must follow Section 5’s “preclearance” requirement.) Instead, the court explained, it was enough that the state had “good reasons to believe it must use race in order to satisfy the Voting Rights Act” – an easier standard to meet.

And here, the court concluded, the state has met that requirement. Determining what percentage of minority residents Section 5 requires for a particular district is, the court observed, “a difficult task” that – among other things – requires a map’s architects to analyze “the electoral behavior within” a specific district. In this case, the court said, the Virginia legislature did precisely that, with the legislators involved making “good-faith efforts” “to achieve an informed bipartisan consensus.”

The court’s opinion suggests that state officials are entitled to some leeway in making these kinds of analyses and determinations. “Holding otherwise,” it explained, “would afford state legislatures too little breathing room, leaving them ‘trapped between the competing hazards of liability’ under the Voting Rights Act and the Equal Protection Clause.”

Two of Kennedy’s colleagues declined to sign on to all of his opinion for the court. Justice Samuel Alito agreed that District 75 does not violate the Constitution, and he agreed with the court that the district court should take another look at the other 11 districts. But both he and Justice Clarence Thomas would have required the lower courts to apply a more stringent standard on remand. And Thomas would have gone further and struck down District 75, on the ground that the state’s interest in complying with the Voting Rights Act cannot be especially strong when, in his view, Section 5 itself is unconstitutional. In any event, Thomas continued, the state’s use of race in drawing District 75 violated the Constitution because it went further than necessary to comply with Section 5.

Thomas made clear that he regards the Supreme Court itself as “at least as responsible as the state legislature for these racially gerrymandered districts.” Not only has the court left Virginia “without clear guidance about its redistricting obligations under” Section 5, but it has also placed the state in an impossible position, in Thomas’ view: On the one hand , it must “make a deliberate and precise effort to sort its citizens on the basis of their race” to comply with the Voting Rights Act; but on the other, such a “result is fundamentally at odds with our ‘color-blind’ Constitution.”

Kennedy’s opinion for the court depicted today’s decision as a relatively straightforward one that relies on existing cases rather than making new law. That may explain why today’s ruling was released alone, while the other gerrymandering case argued the same day – McCrory v. Harris, a challenge to two North Carolina congressional districts, one of which the lower court described as a “textbook example of racial gerrymandering” – is still pending. But even if the Supreme Court believes that today’s ruling does not break any new legal ground, its choice to send the case back to the lower court means that the dispute could eventually return to the Supreme Court. And given what seems to be the general frustration on the court (at least as expressed at the oral argument in this case) with the steady influx of redistricting cases, that may not be a welcome result for the justices either.