At the oral argument Monday morning in TC Heartland v. Kraft Foods Group Brands, the justices finally got their chance to weigh in on one of the Federal Circuit’s most controversial rules – its longstanding conclusion that corporate patent defendants are subject to suit in any district in which they do business, as opposed to only the state in which they are incorporated. The Supreme Court took the latter view in a 1957 decision (Fourco Glass v Transmirra Products), but the Federal Circuit has long thought that decision was irrelevant under the modern statutory venue framework.

The case involves the interplay between two venue statutes, a general statute (Section 1391) and one that applies only to patent cases (Section 1400). Section 1400 states that a “civil action for patent infringement may be brought in the judicial district where the defendant resides”; In Fourco, the last time the Supreme Court examined the statute, it concluded that corporations reside in “the state of incorporation only.” The general venue statute (Section 1391), by contrast, states: “For all venue purposes … [a corporation] shall be deemed to reside, if a defendant, in any judicial district in which such defendant is subject to the court’s personal jurisdiction with respect to the civil action in question.” Because large businesses are likely to have sufficiently pervasive business activities to be subject to personal jurisdiction throughout the nation, that section makes venue generally appropriate in most districts. The question before the court is which of those two understandings applies.

The justices seemed not at all settled on how to address that problem. Four strands of discussion provide a good characterization of the argument. The first was the idea, pressed repeatedly by Justice Ruth Bader Ginsburg, that it is at this point in time most unusual to limit venue for a business to a single location. Early in the argument, for example, she pressed James Dabney (appearing on behalf of defendant TC Heartland in support of the narrow venue rule): “Is there any other … venue provision in which venue for a corporation is only the place of incorporation?” She seemed particularly incredulous at the idea that the principal place of business should be excluded as an appropriate venue: “[E]ven for diversity purposes a corporation is … diverse based on not simply its place of incorporation, but [also] its principal place of business. Principal place of business counts. It doesn’t count under 1400!” 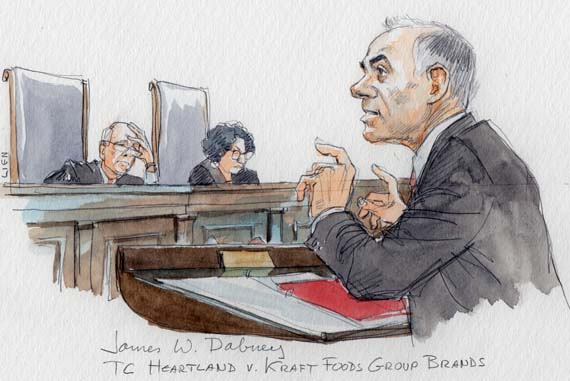 [Y]ou are asking us to say that venue in a patent infringement case is only where the entity is incorporated or comparable to that, and you have acknowledged that there is no other venue provision for any other kind of claim that is so limited to just the place of incorporation.

A second point, cutting the other way, is the difficulty of identifying exactly what Congress has done that could be treated as an intention to overturn Fourco. The point was made most clearly by Chief Justice John Roberts during the presentation of William Jay (appearing on behalf of plaintiff Kraft, seeking a broad venue rule): “[T]he current statute says ‘except as otherwise provided by law.’ And I would have thought that excluded overturning the Fourco decision.” 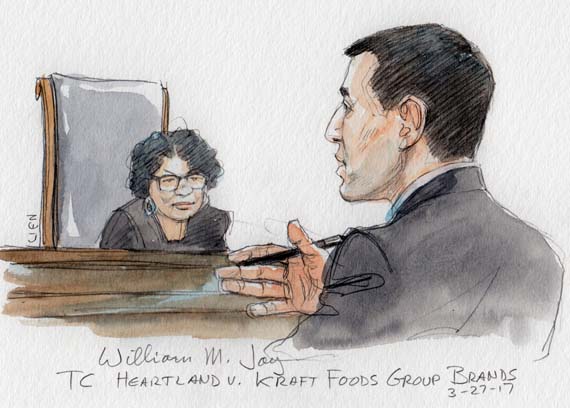 Similarly, Justices Ginsburg and Elena Kagan both noted that the American Law Institute proposal (on which the modern version of Section 1391 was based) recommended that Congress repeal Section 1400; Congress’ failure to do that seems to suggest an intention to leave Fourco in place. As Justice Kagan put it, “the ALI wanted to get rid of 1400, and Congress didn’t do that.”

A third point related to the problem of unincorporated associations. This case, for example, like many patent cases, involves a patent held by a limited liability company rather than a corporation. Traditionally, the rules of patent venue, as settled before World War II, have treated all unincorporated associations – partnerships, limited liability companies and the like – precisely the same as corporations. That is not, of course, the trend of modern venue statutes, which treat corporate venue distinctly from (and more broadly than) the venue of other associations.

The problem for the justices, though (especially for Justice Stephen Breyer), was how the court could announce a general rule in this case for corporations (the group for which the Fourco rule is most clearly out of step with contemporary conceptions of venue) when the case before it involves a limited liability company rather than a corporation. Jay engaged in a long colloquy with Breyer in which he explained that he did not want the court to dismiss the case on the basis that the corporate problem was not presented. Rather, Jay emphasized the LLC/corporation distinction as a problem that makes continued reliance on Fourco increasingly odd. Eventually Breyer suggested that the justices could ignore the corporate/LLC distinction as a separate basis for Texas venue in this case, decide the corporate question, and, if the court did not broadly overrule Fourco for corporations, allow Kraft to raise the problem before the Federal Circuit.

A fourth point seemed the most surprising – the general lack of interest among the justices in the horror stories about the concentration of venue in the Eastern District of Texas. The subject did come up, but in such a desultory way that it does not seem to be all that important to their thinking about the case. If anybody seemed concerned about the problem it was Roberts, who responded to a comment made by Jay with the interjection: “So we shouldn’t worry that 25 percent of the nationwide cases are there?” The other justices who addressed the problem, though, seemed to range from ambivalent to uninterested. In the ambivalent group, Kagan commented at one point that the “complaint” of the defendants is that the current rule “allows a kind of forum shopping,” in which plaintiffs can say “‘let’s go down to Texas where we can get the benefit of a certain set of rules.’” And Justice Anthony Kennedy simply asked whether “the … generous jury verdicts enter into this or is that something we shouldn’t think about?” Most pointedly, Breyer made it quite clear that the problem is not important to him, saying, “these amici briefs … they’re filled with this thing about a Texas district which they think has too many cases. What’s th[at] got to do with this?”

I come away from the argument with the strong impression that the vocal pleas of defendants seeking a limitation of venue have for the most part fallen on deaf ears. To the court, the case is much more about the jurisprudential problem of how – or whether – an old decision of the Supreme Court can cease to be binding without Congress ever really taking direct steps to eradicate it. Approached that way, the dispute does not lend itself to easy resolution. I would put this one down for a long period of deliberation.