In 2011, Simon Tam tried to register The Slants, the name of his rock band, as a trademark – a word, name or symbol used to identify a product and to identify its source. Tam had named his band The Slants to bring attention to discrimination against Asian-Americans, but the U.S. Patent and Trademark Office rejected his application. The PTO explained that a provision of the Lanham Act bars the government from approving trademarks that contain “matter which may disparage … persons, living or dead, institutions, beliefs, or national symbols.”

The U.S. Court of Appeals for the Federal Circuit reversed. It agreed that the mark Tam was seeking to register was “disparaging,” but it concluded that the Lanham Act’s ban on the registration of disparaging marks violates the Constitution. The Supreme Court agreed to weigh in last year, and after nearly an hour of oral argument yesterday it seemed poised to agree with the lower court. That could be good news for the Washington Redskins, whose case is now on hold in the U.S. Court of Appeals for the 4th Circuit after the NFL team’s trademarks were cancelled in 2014.

Arguing on behalf of the federal government, Deputy Solicitor General Malcolm Stewart emphasized that the Lanham Act’s disparagement bar does not limit the ability of the mark’s owner to use the mark or express himself. Instead, he contended, the disparagement provision is merely a “reasonable limit on access to a government program.” 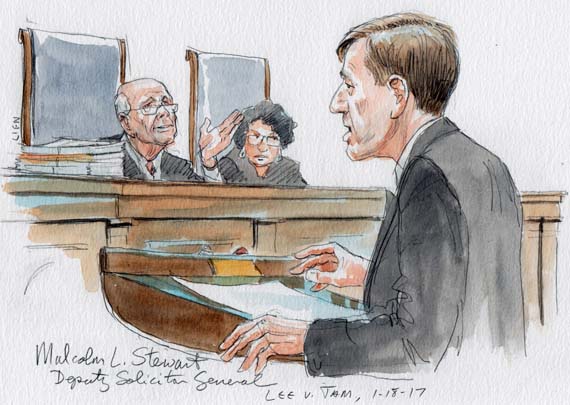 Stewart was quickly peppered by a barrage of questions from virtually all of the justices. Chief Justice John Roberts told Stewart that he was “concerned that your government program argument is circular.” When the holder of a mark complains that the government is not registering that mark because it is disparaging, Roberts observed, the government’s response is that it runs a program that doesn’t register disparaging marks. “It doesn’t seem to me to advance the argument,” Roberts said.

When Stewart responded that trademark law imposes several different restrictions on the registration of trademarks “that really couldn’t be placed on speech itself,” Justice Stephen Breyer joined the fray. Those other restrictions, Breyer observed, are related to “the ultimate purpose” of a trademark: identifying the source of a product. How is the bar on disparagement – which, he noted, would allow you to say something nice about a minority group but not something disparaging – serve that purpose?

Justice Elena Kagan then stepped in. Government programs, she noted, generally can’t distinguish between different kinds of speech based on the viewpoints expressed in that speech. But why, she asked, isn’t the disparagement bar a “fairly classic case of viewpoint discrimination”?

Ginsburg chimed in to voice yet another “large concern”: that the disparagement provision is too vague. Referring to a list provided to the justices that identifies things that were or were not trademarked, she observed that the word “Hebe” appeared on both sides of the list. It was “okay in one application,” she pointed out, but not in another. Stewart’s answer – that the Patent and Trademark office receives 300,000 trademark applications every year, so that it’s “not surprising that there will be some potential inconsistency” – didn’t seem to mollify either Ginsburg or Sotomayor, who queried whether Stewart’s answer wasn’t just “another way to say it’s not clear enough to get it right.”

Arguing for Simon Tam, the lead singer of The Slants, attorney John Connell took a firm stance, from which he refused to budge. When Justice Anthony Kennedy characterized his position as being that the “First Amendment protects absolutely outrageous speech insofar as trademarks are concerned,” Connell agreed that the statement was “correct.” 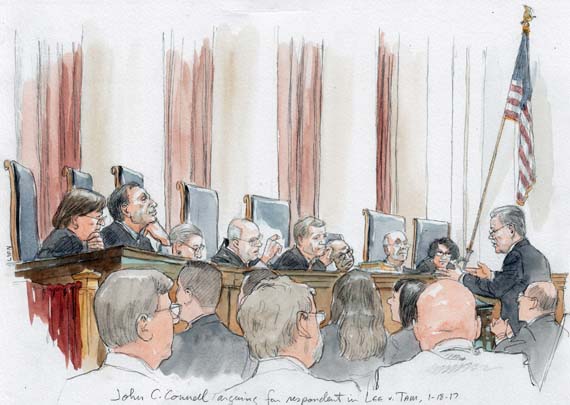 Sotomayor saw the scenario as different from most First Amendment contexts. Tam and his band, she pointed out, can still call themselves The Slants, advertise themselves as The Slants, and sign contracts. They just can’t stop someone else from trying to use the same trademark. But even then, she continued, they would still have recourse because they can sue under other causes of action. Their speech, she concluded, “is not being burdened in any traditional way.”

Connell responded that Tam “is denied the benefits of legal protections that are necessary for him to compete in the marketplace with another band.” That answer, as well as Connell’s responses to the other justices’ questions, did not necessarily satisfy the justices, but his strategy of declining to give an inch may well prove effective in the end. Even if the justices saw flaws and inconsistencies in his arguments, they seemed to regard Tam’s position as preferable to the statute (and the government’s defense of it). We’ll know for sure by summer.

Today at the court:

A nuts-and-bolts question of civil procedure. After an appeal is decided, do courts have discretion to limit the administrative “costs” that the prevailing party can recover from the losing party?

Justices to consider awards of costs of appellate litigation - SCOTUSblog

In 2019, the Supreme Court limited the scope of a federal law that bans people convicted of felonies from having a gun. Up this morning at the court: back-to-back cases that will decide how many felon-in-possession convictions will need new trials or pleas under that 2019 ruling.