When Acting Solicitor General Ian Gershengorn took the lectern today in Ziglar v. Abbasi, he attempted to paint a portrait of déjà vu all over again. The three consolidated cases before the Supreme Court today were brought by a group of Muslim and Arab men who were in the United States illegally and were arrested after the September 11, 2001, attacks; they claim that their rights were violated when they were held in detention centers under unreasonably harsh conditions until they were cleared of any connection to terrorism, even though federal officials knew that they had no connection to terrorism, solely because of their race and ethnicity. According to Gershengorn, today’s cases were simply a reprise of 2009’s Ashcroft v. Iqbal, in which the justices ruled that a complaint filed by another Muslim detainee, alleging that his harsh treatment in prison violated the Constitution, needed to contain enough facts to demonstrate that the officials he was suing had implemented the policy to discriminate: The plaintiffs in today’s cases, Gershengorn contended, were essentially seeking to hold the same government officials responsible for the same conduct. By the end of the hour, it seemed likely that today’s detainee cases will meet a similar fate as that of Javaid Iqbal. Even strong advocacy from Rachel Meeropol, the lawyer representing the detainees, did not appear to be enough to overcome the justices’ reservations about holding government officials personally responsible for their role in implementing policy following a national emergency – particularly when Justices Sonia Sotomayor and Elena Kagan, two members of the court more likely to be sympathetic to the plight of the detainees, were recused from the case.

Representing former U.S. attorney general John Ashcroft and former FBI director Robert Mueller, Gershengorn focused primarily on whether the detainees could hold the senior government officials individually liable in a federal lawsuit for damages for alleged violations of their constitutional rights – known as a “Bivens” remedy. A ruling from the Supreme Court that extends Bivens to cover today’s cases would be “extraordinary,” Gershengorn warned the justices. Congress, rather than the Supreme Court, is better situated to decide whether there should be a damages remedy against senior officials in cases like these, involving national security. 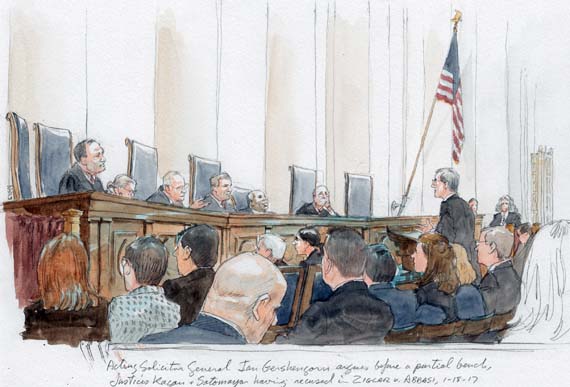 Meeropol – the granddaughter of Julius and Ethel Rosenberg, who were executed in 1953 for spying for the Soviet Union – countered that allowing the detainees in this case to bring a lawsuit would not require the court to extend Bivens, because the case does not implicate any sensitive national security judgments. By contrast, she continued, allowing lawsuits like these is necessary to deter even more excessive exercises of government power in the future. Justice Anthony Kennedy was unconvinced, telling Meeropol she was indeed asking the justices to create a new Bivens cause of action even though they have been reluctant to do so in the past. Chief Justice John Roberts was equally skeptical. The conduct that the detainees are challenging, he stressed, involved the implementation of national security policy in response to the September 11 attacks. “I think that is an extraordinary departure” from earlier Bivens actions, he indicated, and he suggested that allowing the detainees’ lawsuit to go forward would result in concerns by senior officials that they could be held personally liable for damages for actions that they took in formulating the government’s response to situations like the September 11 attacks.

The justices also explored whether, if the detainees cannot bring a Bivens action, they (as well as other, similarly situated plaintiffs) might have other remedies available to them. Roberts posited that they could bring habeas corpus actions in federal court, arguing that they were being detained in violation of the Constitution. Justice Stephen Breyer was dubious, observing that a federal district judge might be reluctant to order prisoners released in the immediate wake of an event like September 11. But years later, Breyer hypothesized, circumstances may have changed, and a remedy should be available. Justice Ruth Bader Ginsburg wondered aloud how detainees could even file habeas petitions when they were incarcerated without access to an attorney or even a telephone. Gershengorn assured her that lack of access to an attorney was a short-lived situation, and that wardens had re-established visits from attorneys by September 20, 2001. And Kennedy asked Meeropol whether any legal proceedings were actually filed in the months shortly after the attacks and detentions. She responded that some habeas petitions were filed, but that the petitions simply resulted in the detainees who filed them being moved to the top of the list to be cleared, without any court having the opportunity to rule on the legality of the detentions. 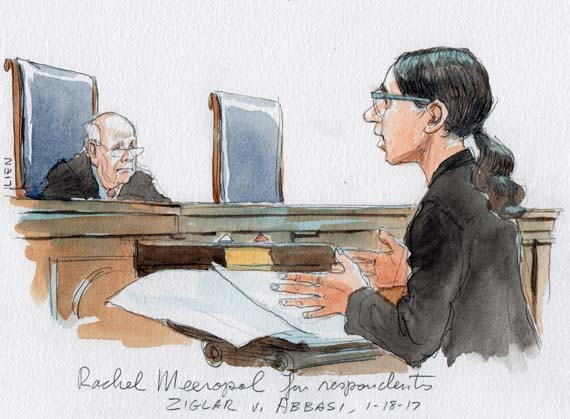 Roberts offered another alternative: an injunctive action to challenge the constitutionality of the detention policy. Such a lawsuit, Roberts contended, would be more appropriate than seeking to hold officials personally liable for damages. Gershengorn readily agreed, telling the justices that the “absence of Bivens is not lawlessness.”

Representing Dennis Hasty and James Sherman, the wardens at the federal detention center where some detainees were held, attorney Jeff Lamken focused on whether his clients were entitled to immunity from suit. Under the Supreme Court’s precedent, an official like Hasty or Sherman will have immunity unless the plaintiff can demonstrate that his conduct violates “clearly established” law – a high bar. What the detainees are asking the court to do, he told the justices, is to hold that local jailers like Hasty and Sherman can be held liable for failing to disregard the FBI’s designations of the risks that the detainees posed. But, he contended, “a reasonable jailer could have understood and believed it lawful in the circumstances of this case to do” what the Bureau of Prisons had instructed them to do – that is, to “hold detainees in restrictive conditions based on those FBI designations until the FBI cleared” them. 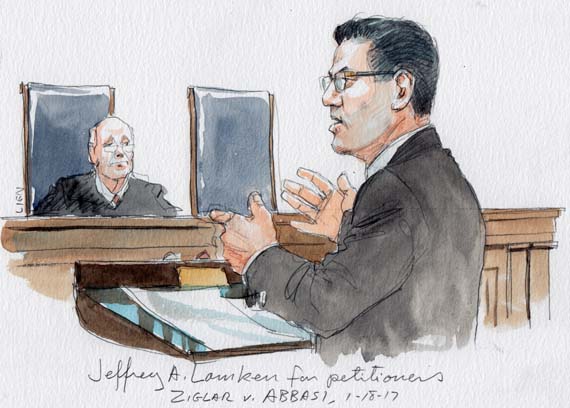 At least a few justices were not particularly receptive to this argument. Ginsburg noted that the lower court had unanimously agreed that some claims against Hasty, based on what Lamken described as “unauthorized abuses by individual guards,” should be allowed to go forward. And Kennedy pointed out that the detainees had alleged that Hasty “deliberately did not take a routine inspection of that particular portion of the prison in order to be willfully blind as to what was going on.”

Lamken pushed back. He told the court that a lawsuit had in fact been filed against the individual guards who were directly responsible for the abuses that the detainees allege. When a report by the Department of Justice’s Office of the Inspector General indicated that there were violations and that discipline was warranted, he concluded, “discipline was meted out.” Lamken’s assurances may have gone a long way to satisfy the justices’ concerns, but the court’s eventual ruling with regard to his clients could be closer than the decision for their more senior counterparts.

Perhaps because of their focus on Bivens and, to a lesser extent, on qualified immunity, the justices seemed to pay less attention to the third issue in the case — whether the detainees’ factual allegations were enough to survive a motion to dismiss. At least Breyer seemed to think that they might be. In a question for Gershengorn, Breyer acknowledged that, after an event like September 11, the government’s initial reaction might well have been to detain a large group of people and then deal with the implications later. But, he asked somewhat incredulously, weren’t the detainees held for eight months, even after local FBI offices reported that there was no reason to suspect them of terrorism?